We should have known. Not only because the HBO series The Undoing is adapted from author Jean Hanff Korelitz’s 2014 novel titled — yes — You Should Have Known, but because the truth was in front of us the whole time.

The six-episode series from writer David E. Kelley and director Susanne Bier centered on Grace Fraser (Nicole Kidman) as the floor falls out from her picture-perfect life. Following the murder of a young mother at her son’s elite private school, Grace learns her husband, Jonathan (Hugh Grant), had been having an affair with the woman. But as Jonathan maintained his innocence, we were left asking, Who really killed Elena Alves?

In the end, The Undoing was not so much a whodunit — as much we all pretzeled it to be one, concocting endless theories as to why every other character did it — but a character study of a woman realizing just how little she knew. After weeks of cliffhangers and red herrings, Sunday’s finale episode, “The Bloody Truth,” confirmed it was indeed Jonathan who killed Elena (Matilda De Angelis).

“To that extreme extent that they were freaking out while the series was going on, prior to the final episode, I guess it was to be expected,” Bier laughs of the reaction to Sunday’s finale. “But it was still crazy, right?”

On Monday, Bier phoned ET to discuss why there was never any possibility of someone else being the killer and the possibility of The Undoing (which HBO is billing as a limited series) coming back for a second season.

ET: Did Hugh know from the onset that he was, indeed, the killer?

SUSANNE BIER: Oh, yes. Of course! I mean, there was never any doubt that he was going to be the killer. The whole conceit for the show — the reason for making the show and what drew me, as well as other things — was the notion that you color your own reality according to your wishes. You do see what you want to see. Even if you’re the most insightful, brilliant, clever person, it still happens to you. Essentially, we’ve taken the audience on the ride that Jonathan has taken Grace [on], and that was the whole point of it. So, there was never any doubt that it had to be Jonathan. By the way, he’s the only one who has a real motive and where all the evidence points to him. If you take a step back and use your rationale, he’s the only one where it really makes sense.

That did not stop anybody from giving a motive to every single other character on this show. Extras, too! Everyone was a suspect.

I know! [Laughs] It’s so funny, my parents never watch anything, and I’ve been having lunch with them every Tuesday — we’re one day later, so it’s on Monday night — and every Tuesday, my father has been theorizing about who it’s going to be. It’s very clear that that’s what happens and that is human nature. But that’s also been the fun of it.

Did you have a favorite theory of who the murderer could be, either from your parents or that you saw on social media?

A lot of people pegged Lily Rabe’s character going into the finale. She was the prime suspect, and turns out, she was just a good friend.

I guess that the fact that [Jonathan] said he had an affair earlier, I think people thought that that was possibly her. [Laughs] It’s fun that everybody is trying to add things on.

To what you spoke to earlier, I like that there was not a big finale twist that, for lack of a better term, undid Grace’s undoing. Because unwittingly marrying a cheater is one thing — that happens all the time — but she missed that her husband is also a sociopath and also a murderer. Having someone else be the killer would have let Grace off the hook a little bit.

Agreed. I totally agree. But when we slowly realize in the court case that she’s out to get him, I think that becomes very interesting and slightly unsettling. When [Jonathan] accuses Henry is the sort of final straw for her — she realizes he’s a dangerous man — and then she starts trying to figure out what to do about it. 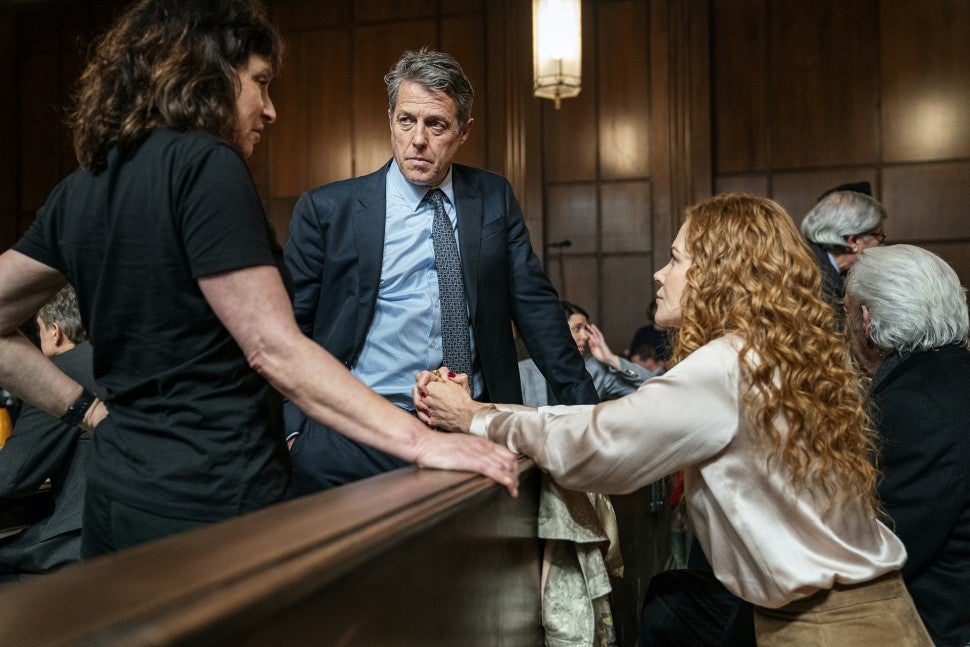 Obviously, some viewers were expecting a finale twist if they were coming up with all of these alternate theories. Knowing from the beginning that this was the story and Jonathan is the killer, were you at all concerned those viewers would be disappointed in the end?

Look, I don’t think you can do a series where people have this many theories without some people being disappointed. Or not being disappointed, but being taken aback by it all being there in front of them from the beginning. But I’m hoping that — it might be pretentious to say — the sort of philosophical or the existential content, which is that whole thing of us wanting to recreate the reality according to our wishes, I just feel that it’s hugely important, hugely recognizable, and I think we’ve all been there. We don’t have to have had a love relationship with somebody who’s a sociopath, but we’ve all been talking to somebody who we later find out actually was beating up his wife, or whatever. Something. And I think faced with contact with someone who can do that is such a scary and interesting thing that it’s worthwhile talking about, worthwhile dealing with, and certainly worthwhile making a TV series about.

The twisting and turning of the finale really came from Grace’s testimony and what ensued when Jonathan tried to run. How did you and David find your way to what you wanted this finale to be?

It took quite a lot of fine-tuning, because there were so many elements in it and we wanted to make sure to pick the right choices. But David is a brilliant writer and nailed it, and it was a lot of fun to film.

Do you think Henry had any concerns about going with his dad?

Yeah, I think he was worried about it. When Jonathan wrote, you know, “This might be our last chance,” I think Henry felt that. I think Henry felt a sadness of losing his dad, and he wanted to have that last breakfast with him. He thought they were going for breakfast. He had no idea he was going to be kind of kidnapped onto the most crazy road trip. But he was, because his father was a selfish sociopath who could only see things from his own point of view, when it came down to it.

Did the series always end in the helicopter away from the bridge, or did you consider showing anything further after that sequence?

I’m sure this is the first time you’ve ever been asked this: Do you think there could be more story to tell here in a second season?

I love this world, I love these characters, I love Nicole’s coats, so I would certainly watch more of The Undoing. And the novel does cover Grace rebuilding her life. But is there a story that you are personally interested in exploring beyond this? Those ideas and themes that drew you to the show in the first place, are those there for you or do you feel like the story’s been told?

Honestly, I don’t have any ideas. It’s not like I’m thinking, “This is what the story should be.” And by the way, I’m not the one to ask. The person to ask about that is David Kelley. I certainly have not had any conversation with David about it, and we’ve had plenty of other conversations, so. But I mean, it would be great!