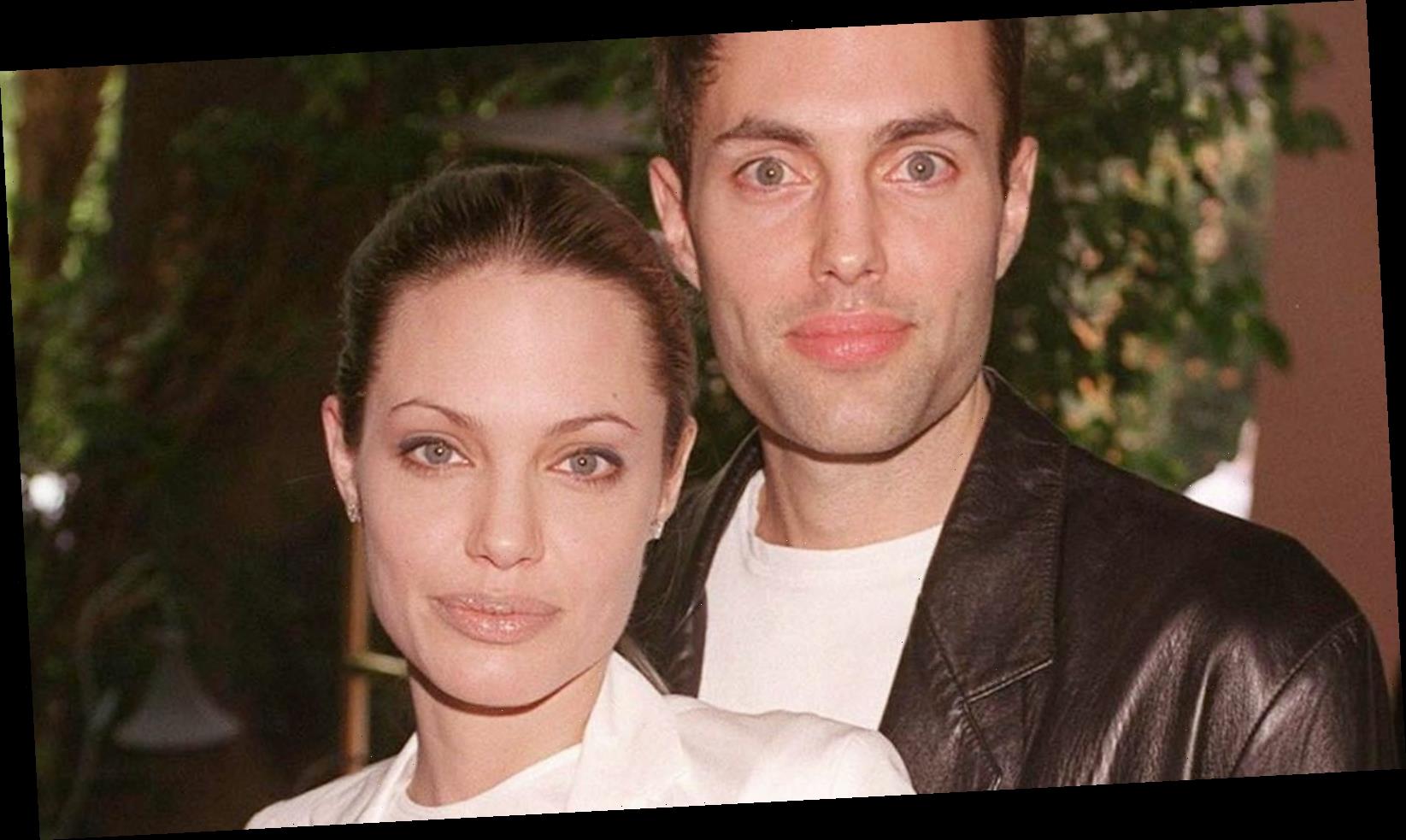 Angelina Jolie is no stranger to making headlines. From her stance on monogamy to her split from Brad Pitt and beyond, the Oscar-winning actor has the ability to get people talking — and it’s not always about her impressive acting. But despite all of the chatter the mom of six has sparked over the years, few moments have made as many tongues wag as when she planted a kiss on brother James Haven Voight’s lips in 2000.

Born to Marcheline Bertrand and Jon Voight, the siblings (who are just two years apart) became inseparable at a young age when their parents split after just five years of marriage in 1976. Recalling the tumultuous childhood that pushed him and his sister to form an unbreakable bond, Haven told Daily Mail how Voight “never did his job as a father,” leading to “horrible memories of my father and the way he behaved.” According to Haven, their dad was “so tough” on their mom that he and Jolie not only put on a united front for themselves, but they also became “very protective” of their mother.

This strong connection continued for decades and yet, something appears to be different about the way that Haven and Jolie interact nowadays. This is the truth about Angelina Jolie’s relationship with her brother today.

Angelina Jolie and James Haven were each other's biggest fans

Speaking with Daily Mail in 2007, James Haven revealed just how difficult his father was, recalling that “alimony was always an issue” and that, when he was 13 and Angelina Jolie was 11, they were tasked with confronting him about money. “There were times when our dad was awesomely good with us, but my biggest and most abiding memory is that he would look more to our faults than to our strengths,” Haven shared.

So when they lost their mother, Marcheline Bertrand, to cancer in 2007, their bond only strengthened. “I couldn’t stop crying,” Haven recalled. “Fortunately, I was with Angie when we heard.” Noting that “Angelina and I are orphans too, in a way,” he explained, “When you see those kids in orphanages, they cling to each other. And that’s exactly what they have — they have each other.” Proudly adding that Jolie has “always been very protective of me with regards to my romantic life, which I love,” he revealed, “I go to Angie for advice and won’t do anything without her because we were so close as children.”

Haven and Jolie became so close in fact that the actor tattooed the letter ‘H’ on her wrist in honor of her brother and when she married Brad Pitt in 2014, she and Haven shared a sweet secret: a tribute to their mom. “I also wore a little flower ring that was hers, and Jamie wore an angel pin from her jewelry box,” Jolie told People.

Angelina Jolie's brother encouraged her to reconcile with their father

Angelina Jolie and her father have a complicated relationship, and, in 2002, she appeared to cut ties with him completely. Speaking candidly with Access Hollywood (via E!), she declared, “I have determined that it is not healthy for me to be around my father.” While she underscored that she didn’t “want to make public the reasons for my bad relationship with my father,” Jolie added, “I will only say that like every child, [James] and I would have loved to have had a warm and loving relationship with our dad.”

In 2007, James Haven told Daily Mail that he too had pulled away from their dad, saying, “At some point I’ve got to be able to let my bitterness and anger towards him go and I’m working on that now.” Everything changed in 2009 when Haven became a born-again Christian. As he rebuilt his relationship with his famous father, he encouraged his sister to do the same. According to E!, she resisted initially, but with a push from Haven and then-husband Brad Pitt (who thought Jolie’s dad “deserved a second chance”), she eventually forgave him. The pair’s “frosty relationship [had] thawed considerably” by 2010, and that February, E! spotted Jolie, Pitt, and their six kids sightseeing in Venice with none other than Jon Voight. As one source told the outlet, “The visit actually went really well, and Angie’s thrilled he got on really well with all her kids … forgiving Jon is a huge step.”

It was the year 2000 and a 24-year-old Angelina Jolie had just won the Best Supporting Actress Oscar for Girl, Interrupted when she made a surprising declaration of love on-stage, proclaiming, “I am so in love with my brother” and gushing, “You are the strongest, most amazing man I’ve ever known, and I love you.” Then, the siblings shared a kiss on the lips at the Vanity Fair Oscars afterparty and sparked a media frenzy. But while many found the embrace strange, Jolie explained backstage (via New York Post) that it simply proved their unbreakable bond. “He and I were each other’s everything, always, and we’ve been best friends,” she said. James Haven later addressed the controversy in 2007, telling Daily Mail, “I did not give Angie a French kiss […] I congratulated her on the Oscar win and gave her a quick kiss on the lips.”

Meanwhile, family friend Cis Rundle told R Online in 2014 that there was an even sweeter meaning behind the smooch. “The day [Angelina] kissed Jamie at the Oscars, it was the first day [their mother] Marcheline was treated for cancer,” she explained. “They left the hospital together and got ready together. Nobody in the world knew that they spent the day in the hospital. It was like, ‘Look where we’re at now.’ But the world saw something incestual,” she continued, underlining that “it was meant to be ‘Here we are.’ They only ever had each other.”

After Angelina Jolie filed for divorce from Brad Pitt in 2016 (a choice she later told Vogue India was “the right decision” made “for the well-being of my family”), her brother quickly swooped in to offer support. Accustomed to being there for each other during life’s darkest moments, the siblings’ strong bond was showcased when James Haven Voight moved into his sister’s rented Malibu home to help look after her children.

As a source told Us Weekly in October 2016, he became their full-time manny and “took on a more active daily role in June.” A move Pitt approved of, according to the insider who noted that “Brad thinks highly of James. He’s always been incredible to the kids and is welcome in his home.” Reporting on Haven’s apparent duties, Grazia noted (via Yahoo! Lifestyle) that “it was his job to be there if any of the kids woke up during the night and to deal with the [other] nannies if they had any issues. He was virtually running the household.”

Haven’s strong bond with his nieces and nephews was nothing new, according to Daily Mail, which previously spotted him taking the kids on outings to the park, traveling with them and Jolie, and more. As one source told Daily Mail, “James helped raise her kids and he would babysit whenever Angie and Brad wanted private time. It’s fair to say he was one of just a handful of people they felt comfortable looking after them.”

Did Angelina Jolie and her brother drift apart 'with no real explanation'?

It’s unclear at what moment Angelina Jolie’s seemingly unbreakable bond with her brother began to disintegrate, but according to one insider who spoke with Daily Mail in January 2021, the relationship between the siblings had changed drastically. “Angelina and James are widely believed to have drifted apart some years ago,” the source alleged, adding that the pair “used to be inseparable” and that Haven “was very much her go-to companion and was her best friend for so many years as well as a devoted brother.”

So what gives? According to the outlet, it’s unclear what transpired between the siblings who had previously gushed over each other non-stop, “but all of a sudden and with no real explanation, their communication seemed to just stop out of nowhere. He does his thing, she does hers and while they may be cordial from a distance you certainly don’t see or hear of them being together,” the source claimed, concluding, “Obviously only they know what really happened, but it’s sad and the situation doesn’t look like changing any time soon.”

Wait, did Angelina Jolie secretly fire her brother and spark a feud?

While some insiders claim that Angelina Jolie and her brother parted ways “with no real explanation” (via Daily Mail), others believe there’s more to the story. According to R Online, James Haven “loves” his sister’s kids and his job as a manny, but Jolie was “so rude to him” it pushed him away. “Angelina puts James through hell when he can’t keep the kids quiet while she’s trying to work, and has him making her coffees and going out to buy her groceries like he’s some kind of assistant,” an insider claimed, adding, “This isn’t what he signed up for when he agreed to help!”

Another source told Grazia in 2017 (via Yahoo! Lifestyle) that Haven was one of six nannies helping Jolie and that he was “quietly dismissed” after the actor noticed the role was taking a “heavy toll” on him. But according to New Idea, that’s not what happened. Rather, they claim Jolie’s dismissal in 2017 left Haven “devastated” and with “a major ax to grind.” The outlet quotes a source as saying that “James insists Angelina ‘ruined his life’ and says they went from being best friends to enemies overnight.” They allege that “Angelina and James had a huge falling out after she sacked him from being her head nanny and they’ve barely spoken since” and went as far as to claim that Haven was considering testifying against his sister during her custody trial with Brad Pitt.

James Haven disappeared for years and resurfaced in 2021

Following his mysterious falling out with Angelina Jolie, James Haven stepped far away from the spotlight and pretty much disappeared. He wasn’t spotted until January 2021 when Daily Mail reported that he was “hunkering down” with his girlfriend of over a decade, karate instructor Ashley Reign, at her home in Canoga Park during the pandemic. It’s unclear what Haven has been doing for work since the abrupt end of his career as manny (his last film credit, according to IMDb, is a 2014 short called Easy Silence), but as the outlet noted, he’s allegedly entitled to 10 percent of his sister’s earnings thanks to a deal struck by their late mother, Marcheline.

But even if that’s the case, he doesn’t appear to be living the Hollywood lifestyle. According to one eyewitness who described the area Haven now calls home, it’s “a very downtrodden and seedy neighborhood” with “a weird, nasty vibe.” The source alleged there are “homeless people living in the bushes among piles of garbage on the sidewalk and rats running about” and noted that “after dark it is not the kind of neighborhood that you want to be walking around in. It’s an intimidating place.”

Just a week later, Daily Mail spotted him again, this time on a Malibu beach with what the outlet described as a “young mystery blonde” while “having a lot of fun,” according to one onlooker.