There’s a scene in the new Tarantino movie Once Upon a Time In Hollywood that I found so unsettling, so graphic, so potent, I haven't been able to stop thinking about it since I saw the film. It’s the scene where Brad Pitt stands on the roof of a house and fixes a TV antenna without his shirt on (SPOILER ALERT!). Oh, hang on. Are you supposed to do the “spoiler alert” warning before you say what the scene is? Yeah, that would make more sense. Sorry. 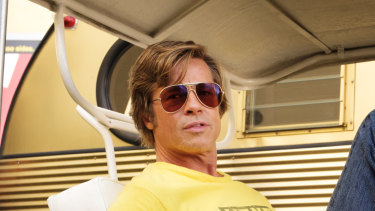 Brad Pitt keeps his T-shirt on for this scene in Quentin Tarantino’s Once Upon a Time in Hollywood.

Don’t worry, I haven’t given anything away, the scene has no bearing on the plot – it’s just three minutes of Brad standing on the roof of a house fixing a TV antenna without his shirt on. And he looks buff and lean and tanned because he’s got no shirt on. And he’s wearing a leather tool-belt, a pair of tight denim jeans and no shirt, which I’ve mentioned already, but it’s an important point that cannot be stressed enough.

While this three-minute scene was happening, I went through three stages of No-Shirted Tool-Belted Brad-Pitt Contemplation. In the first minute I was thinking, “Hey Brad, you be careful up on that roof without your shirt on. You’re in the 50-plus age group now, which is the most at-risk group for roof-related falls that can lead to death, injury or serious skin abrasions, especially seeing you’re not wearing a shirt."

In the second minute, I thought, “You know … Brad actually looks pretty good for a 55-year-old man, standing shirtless on a roof, fixing an antenna, while a gentle Hollywood breeze tousles his brown-blonde sunkissed hair. And he’s the same age as me so maybe I should try the no-shirt look and stand on my roof while the gentle Melbourne breeze tousles my brown-black sunkissed shoulder-hair. Yeah, I should try that. Why not?”

Then in the third, final, unexpected minute, I thought, “Actually … I seem to be enjoying this scene of Brad on a roof fixing a TV antenna without his shirt on a little too much and these feelings of arousal are confusing because I’m a heterosexual cisgendered male who’s sitting in a cinema beside his wife, but now I think I’m starting to understand how sexuality exists on a fluid spectrum and inter-human attractions can no longer be defined in simplistic black-and-white binaries. OK. Scene is over. Can move on. Phew."

But I couldn’t move on, I was rattled and distracted. Sure, I’d had celebrity-man-attractions before – I’d been mesmerised by Ewan McGregor’s devil-eyes, got tingly when Chris Isaak crooned Wicked Game, and I may have watched that GIF of Lenny Kravitz splitting his leather pants about 19 times more than was necessary. But this Brad Pitt thing was something else entirely – and what’s crazy is, I’ve never even found him all that good looking. He always seemed a bit chimpy-faced to me, but now … he’d matured, he’d weathered, he had a more sexy mandrill-ape-look. Or a crested macaque, the hottest of the Old World rainforest primates.

After the film, my wife and I walked out of the cinema and I said, “Good film, hey? And plenty of eye candy for you.” She said, “What do you mean?” I said, “Well, there was that scene with Brad Pitt on the roof, fixing a TV antenna without his shirt on.” And she said, “Oh yeah, he looked great. And you had some eye candy, too. Margot Robbie looked stunning." And I said, “Yeah … Margot … yeah …”

Danny Katz is a Melbourne humorist.