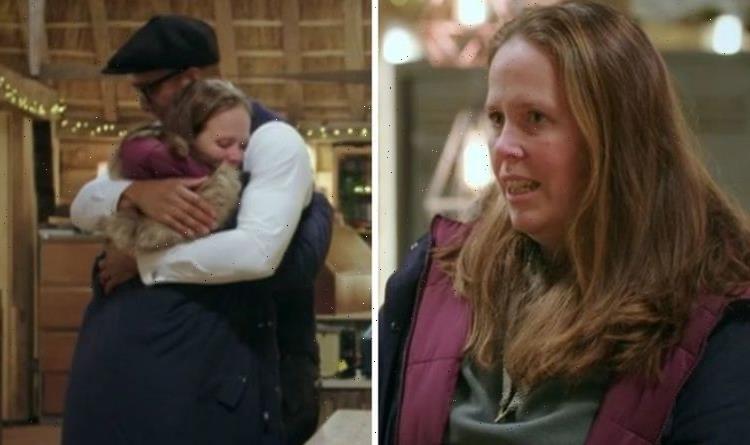 Helen Bannan arrived at The Repair Shop barn hoping a precious item which had been destroyed could be restored. She explained to Jay Blades she was a former kickboxing champion who had to give up her passion following an injury. But after a fire destroyed her home, her trophy was broken, and she sadly lost her dogs too. Viewers of the BBC show were left in tears after watching the emotional moment when Jay comforted the guest.

“It’s a trophy!” Helen replied. “It comes in several parts. That’s ​the base and these are his legs, and his boxing gloves.”

“Right,” Jay commented as Helen emptied the pieces from the box.

“You weren’t wrong when you said it comes in several parts!” He added: “Tell us about it, world champion it says, what’s the trophy for?”

“I’m not,” Helen replied, looking emotional. “No, this turned out to be my last fight.

“I slipped two discs in my lower back so I decided that contact sport was probably not something I should do from now on.”

She continued: “Pretty heartbreaking. I was lucky that I had just adopted a dog and she gave me something else to do with my time.”

Explaining what had happened to the trophy, Helen described a tragic event.

“I had a fire last year in my flat and in the smoke-filled room, the firefighter went to put his hand out, but couldn’t see the trophy on the windowsill and knocked it off.

“So I basically lost all my possessions everything was covered in smoke. And my dogs were still in there.”

“Your dogs were inside the flat?” Jay asked. Helen nodded tearfully.

“And did you lose them?” He asked. Helen said yes and began to get upset.

Jay questioned if Helen was okay before adding: “Come here” as *he gave her a hug.

He added: “I’m feeling this one because you gained a lot and then you lost a lot so this trophy means everything to you.”

“I look forward to trying to get this back together,” Kirsten said.

Viewers were left devastated by the story.

Taking to Twitter, one said: “Touching story about the kickboxing World champion, to quitting due to injury, then severe fire damage and loss of the two dogs…can’t wait to see the restoration of the trophy! #TheRepairShop.”

“Every week I sniff and sob. But this week with the poor lady losing her dogs has got me. #therepairshop,” a third penned.

Someone else commented: “That poor woman who lost her dogs in a house fire. I just can’t imagine the pain and grief she’s gone through. #TheRepairShop.”

But Kirsten had managed to fix the statue successfully, and Helen gave her an emotional thank you.

“I can’t believe he’s back in one piece,” she stated. “Exactly like the day I got him.”

“You are quite obviously a fighter,” Kirsten added. “As I was working on this your story really resonated with me so it’s been an honour to restore this for you.”

The Repair Shop airs on Wednesdays at 8pm on BBC One.