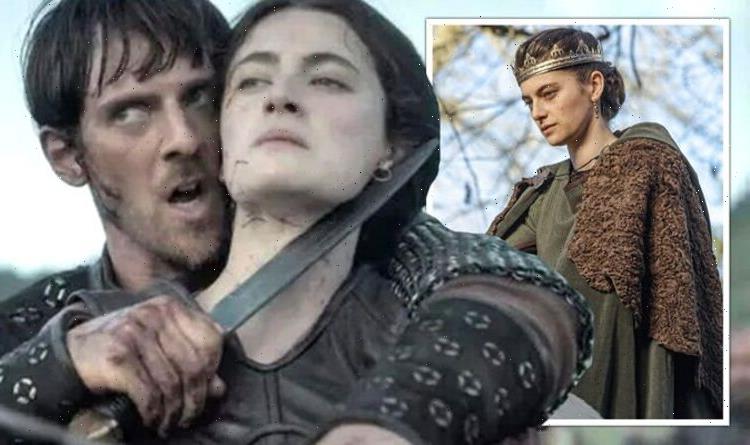 Alexander Dreymon thanks fans as The Last Kingdom wraps

The Last Kingdom’s final season is on Netflix now and it said goodbye to some fan-favourite characters. Aethelflaed (played by Millie Brady) died in a heartbreaking scene as she had breast cancer. The actress opened up about how she coped with learning stunts for the intense battle scenes.

Aethelflaed is one of the many female powerhouses in the Anglo-Saxon drama.

The character is based on the real-life Mercian ruler, who was one of the fiercest fighters in history.

Actress Brady was left in awe of her character after researching how much of an influence Aethelflaed had in the 10th century.

Unfortunately, the TV star, 28, was not as confident with a sword as her character.

She spoke on actress Lauren Lyle’s podcast, She’s a Rec’, about embracing Aethelflaed’s warrior side.

She said: “Actually, not very much is known about her in history.

“So it’s been quite cool being able to have a bit of artistic license with it whilst also digging into the fact this woman was such an absolute ‘G’.

“She was like a proper warrior who was out on the battlefield and was seen to be completely fearless.

“Obviously that’s not true as they wouldn’t be human but yeah, by the stuff we know about her she was pretty cool.”

Lauren asked the actress whether she knew she would be involved in many battle scenes.

Millie said: “I didn’t know to the extent to which. I mean, I blagged it somewhat in the audition.

“Thankfully we do have the most amazing stunt team in Budapest who, when I turned up and was completely inept at any kind of sword fighting, horse riding, all of it, very quickly can make you look like you’re a convincing swordswoman and horserider without having any experience.

“So a lot of it was camera trickery but then I think as time goes on, you spend so much time doing it, I feel like now I know my way around a sword.”

The real Aethelflaed ruled Mercia from 911 until her death.

As the eldest daughter of Alfred the Great, she played a major role in fighting off Viking attacks.

She fought alongside her brother Edward, the future king, to protect their lands.

In the final season of The Last Kingdom, Aethelflaed revealed she was dying.

However, Uhtred ran to her side before it was too late and they shared a final kiss before she died in his arms.

The actress is on Instagram and she shared the trailer for the final season, paying tribute to her co-stars.

She said: “Six years working with the best people. What a ride it’s been.”

The star has since joined the cast of the Apple series, Surface.

The Last Kingdom seasons 1-5 are on Netflix now. Filming has wrapped on the movie Seven Kings Must Die.

Lauren Lyle’s podcast, She’s a Rec’, is available to listen to on Spotify.