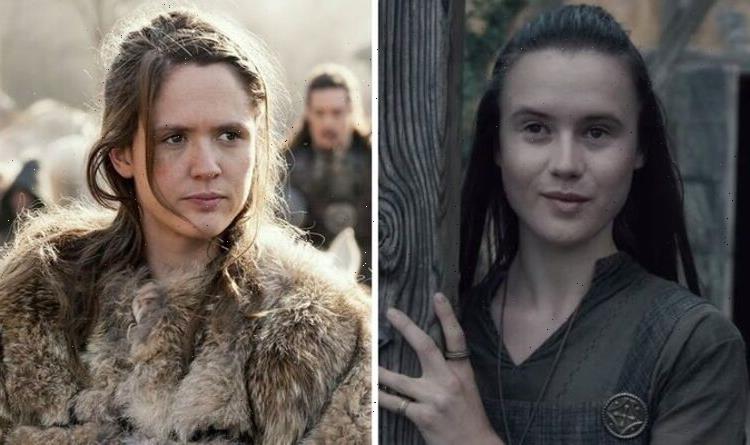 Ruby Hartley has been a key member of The Last Kingdom cast since she joined as a young actress for the show’s fourth season. Set several years after the events of the latest outing, the Netflix star’s role as Stiorra is set to be given a huge upgrade for the upcoming war between the Danes and Saxons.

Star of The Last Kingdom Ruby has opened up about finally making one of her dreams come true on the set of the historical drama’s last season.

The epic Saxon tale will start to wind down with season five releasing next week before the series comes to an epic conclusion with a two-hour follow-up film.

Ahead of the highly anticipated Netflix event, Ruby has recalled some of the highs and lows of her experience filming the final 10 episodes of the series.

Speaking to Netflix in anticipation of season five, she revealed Stiorra will finally get the chance to face off against Brida (Emily Fox).

She revealed: “Fighting with Emily Cox [Brida] has been the highlight for me this season.

“There’s never been two women fighting each other in the show. So that was amazing to get to do that.”

Originally born a Saxon, she is adopted by Danes after her village is raided by a band of Vikings.

She and Uhtred eventually become lovers, but she later leaves him to swear allegiance with Ragnar the Younger (Tobias Santelmann).

Ragnar’s death, and Uhtred’s switch of allegiance to the Anglo-Saxons, has since turned their friendship into a bitter rivalry that will no doubt culminate in the fifth season.

However, before Uhtred and Brida begin their final brawl, Stiorra will, at last, get the chance to duke it out with her father’s sworn enemy on the battlefield.

“But we also just had so much fun,” Ruby recalled of their fight scenes together.

“She was fighting with all the boys. They’ve done it for so long, it’s like second nature to them. Sometimes you’re a bit like, ‘Oh!’”

Embodying the characters for so long has made putting on their Saxon armour and swinging their swords on-set practically second nature for The Last Kingdom’s cast.

Even so, there were still some intense moments during filming when it finally came time for Stiorra to face off against the treacherous Brida.

Ruby continued: “But fighting with Emily, we just had such a laugh and she was also really good. And really scary.”

“And there was not much acting that needed to be involved when it actually came down to it on the day.

“But yes, it was probably one of my favourite things that I’ve done since being out here this year.”

Stiorra and Brida’s fates have yet to be revealed, though fans of The Last Kingdom should certainly brace themselves for plenty of bloodshed in the final season.

Hopefully the upcoming film, Seven Kings Must Die, will also feature comebacks from most of the core cast, but, so far, only Alexander Dreymon’s Uhtred is confirmed to return.

The Last Kingdom season 5 will be released on Wednesday, March 9 on Netflix.