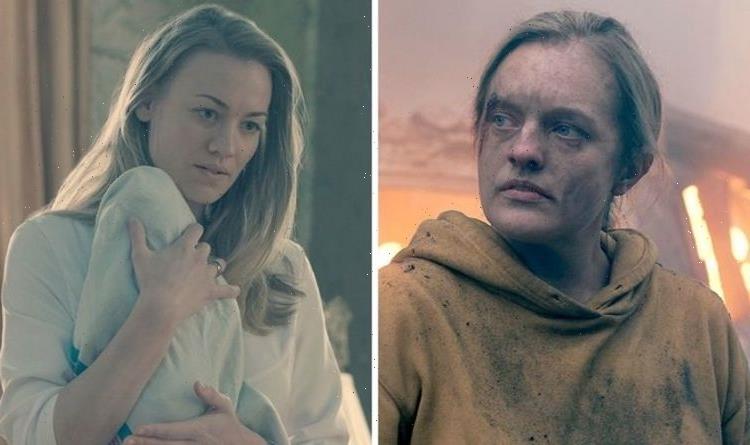 Season four of Hulu’s gripping dystopian drama concluded with June Osborne (played by Elisabeth Moss) and the ex-Handmaid’s finally getting revenge on Fred Waterford (Joseph Fiennes). However, the fight against Gilead still continues, and The Handmaid’s Tale fans have been discussing what could come next when the series returns.

A convincing new theory may have revealed the fate of Serena Joy (Yvonne Strahovski) and her baby in the next season of The Handmaid’s Tale.

Hulu has officially confirmed the acclaimed streaming series will return for a fifth season after the release of the latest outing was delayed by the coronavirus pandemic.

Following the most intense outing yet, which finally saw the death of June’s captor Commander Waterford, June is free from Gilead’s clutches at last.

Although Waterford’s wife Serena is still confined in Canada, many viewers still want her to face more retribution for her crimes against June and the other Handmaids.

Moreover, the birth of Serena’s son in season four could now provide June with the perfect opportunity to take her revenge on the last surviving Waterford.

One fan took to Reddit recently to propose her baby could be taken away from her to be raised by one of June’s allies.

User Strange_Swimming_800 posted: “I hope karma comes for Serena and her son is taken away.

“I need her to feel the pain she happily inflicted on the others in her selfish quest to become a mother.”

In one of the most intense confrontations of the latest season, June told Serena she hoped her pregnancy would fail so she could feel a fraction of the pain June and the other Handmaids felt.

Serena does indeed give birth to a healthy boy, but viewers are convinced it won’t be long before they’re separated.

One option could be for June’s friend Rita Blue (Amanda Brugel) to raise the baby herself.

Rita acted as a Martha for the Waterford household at the height of Gilead’s powers and is slowly getting used to life outside of the oppressive regime.

Looking for a new lease on life in Canada, raising Serena’s baby could be the perfect opportunity for Rita, whose own son died shortly before the rise of Gilead.

The fan continued: “I would love to see Rita raise the baby and then have the Canadians/Americans send Serena back to Gilead.”

They then added: “I don’t care what they do to her once she gets there.”

It seems Serena’s future on the series is sealed for now, as if June wanted her killed in season four she certainly had the power to do so.

However, sending her back to Gilead, or potentially to work in the wasteland known as the Colonies, could satisfy viewers’ lust for revenge against the Waterfords.

Serena could very well become a Handmaid herself if the current regime continues now she doesn’t have her powerful husband to protect her.

Then again, the Commander’s calculating widow may have another scheme at the ready to backstab June yet again and take back control.

The Handmaid’s Tale season 4 is available to stream on Hulu in the USA and airs Sundays on Channel 4 in the UK.