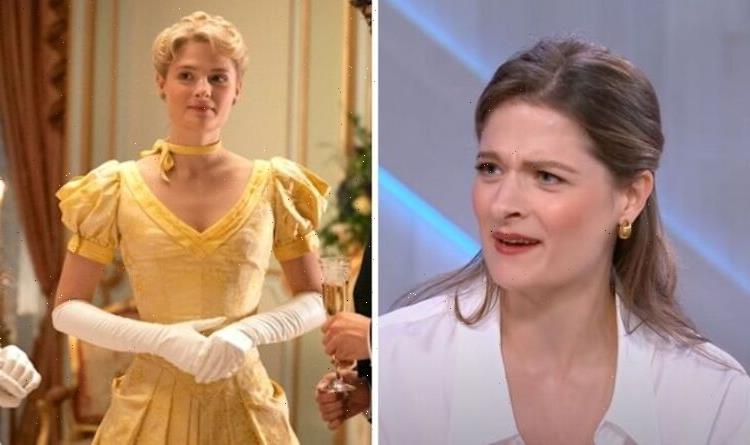 Louise Jacobson plays Marian Brook in the Sky and HBO show The Gilded Age, which is brought to fans by Downton Abbey creator Julian Fellowes. The 30-year-old sat down with Kelly Clarkson and Anne Hathaway on NBC’s The Kelly Clarkson Show to talk about the period drama and how her character is growing into a strong woman.

Stepping up to the challenge of trying to be TV viewers’ favourite period drama, The Gilded Age is airing on UK screens after impressing US audiences.

Marian Brook (played by Louisa Jacobson) is a young woman looking to build her life who is sadly uprooted from the beginning when she moves to New York City after her father’s death.

Now residing with her aunties, Agnes van Rhijn (Christine Baranski) and Ada Brook (Cynthia Nixon), she gets caught up in the battle between old and new money in New York City.

Tom Raikes (Thomas Cocquerel) is Louisa’s late father’s lawyer, and fans and Lousia learnt the hard way that the charming young man is actually a schemer and host Kelly was not a fan of him, in fact, she “hates” him.

As the season progresses, the duo’s sweet love is tarnished as she learns that he is up to no good and has misled her on her family fortune.

The pop singer started the interview by asking: “Why did you trust him?

“I know that these are not real people, they’re not real characters but I was so angry at Tom Raikes, I hate him!”

Referencing a teaser of an episode that Kelly is yet to see, she added: “I’m very excited that now it’s coming out that he is not a good dude.”

Marian’s aunties had tried to warn their niece that Tom wasn’t all she thought he was, but the actress defended her character’s decision to follow her heart.

“Everyone is giving Marian such a hard time for entertaining this guy, but to her credit, she has never been in love before,” the star said.

“He’s from her hometown, she’s not used to this. All he says is he loves her and that he needs her.

Kelly quickly moved on after admitting that she had “explained” the situation well.

The Gilded Age is Lousia’s first regular recurring TV role, and with the pressure to pull it off, she had previously revealed that Disney had impacted her idea of what beauty was.

This caused her to alter her costume after initially having her dresses fitted too tight, so much so that it affected her sleeping as she could not lay on her side.

Later in her interview, she admitted that she “grew” to love her character by the end and that it was the entire project that attracted her first.

The award-winning actress Anne appeared on the show to talk about her new Apple TV show WeCrashed but managed to steal the spotlight for another reason.

The Les Miserables star wowed the studio audience and viewers in a head-to-head singing competition with the Pop Idol winner.

The Gilded Age is available to stream on HBO Max in the USA and Sky Go and NOW in the UK.