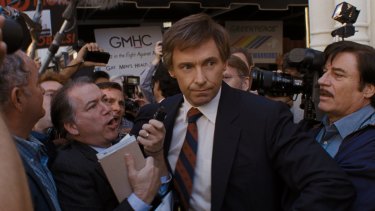 Should politicians be held to account for their marital infidelities?

Clearly, Trump fans don't think so. If anything, they seem to rejoice in the crassness of their man's transgressions. For the rest of us, the answer may depend on the level of hypocrisy involved.

Politicians who trumpet family values can hardly claim immunity when their sexual misadventures catch up with them. Nor can those who compromise national security by exposing themselves to blackmail. And now, in the age of #MeToo, there are other complications, tossed up by the tangled relationship between sex and the abuse of power.

US Democrat Gary Hart was forced to get to grips with these questions in 1988 when his bid for the presidency was derailed by allegations that he was having adulterous sex with Donna Rice, a woman he had met aboard a Florida pleasure cruiser bearing the excruciatingly apt name, Monkey Business.

As the story of his downfall plays out in Jason Reitman's The Front Runner, it marked a crucial turning point in American politics. This was the moment when the media ceased to turn a blind eye to the moral flaws displayed by politicians in their previously private lives.

After Hart, they would be regarded as fair game and political reporters would have to face the fact that they were now in competition with the paparazzi.

The film is adapted from the book All the Truth Is Out: The Week Politics Went Tabloid, by journalist Matt Bai, who collaborated on the screenplay. And it gives a hearing to all of those caught in the chaos. Nonetheless, according to Bai, it's the media who bear the brunt of the blame for the destruction of Hart's career, rather than the candidate himself.

It could be seen as a revisionist line. If you're looking for an alternative view of Hart's character and conduct, you'll find it in the caustic 1987 profile by Vanity Fair's Gail Sheehy, who covered his campaign. But for Bai, it remains a tragedy that Hart lost the chance to prove that his qualities as a reformist leader could transcend what he sees as a single lapse in judgement.

For Reitman, it's the perfect subject and he enhances it with the forensic delight in power games that he exhibited in both of his earlier black comedies, Thank You for Smoking and Up in the Air.

Every base is covered. We're with Hart and his team through all the ducking and weaving that goes on in their efforts to salvage his reputation and we follow the vacillations of the country's most influential journalists as they make up their mind as to where their own moral compass is pointing.

Much of it is set in fuggy offices and bars where reporters and campaign aides drink and gossip together, sharing an equal understanding of the expediencies that help shape political decisions. There are glimpses of the famous. Bob Woodward is in there and a miscast Alfred Molina plays Washington Post editor Ben Bradlee. And at the hub of it all is Hugh Jackman's Hart – a glamorous left-of-centre thinker with a detailed grasp of the policies he's sponsoring and what looks to be the sophistication to see them realised.

To the liberal press, he's the perfect antidote to eight years of Reaganism and it isn't as if his womanising is news. In the past, it almost destroyed his marriage. Yet when one of Rice's former friends tips off the Miami Herald about their romance, journalistic imperatives take over in the knowledge that if the paper doesn't pursue the story, its rivals will.

It's no stretch for Jackman to convey Hart's charm. It's when he's faced with the fall-out from the revelations that his performance really starts to bite. He becomes more self-righteous with every speech yet he doesn't bluster or deny. Jackman's face simply assumes a long-distance stare as he ignores what's in front of him to carry on as if nothing has happened.

It's such a tin-eared response to the mess he's in that it virtually demolishes Bai's argument. If Hart wasn't a canny enough politician to ride out this storm, how was he going to weather the turbulence he was bound to encounter as his country's leader?