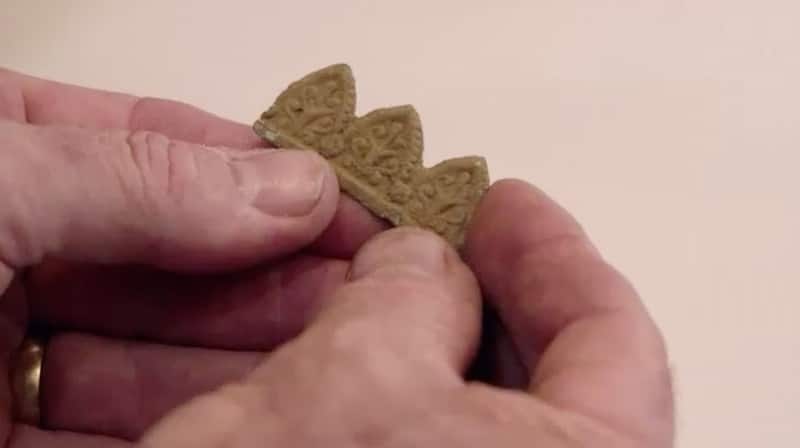 The latest episode of The Curse of Oak Island saw metal-detecting expert Gary Drayton uncover what is believed to be the first evidence of a French presence on Oak Island — a discovery which could completely rewrite the history of the legendary mystery.

The team also uncovered a likely tunnel in the Money Pit, and set up a new research center to house late historian Zena Halpern’s vast cache of documents.

Read our full recap of The Curse of Oak Island Season 6 Episode 5 below!

The episode begins with an aerial camera view showing impressive progress being made in Rick and Marty Lagina’s quest to find treasure on the mysterious island in the North Atlantic.

On the ground, Craig Tester tells Mike Tedford from Choice Drilling that he hopes the new exploratory borehole known as HI4 will uncover a tunnel at the 100 foot level.

Prior seismic survey data revealed possible voids which may be connected to the original Oak Island treasure shaft discovered in 1795. So far, the seismic results have led to revelations of human activity, such as ax cut wood at a depth of 170 feet, and the new borehole has detected a possible network of tunnels.

Geologist Terry Matheson confirms that conventional wisdom dictates that this is the same area where the Money Pit was.

Later Craig meets up with Rick, Charles Barkhouse, and Doug Crowell in the war room for an update on Rick’s trip to New York. Marty Lagina is offsite but conferencing in and asks about Rick’s journey.

It was one week ago that Rick received news of his friend, historian Zena Halpern’s passing, and her bequest of her life’s work to him. According to Zena, the Oak Island mystery has a connection to the famed Knights Templar dating back to the to 12th century, predating Christopher Columbus’s voyage to the New World.

Rick relays that retrieving Zena’s copious amounts of material was a stunning experience. Discovering the relevance of her immense cache of documents and books to the island will take time and careful drilling down. 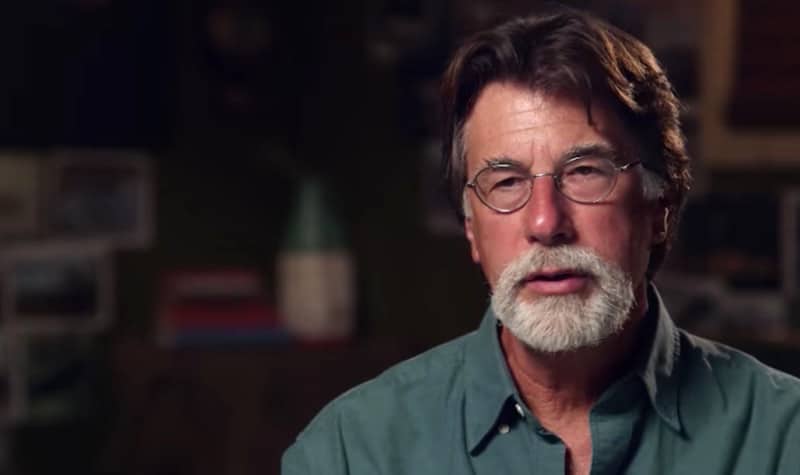 In particular, her copy of the Cremona Document is intriguing. It is a collection of maps and writings allegedly assembled by a 12th century Templar Knight that includes tales of finding the Ark of the Covenant and a 1178 Templar voyage to the New World.

Is the document accurate? Rick cannot say. But he believes that it is worth researching its veracity, and proposes establishing a research center to showcase Zena’s collection. Marty agrees. The research center will be an endeavor to literally separate fact from fiction.

Back at HI4, where earth is extracted at roughly 10 feet intervals and examined by hand for treasure and artifacts, Charles and Craig return for an update on the hoped-for 100 foot tunnel.

They discover that the drill bit has coughed up a piece of wood which looks to be cut at a 45 degree-ish angle. Charles remarks that this means the team is right on target, and the series narrator states that the condition and location of the wood likely means it is from a man-made, centuries old structure.

Is it evidence of one of the flood tunnels or a tunnel that leads to fabled treasure? If so, the finding is incredibly significant because finding the elusive Shaft 6 could help pinpoint the original location of the Money Pit.

Rick joins the crew and is told that this exciting discovery could be from a tunnel leading to the Money Pit. Prior work by another treasure-hunting team in the area known as Shaft 6 was thought to have located the Money Pit, but speculation holds that the area was flooded, and a debris field created, before anything conclusive could be found.

Unfortunately the next drill bit haul, at 128 feet, pulls up a clump of sinewy strands, material the team concludes is from the floor of a tunnel. They see little purpose in continuing to drill here. It’s time to choose another site in hopes of discovering the Money Pit.

The next day the much talked-about research center arrives. It is a handsome, gray-blue, pre-built building that is on loan from an Irving Equipment Limited subsidiary, Kent Homes Limited. It is the new home of Zena’s life’s work.

Meanwhile Jack Begley, Peter Fornetti, and Gary Drayton head to Lot 21 where three weeks ago Gary and Rick made a startling discovery, a bobby dazzler of the first order, a gold-plated brooch. The find was later determined to date back as many as 700 years. Will they find something equally amazing today?

Gary’s detector emits a series of beeps and buzzes, but he’s picky. When he finally sinks his trowel deep into a moist spot in the earth what he pulls up causes Jack to exclaim, “What is that?!”

Gary says the small rectangular object embellished with a fleur de lis design reminds him of a military cap badge and declares it a top pocket find! With a flourish he unzips a top pocket and tucks the potential treasure inside. 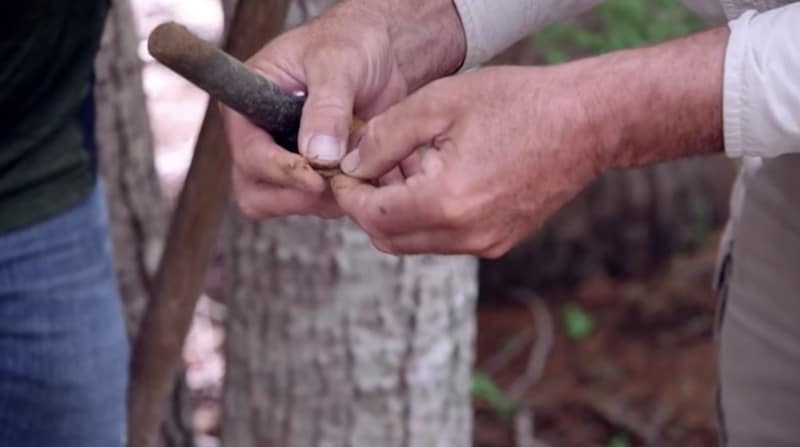 Before long Gary again uncovers a similar metal bit with the same design and discovers that the two pieces fit together. Could this find date to the 1700s, and possibly be from the cap of a French military officer? Gary thinks so, but the more intriguing question is, does this discovery have a connection to the gold brooch discovered in the same area earlier this year?

Later that same day, Rick, Charles, Craig, and Dave Blankenship pull up to the location of the new borehole, named IJ5.5.

It is close to GAL1, a promising shaft where, at 160 feet, a large spike, a gold-plated 18th century British military button, and an iron hinge possibly from a large box or treasure chest, were found. A somewhat impatient Rick says he’s tired of  the guessing game. At this spot he wants to uncover a tunnel between Shaft 6 and the Money Pit!

The next day the team check on the progress of the steel coffer dam at Smith’s Cove. Rick asks if there are any problems and a member of Irving Equipment Limited assures him there are none to date. Rick is told that at the end of the day a third of the wall will have been completed. Rick is pleased. He can’t wait for the dam’s completion so that he can get his hands dirty!

The coffer dam is constructed of sheet piling in a process in which a hydraulic hammer drives 45 foot steel sheets down to a depth of 25 feet into the sea bed. When finished, the sheets will form an airtight barrier allowing for drainage of a 12,000 square foot area. What ancient treasure may lay there, waiting to be found? 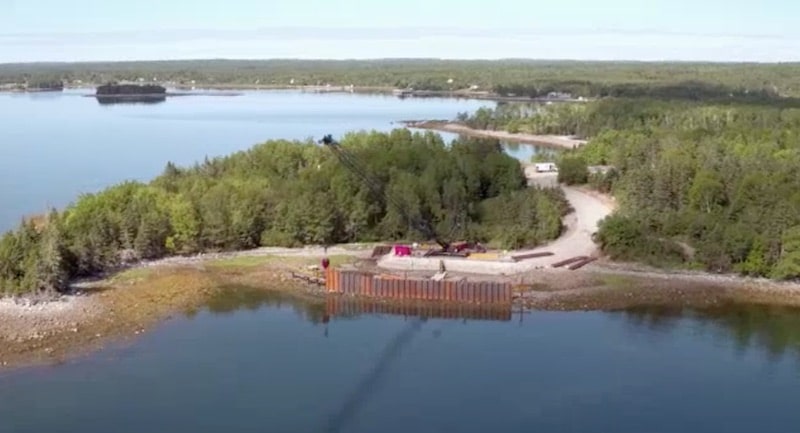 Later that day the research center is where the action is as the team gather to look at Gary’s top-pocket finds, or “TPF’s,” according to Marty.

“Check this out,” Gary tells archaeologist Laird Niven, handing him the two pieces with the fleur de lis design.

Could these be connected to a centuries old ship’s log which detailed a failed French expedition in 1746? The log was found last year by one of the team members, and may describe a journey made by the descendant of a family with Knights Templar connections. Amazingly, the log documented construction of a deep treasure shaft dug on a wooded island. Could it be Oak Island that was described in the mysterious log?

Back in the war room, Marty and Rick are on the phone with author Randall Sullivan. He has written about and visited Oak Island in the past. Can they provide him with new information for the book he’s currently writing about the island?

The brothers are amenable, and tell Randall that they are not sure where last summer’s finds, including human bones and the medieval cross, will lead them this year. They are puzzling to Marty, who doesn’t see a connection between them unless something, “rather extraordinary happened here.”

He asks Randall if his theory about Francis Bacon having a connection to the island is still his primary lead. A cagey Randall replies that he has no new information but doesn’t elaborate. Has the author discovered an epic, jaw-dropping revelation about Oak Island?

Time will tell. Marty says simply that Randall is, “an aficionado,” and that he hopes his book does the island justice.

Later that day the team heads back to IJ5.5 and discover that the drill has uncovered, at a depth of 111 feet, a whole piece of wood, not splinters, not slivers. There are oohs and ahhs as the team gazes upon the muddy chunk. It is declared a potentially significant find and Craig believes it’s a horizontal piece; possibly they’ve hit a bit of a tunnel from Shaft 6.

Rick declares that today is a good day on Oak Island saying he believes, “we’re on a tunnel,” adding, if they find the tunnel, they find the Money Pit!

The day concludes on an emotional note as Zena’s son Davin Halpern arrives at the research center with a gift for Rick. He unwraps a towering candlestick, a treasure that Zena held dear. Rick is humbled and teary, saying he has reconnected with his old friend, and that a piece of her is now here, adding, “the candle will be lit when we have the answers.”

Will the answers the team is searching for, and Zena’s candle be lit, next week? Be sure to tune in and find out!

The Curse of Oak Island airs Tuesday nights at 9/8c.