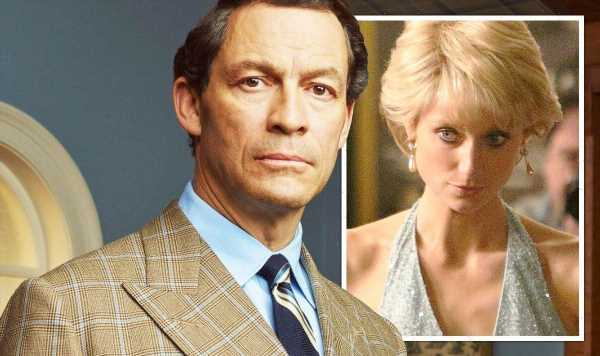 The fifth season of The Crown will feature main cast member Dominic West’s son Senan as Prince William, the first son of the late Lady Diana, Princess of Wales (played by Elizabeth Debicki). All eyes will be on how the Netflix drama will depict some of the most tragic moments for the Royal Family this time around, including Diana’s death, and Dominic recently admitted some scenes proved a little too much for his son to be willing to return.

Dominic has confirmed his son Senan won’t reprise his role as Prince William in season six after finding this year’s outing of The Crown too emotional.

His 13-year-old second child with his wife Catherine FitzGerald will act opposite his own father during some huge moments for the royals.

The upcoming instalment hits screens this week, and its biggest talking point has been how the series will handle the tragic death of Diana in 1997.

Diana’s sons William and Harry were just 15 and 12, respectively, when their mother was killed in a traffic collision along with her partner Dodi Fayed and chauffeur Henri Paul.

Dominic admitted having his own son cast in the role added enormous pressure on his own performance, and the family co-stars struggled through some of their hard-hitting scenes together.

“I loved watching him do it,” he began. “We have a natural physical bond.

“So that was wonderful but when it gets very emotional, it can get a bit weird.”

Of course, Senan’s scenes come as Diana and Charles divorce and before her tragic death – no small feat for a first-time actor.

“When he had to cry, it was horrible,” Dominic admitted to RadioTimes.

Senan found filming so emotional, in fact, he has since decided to opt-out from returning as William when showrunner Peter Morgan and the cast begin work on The Crown season six.

“He actually decided not to do it for the next series,” the Prince Charles star confirmed.

“Especially after some of the more emotional scenes that we did this season around Diana’s death.”

Despite his challenging screen debut, Senan was offered some invaluable experience working alongside some of the UK’s most cherished screen legends.

“[Imelda is] one of the best actresses in the world and a huge hero of mine,” Dominic continued.

“I said to Senan, ‘Do you know how lucky you are to be acting with this amazing actress?’ and she was very kind to him.”

Dominic also recalled an on-set mishap in which Senan couldn’t help stuffing his face with chocolate eclairs before he was informed about continuity.

Before he realised each scene had to be filmed at least 20 times, Senan had helped himself to a whole eclair for almost each take of one particular sequence.

Hopefully, after the demanding experience of working on The Crown, Dominic’s son Senan will be able to land another TV or film project with a little less pressure riding on his performance.

The Crown season 5 will be released Wednesday, November 9 on Netflix.