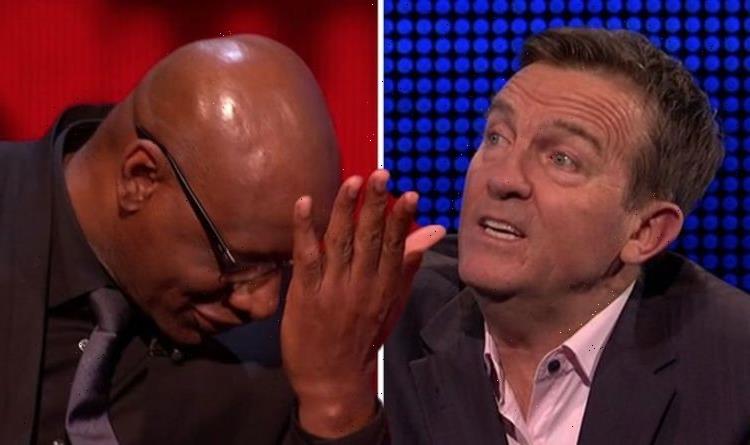 The Chase: Bradley and Shaun comically tease each other

Bradley Walsh was joined by Chaser Shaun ‘The Dark Destroyer’ Wallace on Tuesday’s repeat of The Chase. The ITV presenter welcomed Rebekah, Rhom, Kath and Mark onto the show as the four contestants battled it out for a chance to win the jackpot. However, Bradley was ordered to “move on” by Shaun after he called the presenter a “clown”.

Rebekah was the first contestant to face the Chaser after earning £5,000 in her cash builder round.

During their head-to-head round, Bradley asked: “What group of entertainers attend the annual Grimaldi church service in East London?”

The options were clown, jugglers and trapeze artists with Rebekah opting for the latter.

“Indeed,” Bradley quipped. “The greatest clown that ever lived apart from…”

“Yourself,” Shaun interrupted and the host continued: “No, Charlie Cairoli, sensational.”

“And yourself,” the Chaser swiped as Bradley remarked: “I wouldn’t really call myself a clown.”

“I would,” Shaun jibed, leaving Bradley speechless. “Next question.”

Bradley asked: “The Battle of Bannockburn was fought as part of an attempt to relieve the siege of what castle?”

“I should know this living in Scotland, it’s definitely not Glamis Castle,” she remarked.

He commented: “June 1314 I’m just trying to remember the day it took place.”

“Thursday,” Bradley joked and Shaun added: “No, the actual date. Was it June…”

Interrupting, the host suggested June 12 before offering up the first and second of the month as possibilities.

“Let’s move on,” the Chaser urged but Bradley continued listing off dates in June.

“Why did I start this?” Shaun asked and the presenter said: “Tell us when I’ve got all day.”

“No we haven’t got all day because the news is starting at six so let’s crack on,” the Chaser warned.

Rebekah was subsequently beaten by the Chaser and Rhom suffered the same fate after choosing to play for £33,000.

Kath was the first contestant to make it through to the final with £4,000 but Mark failed to join her after opting for his higher offer of £66,000.

The Dark Destroyer swiftly defeated Kath in the final chase but applauded her bravery for playing the round on her own.

The Chase airs on ITV on weekdays at 5pm.