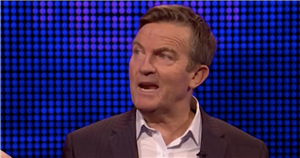 Gemma, Lucy, Eoin, Ramji joined 61 year old Bradley in the studio to attempt to outsmart one of the franchise’s gaming experts.

However despite tough questions, it wasn’t the groups understanding of topics that caught the attention of viewers watching as her cheerful demeanour got tongues wagging online.

The 40-year old former air-hostess went up against barrister and lecturer Shaun Wallace – named The Dark Destroyer – on the popular Quiz programme as she was seeking funds to set up her own silversmith workshop.

And Lucy appeared to be a longtime fan of the programme and was clearly enjoying the experience of appearing alongside Bradley Walsh to try and beat the Chaser.

However this was much to the chagrin of some disgruntled viewers online who took to social media to express their thoughts.

One viewer took to twitter writing: “No one is that happy #TheChase” – @Queen_Vix88

Whilst Lois Prior couldn’t help but notice: “Lucy is very happy isn’t she #TheChase

However, despite a few negative comments, the former hairdresser appeared popular with many viewers watching Monday’s edition of the programme.

One viewer named CJ was raving so much about the contestant on social media, he wanted to donate to a GoFundMe Page to get her own show writing: “Enchanting is the right word im absolutely obsessed with Lucy on #TheChase she just seems so full of positivity wheres the gofundme for her studio I’d donate” – @PopplioPup

Although Lucy revealed on the programme that she wanted to win the money to set up her own workshop, viewers had other ideas with one suggesting she should use her cheerful nature to go into politics writing: “With Lucy's positivity she ought to be running the country!..#TheChase” – @Basweld1

However it was not to be, as despite her enthusiasm to win money for her two kids, Emily and Poppy, Lucy was cut short of winning the higher £40,000.

The studio erupted in giggles after the contestant got her first question wrong as the 40 year old slightly changed her demeanour and declared she was “going to get serious now!”.

But it wasn’t to be for the Isle of Wight native, who was the second contestant to loose out to The Dark Destroyer.

However even quizmaster Bradley Walsh couldn’t help but comment on her cheery demeanour as he likened her to the famous Disney Character, Peter Pan, who is known for his childlike behaviour.

Bradley exclaimed: “I’m enchanted by you and I think you’ve been a great contestant”

After Lucy left the set, Bradley turned to the chaser on duty where he remarked: “You know what she would make on film? A great Peter Pan!”.

Even the chaser for that episode himself, was left in small fits of giggles by Bradley's cheeky remarks and Lucy's jovial attitude on the set.

The Chase airs at 5pm on ITV