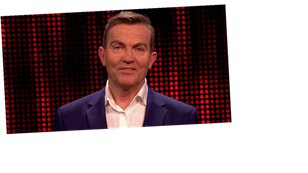 The Chase viewers were left fuming on Tuesday afternoon as ITV aired a throwback edition of the popular quiz show.

Marcia as the third contestant to try her luck against Shaun Wallace aka the Dark Destroyer in a round of general knowledge questions.

The contestant felt the pressure and decided to take the low offer of -£3,000 from the quiz champion and subsequently brought the total down from £25,000 to £22,000.

Marcia told presenter Bradley Walsh that it would "help the team" for her to come back.

She previously told teammate Kat that she should take the high offer of £20,000, leaving those at home even more furious at her decision.

Taking to Twitter, one fan penned: "Tells everyone else to go high then takes a minus offer?? Boooo."

Another added: "Tells previous contestant to go for big offer, then takes the minus offer herself. There is no literally no shame in some people."

While a fourth viewer chimed: "Taking the minus offer on #thechase is a disgrace, no two ways about it. Cowards move."

"I judge people so hard when they go for the minus offer, hope she gets caught, a fifth social media user ranted.

Marcia managed to sail through to the final round and £3,000 was removed from the £25,00 previously won by fellow contestants Daniel and Kat.

Contestant Kat was the second player to take on the Dark Destroyer and opted to go for the highest amount offered.

This meant that she was the most at risk of being "caught" but her companions reassured her that she would be fine.

Marcia took the lowest offer available and returned to her team as the next player took his turn.

Geoff accepted an offer of £7,000, saying pointedly: "I can't take the minus, I couldn't live with myself."

Things didn't go to plan for Geoff and he unfortunately got caught by Shaun in the head-to-head round.

Marcia, Daniel and Kat scored 14 points in the final chase, however it wasn't enough to beat The Chaser.

It was just another day in the office for the Dark Destroyer as he managed to catch the team with 40 seconds remaining on the clock.

The three players all left the studio empty-handed after the defeat.

The Chase airs weekdays on ITV at 5pm