Bradley Walsh welcomed contestants Paula, Natasha, Martin and Jamie onto this week’s first instalment of The Chase as they looked to make it through to the Final Chase. The team got off to a good start with the first two players storming through their head-to-head with Chaser Shaun ‘The Dark Destroyer’ Wallace. Player three, Natasha, managed to do the same but after having already mocked Bradley Walsh’s joke, she was blasted by the host after a mishap on set, with him saying: “You take the mickey out of me and then you’re breaking my table!”

Players Jamie and Martin sailed through to the Final Chase this evening against Shaun.

After having already failed to catch two players, Shaun warned Paula and Natasha the show would be a “game of two halves.”

But luckily for Natasha, she also managed to make it into the Final Chase with £5,000.

However,  Bradley was left unimpressed after the player had previously mocked his joke for being a “dad joke.” 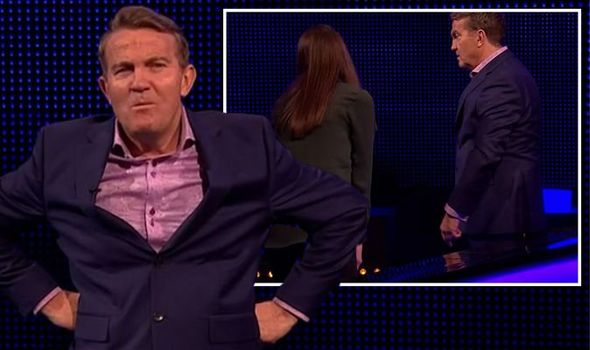 We will use your email address only for sending you newsletters. Please see our Privacy Notice for details of your data protection rights. Anne Hegerty addresses new role away from ITV show amid shake-up

Things went from bad to worse when Bradley told her she had broken the table whilst up at the podium.

He hit back: “You take the mickey out of me and then you’re breaking my table!

“There you go, you’re in the Final Chase,” he added, pointing at her to go back and join her team.

After she had sat back down, he joked: “Don’t darken my door again.”