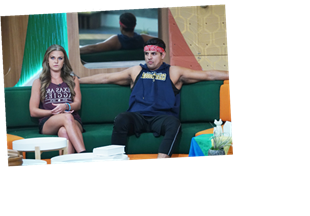 In July 2020, Haleigh Broucher of Big Brother 20 fame announced she and The Challenge star Fessy Shafaat decided to part ways after nearly two years of dating. A month later, he competed on season 36, Double Agents, and became interested in Tori Deal. Following the season, she broke up with fiance Jordan Wiseley, and many fans claimed they saw her and Fessy vacationing together, fueling dating rumors.

When the season started airing, a Jan. 2021 segment seemingly highlighted a romantic connection between Fessy and Tori. While Tori spoke out and insisted she didn’t cheat with him, Haleigh also told her side of the story, explaining she planned a life for her and Fessy after the season.

In the summer of 2018, Haleigh Broucher and Faysal, or Fessy Shafaat met while competing on Big Brother 20. The two pursued their romantic relationship more in the jury house and continued dating after the show.

Although the couple visited each other during the holidays and went on several vacations together, they had a long-distance relationship as he lived in Florida and she finished school in Texas.

Two years after they started dating, in July 2020, Haleigh announced she and Fessy amicably parted ways on her Instagram Story and Twitter.

She explained the two tried to make it work but “the distance, the different backgrounds, and the constant pressures online” ultimately broke them up. Fessy has yet to comment on the split.

Tori Deal and Fessy allegedly began romantically seeing each other

A month after the breakup announcement, Fessy flew out to Iceland to film The Challenge 36: Double Agents. He noted he shared a “genuine connection” with co-star Tori Deal during the season and admitted he found her attractive.

However, she claims nothing romantic happened between the two while they were in the house as she had a fiance, multi-champ Jordan Wiseley, at the time.

A few weeks after filming wrapped, Tori and Jordan announced they ended their engagement. Shortly later, many fans claimed she and Fessy vacationed together in Turks and Caicos as they thought they heard her in the background of his Instagram Live and someone shared pictures of them at a bar together.

The two have not addressed the current status of their relationship or the rumored vacation yet.

Haleigh claims Fessy left her while filming ‘The Challenge 36’

In an unlocked note on her Patreon account, Haleigh spoke out about their relationship after a Challenge clip highlighting a seemingly romantic connection between Tori and Fessy aired.

She claims they were in a relationship until the end of October, when she received a phone call that ended it. The BB star clarified she didn’t date or “entertain” anyone else as he filmed the show but planned to move into a spot to accommodate them both.

Haleigh also explained she prepared to pick him up from the airport following filming so they could “start our real life.” Additionally, the Texas native claimed they agreed to fix their relationship after he returned home.

According to Haleigh, she didn’t expect the breakup as he reportedly called her every week while filming. Fessy has not commented on her side of the story and has since put his social media accounts on private. The Challenge 36 airs Wednesdays at 8/7 Central on MTV.