The 2019 animated reboot of “The Addams Family” had a tough hill to climb, tasked with appealing to both fans of the classic television series and the popular 1990s live-action movies, but directors Greg Tiernan and Conrad Vernon — the duo behind the raunchy “Sausage Party” — were able to make something darling. The duo’s followup, the unimaginatively titled “The Addams Family 2,” doesn’t continue that trend and, in many regards, shows that there’s (finally) no gas left in the tank when it comes to these beloved characters.

Newly integrated into the world of the average American citizen, when the film opens, the Addams clan seems to be on stable footing, but discontent still lurks, as young Wednesday (voiced by Chloe Grace Moretz) feels adrift from her family. Family patriarch Gomez (voiced by Oscar Isaac), determined to show his daughter how much he loves and supports her, decides to take the gang on a family road trip. Inevitably, the road trip comes with its own issues, especially once Gomez and Morticia (voiced by Charlize Theron) are told Wednesday might not be their daughter after all.

The last animated “Addams Family” venture worked as both an origin story and a contained tale about choosing to live as the type of (appropriately kooky) family that suits your clan best. That sense of structure and inherent spirit is lacking right away, with Wednesday soon using her Uncle Fester (voiced by Nick Kroll) as a subject for a science fair project. She wants to take out his negative qualities and swap them with the more intelligent qualities of her squid pal, Socrates. The experiment doesn’t win her a prize — the joke is “just trying is the same as winning,” which seems a bit mean-spirited right off the bat — but this off-kilter bit does introduce her to a man named Cyrus Strange (voiced by Bill Hader).

Maybe because the Addams family have come to personify all that is strange and unusual, it’s hard to see Wednesday’s affect any differently. She talks about being distanced from her family, but there’s no evidence of it before or leading up to the central conflict, so it leaves the plot clunking and stopping from point-to-point. The road trip and the concerns that Wednesday was possibly switched at birth never feel like organic progressions so much as two different storylines mushed together to fill out the narrative.

That’s made all the more irritating by the fact that there are interesting elements that could yield from either plotline. Audiences didn’t get to see much of Gomez being a tenderhearted father in the last film and this new outing happily corrects that; it is very much his movie. Isaac gets an opportunity to have fun, throwing out different accents (including a hilarious Southern twang) but, more importantly, we see the devoted father he is. The thought of Wednesday entering the awkward teenager phase breaks his heart, but instead of giving her space, he doubles down on smothering her with affection. 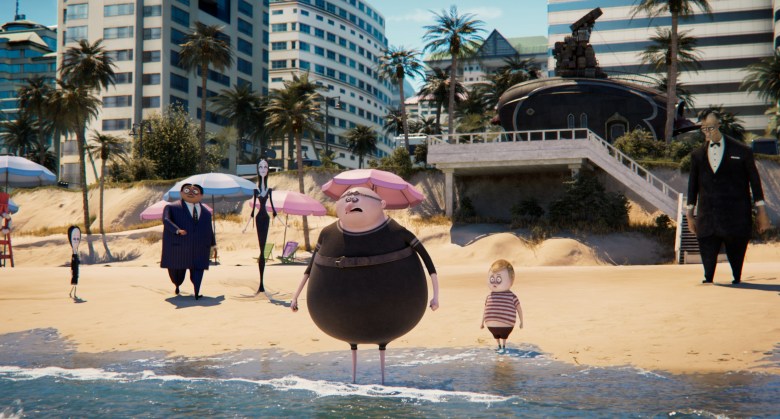 But the road trip element of the narrative is little more than an opportunity to plunk the mysterious and spooky Addams clan in different locations. Oddly enough, there’s no sense of mocking or, really, any humor derived from the various locations the group goes to. Whereas the previous features, even the animated one, delighted in seeing the Addams react to people who are different from them, there’s absolutely nothing like that here, with the exception of a running gag about a couple trying to get engaged.

The switched at birth storyline is just as ill-defined, mostly because there never even seems to be a possibility that it will be true. Uncle Fester talks about being involved in the situation, but even in the flashback, there’s never a doubt that Wednesday is an Addams. It’s a red herring through and through, and when the narrative unwinds to its conclusion, it’s all held together by process of elimination.

Because Cyrus is the only outsider the Addams meet, it’s obvious he’ll be involved somehow, yet his entire subplot is only wrapped up within the last 15 minutes of the feature. Even Gomez’s sadness at possibly losing his daughter is rushed through, one of many moments in the film where anything passing for sentimentality is immediately (and jarringly) followed by loud noises or rap music. It’s almost as if the film’s creative team is afraid of losing the audience to any moments that make the characters feel human, as opposed to weirdos who simply enjoy fart-based humor.

That’s a step back, as one of the biggest surprises of the first animated film was in Tiernan and Vernon’s ability to bring some of their more adult-centric humor to a decidedly family-friendly film. Much of that is tamped down here, mostly in favor of toilet humor and at least one sequence that sees Uncle Fester juggling, only to fall down the stairs screaming, “My balls!” Other moments poke fun at horror conventions, including a mind-reading segment that shows off just how smart and fun this all could be.

Not that there isn’t time to amp up the smarts and laughs: The movie barely clocks in at feature length, with the final 10-15 comprised of a music performance by Snoop Dogg, who also plays Cousin Itt, and animated credits showing the Addams on a trip around the world. Why was that adventure not the focus of this movie? A missed opportunity through and through, “The Addams Family 2” is a giant step backward for a franchise that already had its work cut out for it and mostly succeeded the first time around. If this is what the Addams family are up to these days, audiences likely won’t feel compelled to go along on the next altogether ooky outing.

A United Artists and MGM release, “The Addams Family 2” is in theaters and on demand on now.

As new movies open in theaters during the COVID-19 pandemic, IndieWire will continue to review them whenever possible. We encourage readers to follow the safety precautions provided by CDC and health authorities. Additionally, our coverage will provide alternative viewing options whenever they are available.