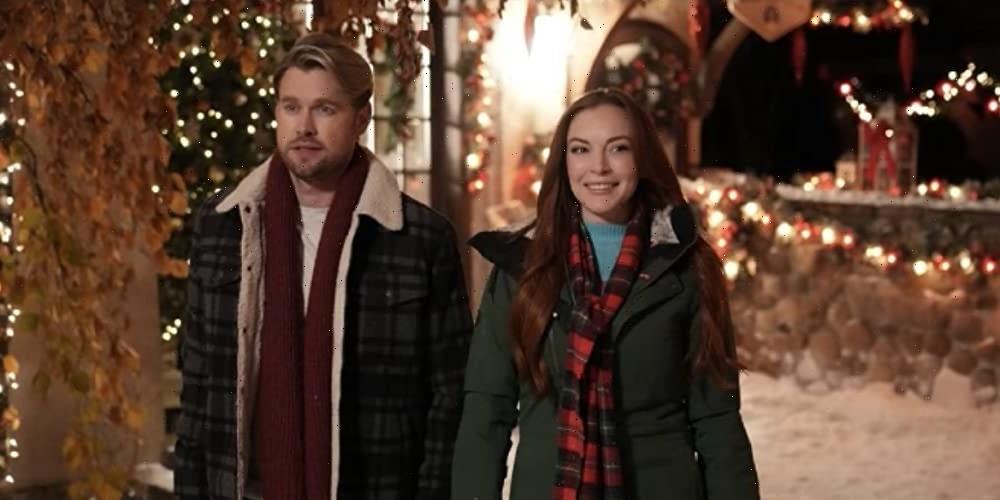 For every classic Christmas movie, there are 10 more you’ve never heard of. It’s true. In the decades you’ve spent rewatching A Year Without a Santa Claus, National Lampoon’s Christmas Vacation, and Home Alone, hundreds (upon hundreds) of new holiday movies have been released. With the 2022 holiday season upon us, it’s literally impossible for you to catch every one you’ve missed, but you can start with this season’s new releases.

Mark your calendars for the 14 most buzz-worthy new Christmas movies of 2022, below.

Falling for Christmas is Lindsay Lohan’s long-awaited return to the screen, the first fruits of her two-picture deal with the streamer. Lindsay plays a newly engaged heiress who, after suffering a ski accident, is diagnosed with amnesia and left in the care of a handsome lodge owner (Chord Overstreet) and his daughter.

This new movie follows a holiday version of the Hannah Montana: The Movie plot: a burnt-out pop star finds love and inspiration in a small town. The movie stars Dexter’s Aimee Garcia and Freddie Prinze Jr.

In his first project post-This Is Us series finale, Justin Hartley stars in another of Netflix’s new holiday films, The Noel Diary. The film follows a man who returns home on Christmas to settle his late and estranged mother’s estate.

Another new take on Charles Dickens’ classic A Christmas Carol, this animated film hits Netflix on December 2. You’ll notice a few familiar voices in this film, which stars (the voices of) Jessie Buckley, Luke Evans, Olivia Colman, and Jonathan Pryce.

The release date for this Netflix movie is still TBD, but here’s what we do know: Best. Christmas. Ever. will star Heather Graham, Jason Biggs, and Brandy Norwood and follow two college friends stuck together for the holiday—one boastful and Valentino-clad with a seemingly perfect life, and the other…not so much.

Violent Night is a dark comedy for the holidays, starring Stranger Things’s David Harbour alongside Beverley D’Angelo, Cam Gigandet, and John Leguiziamo. David plays Santa Claus in this R-rated movie, who steps in to save the day when a wealthy family is held hostage by a group of mercenaries.

Two Dickens adaptations in one year, aren’t we lucky? Spirited stars Ryan Reynolds as Scrooge in a musical version of A Christmas Carol. It also stars Will Ferrell and Octavia Spencer, and it’s available on Apple TV+ and in theaters.

The Hallmark Channel’s Rockettes film debuts as part of the network’s Countdown to Christmas programming! A Holiday Spectacular takes place in 1958 and follows a Philadelphia heiress who puts her high-profile wedding plans on hold to pursue her one true dream: dancing as a Rockette in the Christmas Spectacular at Radio City Music Hall, of course!

One of four new holiday movies hitting HBO Max this year, the Christmas Story sequel 39 years in the making is finally available to stream. The film follows a now-adult Ralphie returning to Cleveland Street to give his kids the magical Christmas he experienced as a child.

Starring Brooke Shields, Annelise Cepero, and Jeremy Sumpter, Holiday Harmony follows a singer-songwriter who finds herself in the small town of Harmony Springs, Oklahoma when her cross-country trip to fame runs off the rails.

Another small town holiday flick for HBO Max, A Christmas Mystery follows the lore of Santa’s bells. As the story goes, 100 years ago a strip of Santa’s bells were discovered by a child in Pleasant Bay, Oregon, bringing with it a century of good luck and prosperity to the town. But when the town realizes the bells are missing just days before Christmas, it’s up to a group of curious children to find them.

The fourth HBO Max holiday film, A Hollywood Christmas, will follow a young filmmaker who has made a name for herself by making Christmas movies. Her movie is threatened by a Scrooge-like (yet handsome) network executive, and the young filmmaker finds herself trying to save both Christmas and her Christmas film. This one drops December 1. They always say Hollywood loves movies about Hollywood, even during the holidays!

When Carlinhos learns his girlfriend is cheating on him right before they were supposed to go home for the holidays together, he improvises…by taking a total stranger instead. This holiday romance stars Gkay, Sérgio Malheiros, and Vera Fischer.

Your Christmas or Mine?

You’ll recognize Asa Butterfield from Sex Education in this holiday movie, which features him and Cora Kirk playing a couple who accidentally splits up and gets stuck with each other’s families for Christmas.