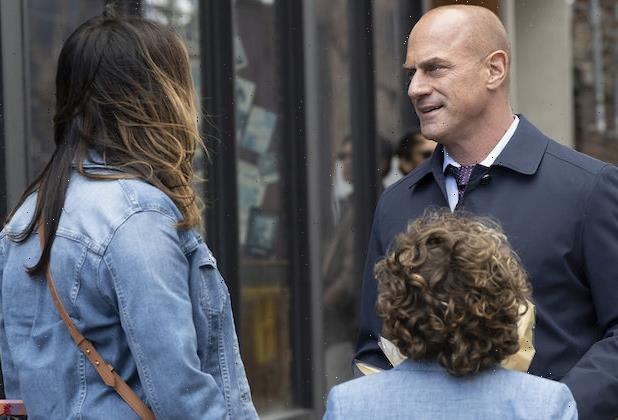 At the end of Law & Order:SVU on Thursday, Olivia Benson ran into her old NYPD partner Elliot Stabler on the street in Manhattan. She was accompanied by her young son, Noah, who met Stabler for the first time.

And fans who watched the episode on Hulu on Friday… didn’t see the scene at all.

The Benson/Stabler meet-up was a bridge between SVU and the crossover episode of Law & Order: Organized Crime that followed. (Read our SVU recap here and our OC recap here.) Viewers who watched the live broadcast witnessed Olivia’s Mother’s Day get interrupted by a work call that caused her to ask Elliot whether he knew a cop named Jessie Santos, and then take Noah home quickly. In the next scene — and without a commercial break between the episodes — Liv was at Organized Crime to propose that SVU and OC work together to find the kidnapped daughter of Santos, an NYPD officer who happened to be part of the police corruption ring Elliot had been investigating.

But those who streamed the crossover Friday saw SVU end with Noah hugging his mom at brunch, and Organized Crime begin with Benson visiting OC Bureau headquarters to suggest the joint investigation — though a snippet of the post-brunch street scene appears at the end of the “Previously on…” segment at the top of the hour.

We’re hearing that the editing could have happened as a result of fitting the episodes to the streaming format, as well as to avoid potential SVU viewers’ confusion regarding Benson mentioning a cop/case that wouldn’t be resolved on that show.

Do you have thoughts about the crossover’s MIA scene? Hit the comments and let us know!