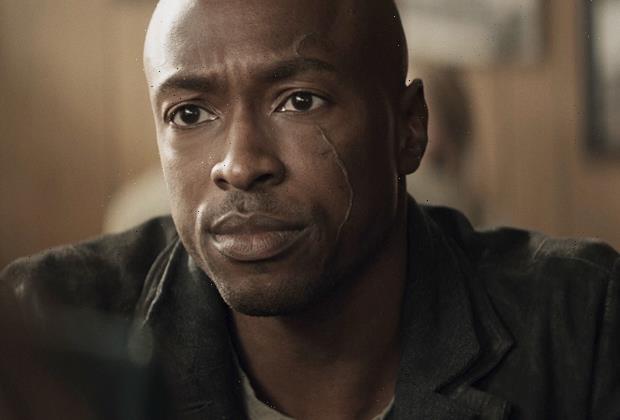 “Captain Luthor”? Not so fast.

Tuesday’s episode of Superman & Lois revealed that Wolé Parks‘ character, who was previously suspected of being Lex Luthor from another earth, is actually John Henry Irons, an iconic DC Comics character who fights under the name Steel.

“When they told me I was going to be playing John Henry Irons, I was overwhelmed, a little emotional,” Parks tells TVLine. “I remember growing up with him, but it’s not just me anymore. There are other kids who grew up with this [character], and there are kids growing up now who will know a different version of it. The responsibility is crazy. This is by far my most important role, if I want to phrase it that way, and I don’t take that lightly.”

Jai Jamison, who wrote the episode (appropriately titled “Man of Steel”), echoes Parks’ sentiment: “As a lifelong nerd who grew up reading comic books and used to dress up like Superman when I was five years old, being able to play in this sandbox has been ridiculously surreal. Getting the opportunity to write the episode that reveals John Henry Irons and introduces Natalie, that’s another level of fortune. I’m pinching myself. Like Wolé said, I understand the responsibility of it all.”

Who’s Natalie, you ask? Why, none other than John and Lois’ daughter from the other earth. Jamison credits executive producer Michael Narducci with the idea of adding a branch to Lois and John’s family tree, but the inspiration for Natalie’s personality came from Jamison quarantining with his own younger sister while writing the episode.

“I definitely modeled certain aspects of that character after her — her wit and how smart she is,” Jamison says, adding that one of his favorite moments to write was John and Natalie teaming up to build the suit. “The fact that Natalie helped build a super suit that can go toe to toe with Superman is a really cool idea. Being able to introduce her and show this side of John was important to me.”

In addition to the inspiring moments of father-daughter bonding, the episode also flashed back to some darker events, including the time John and Natalie watched as Lois was killed during a live news broadcast. It was one of several disturbing moments that illustrated how the show’s “villain” was shaped by trauma.

“He’s absolutely traumatized,” Parks says of John. “That’s not something that goes away just because he’s hanging with a version of his ex-wife. He saw her die, and that trauma is still within him.” As for the difficult task of developing the non-couple’s complicated dynamic on Earth-Prime, Parks explains, “Even though Lois doesn’t know him, I want it to feel like they could be married. She’s still the same person [from his earth], she just married someone else. If she’d met John before Clark, they could be together.”

The revealing hour was packed with dramatic dialogue, but Parks spent the most time working on one specific part: John’s Kryptonian line, which finally enabled Superman to crack the mystery of the Stranger. “In the script it said ‘I think you know, Kal-El!’ and then it just said ‘spoken in Kryptonian’ underneath” Parks recalls with a laugh. “I know it’s not a real language, but I don’t speak Kryptonian. I reached out to the assistants and was like, ‘Can someone send me a version of this so I can hear it phonetically?’ It had to sound believable. I wanted it to feel natural.”

“I pitch speaking in Kryptonian a lot,” Jamison adds. “The idea was that the Kryptonians took over John’s earth, so he learned their language in the way that a lot of people in Prague know Russian because of the occupation during the Soviet Union. It’s a similar concept to that in terms of why John would know Kryptonian.”

Parks admits, “I didn’t know that aspect. I just figured that he’s a loner, which is actually something I love about John. His superpower is his mind. He doesn’t have heat vision and all that other stuff, so he has to build everything. He would think that the best way to beat his enemy would be to learn from them.”

Without giving away too much (or anything), Parks confirms, “We’re not done seeing John Henry Irons’ world — and that encompasses a lot of things.”

Your thoughts on Superman & Lois‘ big John Henry Irons reveal? Drop ’em in a comment below.