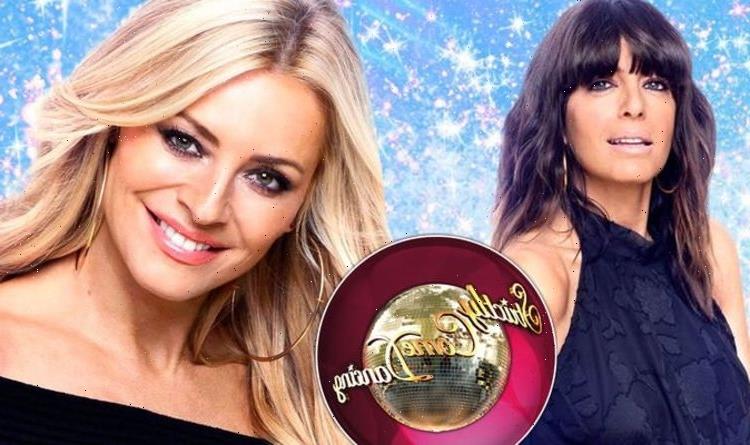 Strictly Come Dancing cheered everyone up last year as it returned to BBC One, despite there being doubts surrounding whether or not it could go ahead given the coronavirus pandemic. Thankfully, the colourful series wasn’t cancelled and saw comedian Bill Bailey and professional dancer Oti Mabuse crowned as the champions. Soon, it will be someone’s elses turn to lift up the Glitter Ball trophy.

For the past few weeks, the BBC has slowly been revealing this year’s line-up for Strictly.

With all 15 stars now announced, viewers have been waiting for the release date to be announced so they can pencil it into their diaries.

This year though, it wasn’t the show that made the big reveal but one of its contestants.

When is the Strictly 2021 start date?

Journalist Dan Walker famously presented Football Focus for more than a decade before joining the team on BBC Breakfast.

In response, Dan took out his phone and said: “I was just going to put your date in the diary.

“I meet and greet the partner in a couple of days time, and actually the first show is on the 18th and then the live shows start on the 25th.”

When talking about greeting his partner, Walker is referencing his professional dance partner for the entirety of Strictly 2021.

Usually, there is a show where the contestants don’t compete but are paired up with their partners.

This initial episode will air on Saturday, September 18, on BBC One.

After this, the live shows are going to kick off the following week on Saturday, September 25.

Even before the series has started, there are some favourites in the running to be named the Strictly 2021 winner.

McFly star Tom Fletcher is an early front runner according to bookmaker Coral which puts him down for 4/1 odds.

Coral spokesperson Harry Aitkenhead said: “Tom Fletcher tops our betting for Strictly Come Dancing this year, making him the early favourite at 4-1 as the celebrities tune-up ahead of their first dance on the show this autumn.”

He is closely followed by EastEnders’ Ayling-Ellis with 6/1, Stephenson at 7/1 and comedian Robert Webb and presenter AJ Odudu who are both at 8/1.

Bruno Tonioli will once again not be taking part on the panel this year due to ongoing uncertainty around travel regulations thanks to the pandemic.

He is currently residing in America and, like last year, is expected to crop up from time to time to give his opinion on the performances.

Strictly Come Dancing will return on Saturday, September 18, on BBC One.