Strictly Come Dancing has moved into the fifth week of the competition, but for Dev Griffin and Dianne Buswell, they sadly won’t be taking part in the show after they were the third couple to be eliminated on Saturday night. Joining Rylan Clark-Neal on the sister show It Takes Two, the professional dancer revealed the promise she ‘broke’ to Dev.

Dev and Dianne danced the Cha Cha Cha this weekend and scored 27 combined points from the judges after a mixed bag of feedback.

Sadly they didn’t impress enough of those at home to be voted through to week five and found themselves in the bottom two against Emma Weymouth.

When it was the judges chance to vote, it went unanimously in Emma’s favour, meaning it was time for Dev and Dianne to hang up their dancing shoes.

Speaking about the moment they were told they were in the dreaded dance off, Rylan asked: “Dianne, I’ve got to ask you though, what was going through your mind when that light went red and you were like ‘we’re in the bottom two?’ 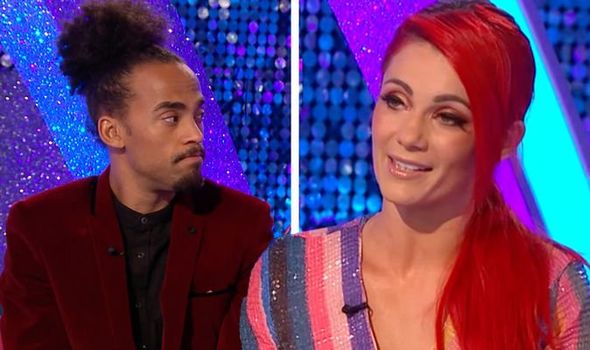 “I was also in a lot of shock, I didn’t think Dev would be in the bottom two for a while actually, if at all,” Dianne explained.

“I think he did an amazing job on Saturday night and I thought his dance off dance was even better.

“I’m so proud of him and really upset we were in the bottom two and happened to leave the competition.”

“I want to know what you said to each other when that light went red and you’re waiting for that dance off performance, what was the pep talk?” The host asked.

And Dianne replied: “I feel like I promised Dev we were going to be fine and then, we weren’t.

“But then we picked ourselves up and we thought ‘we could be safe here if we really go out’.

“They [the judges] actually gave us great comments, they said the dancing was great, it was they just wanted him to be more cheeky in that Cha Cha.

“I feel Dev went out there and did exactly what they said and, yes we approached it in that way,” she added.

It comes after Dev and Dianne took to the dance floor for their final dance during last night’s result show.

However, those watching at home saw no dancing, instead Dev was comforting a sobbing Dianne.

Speaking about her reaction, Dianne said: “Dev has been such a gentleman, I couldn’t have asked for a better partner.

“He worked so, so hard and I’m just really sad it’s come to an end.”

BBC One viewers were left furious following the result, with many unable to comprehend why Dev had been eliminated.

“Cannot believe this, I thought he was much better than many on Saturday night.” Someone else wrote.

A third added: “Absolute joke. Two of the best gone. You couldn’t even vote for them! Ridiculous decision.”

Strictly Come Dancing returns Saturday at 6.40pm on BBC One and It Takes Two airs weekday evenings at 6.30pm on BBC Two.