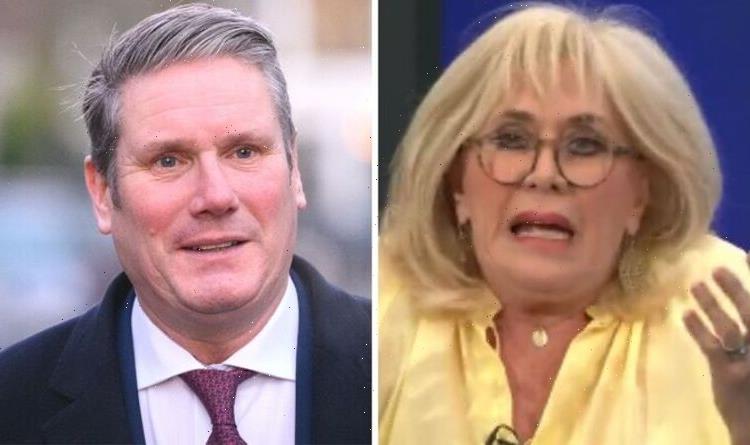 The columnist blasted Sir Keir Starmer during Liam Halligan’s Money Talks segment on GB News as they discussed Boris Johnson’s Partygate fine. The debate came after Mr Johnson issued an apology for breaching the law after several parties took place at Downing Street at the height of lockdown. However, Malone insisted “now is the wrong time for a change of leadership”.

The TV presenter defended the Prime Minister during the segment on GB News as she admitted the thought of Mr Starmer taking over from Mr Johnson “makes me shiver with fear”.

“Imagine a general election now,” the GB News host chipped in as Malone replied: “Can you imagine?

“Starmer, this is the bloke who can’t say what a woman is! Do we want him in power? Do we want Angela Rayner as Chancellor?”

“It makes me shiver with fear when I think about that,” she continued.

Discussing Mr Johnson’s party and how he shouldn’t have lied about it, Malone added: “Yes Boris has let us down with this, although when you look at the party, it wasn’t exactly a party, he walked into something, into a meeting where they had birthday cake for him.

“He should’ve walked straight back out again and he shouldn’t have lied about it.

“However, I think now is the wrong time for a change of leadership, we need to be steered through this cost-of-living crisis.”

“And it’s very important that Boris stays in place for this war because he’s chivvying people all the time,” she went on to add.

Malone’s remarks left GB News viewers divided, and while many agreed with her views, others felt the columnist was “scaremongering”.

While Christopher Christie penned: “I don’t often agree with @thecarolemalone but she’s on the money with her comments on @Keir_Starmer.”

User @right_side1 disagreed: “Carole is a scaremongering i***t, if @BorisJohnson resigns there won’t be a G/E there will only be a @Conservatives leadership contest but if he does not resign the next G/E may lead to Starmer being PM because a lot of @Conservatives will not vote or will vote for a new party.” (sic)

“Does she not realise that they would just replace Boris with another Conservative? It’s not rocket science Carole,” KJ Russell said.

On Tuesday, Mr Johnson issued a statement where he addressed the Partygate scandal.

He said: “Today I’ve received a fixed penalty notice from the Metropolitan Police relating to an event in Downing Street on 19 June 2020.

“Let me say immediately I have paid the fine and I once again offer a full apology.

“And in the spirit of openness and humility, I want to be completely clear about what happened on that date.”

He went on to admit that he didn’t realise he was breaching the rules following a “brief gathering” at Downing Street.

The Prime Minister added: “I understand the anger many will feel that I myself fell short when it came to observing the very rules the Government I lead had introduced to protect the public. And I accept in all sincerity that people have the right to expect better.

“Now I feel an even greater sense of obligation to deliver on the priorities of the British people, strengthening our economy, creating jobs and opportunities, levelling up across the whole of the United Kingdom and now, of course, ensuring that Putin fails in Ukraine and easing the burden on hard-working families caused by higher energy prices.

“I will take forward that task with due humility but with maximum determination to fulfil my duty and do what is best for the country I serve. Thanks very much.”

Liam Halligan’s On The Money airs weekdays at 1pm on GB News.