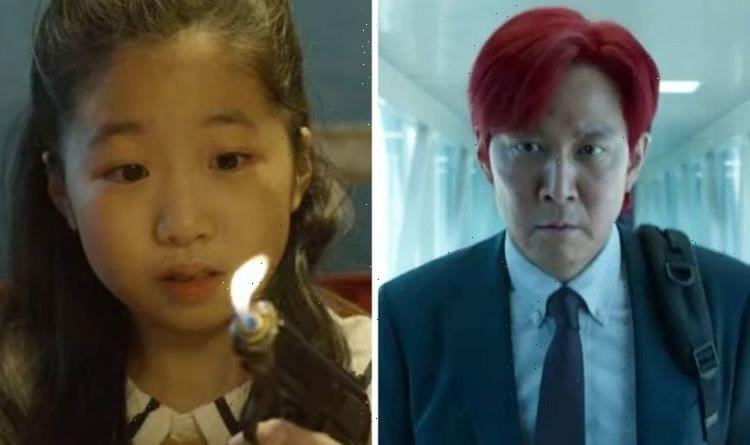 Squid Game installation set up at The Trafford Centre

Seong Gi-hun (played by Lee Jung-jae) left the wildly popular Netflix series wide open for a second season with a shocking decision in the finale. Now confirmed to be returning for another instalment, Squid Game could completely defy expectations when it continues after showrunner Hwang Dong-hyuk shares his original vision for the ending.

Hwang recently confirmed the first season of Squid Game almost went in an entirely different direction in the first draft.

Having neglected his family due to crippling gambling debt, Gi-hun once again turns his back on his daughter to investigate the brutal underground competition further.

However, the writer and director of the series almost concluded the last episode with Gi-hun turning his back on the games for good.

He told Entertainment Weekly: “We actually wrestled between two different scenarios for the ending.

“There was one, the other alternate ending, where Gi-hun would get on the plane and leave.

“And then there was of course the one where he would turn back and walk towards the camera.”

Gi-hun’s relationship with daughter Ga-yeong (Cho Ah-in) was one of the highlights of the early episodes of the series.

Sadly, his financial burdens meant he was unable to support his family properly, and Ga-yeong eventually went with her mother and stepdad to America.

Finally, in the position to visit her after taking home the 45.6 billion won prize, Gi-hun made a surprising split-second decision in the final moments of the finale.

Hwang explained: “We constantly asked ourselves, is it really right for Gi-hun to make the decision to leave and go see his family, to pursue his own happiness?

“Is that the right way for us to really propose the question or the message that we wanted to convey through the series?”

Throughout the first season, Gi-hun is constantly putting himself above others despite his crippling debts.

He is shown stealing money from his mother and using the funds intended for his daughter’s birthday to fuel his gambling addiction.

When he’s finally given the chance to take his life into his own hands, he arguably acts in his own self-interest yet again by deciding not to board the plane to America.

Gi-hun could realise this at the start of season two and make a quick stop in the States before continuing his quest for answers.

The creator continued: “The question that we want to answer [is] why has the world come to what it is now?

“[It] can only be answered or can only be proposed if Gi-hun turned back and walked towards the camera. So that’s how we ended up with that ending in the finale.”

Hwang’s new ending perfectly sets up more answers to come in season two, but Squid Game fans may not be completely satisfied until Gi-hun sets aside some time to patch things up with his family first.

Squid Games is available to stream on Netflix.