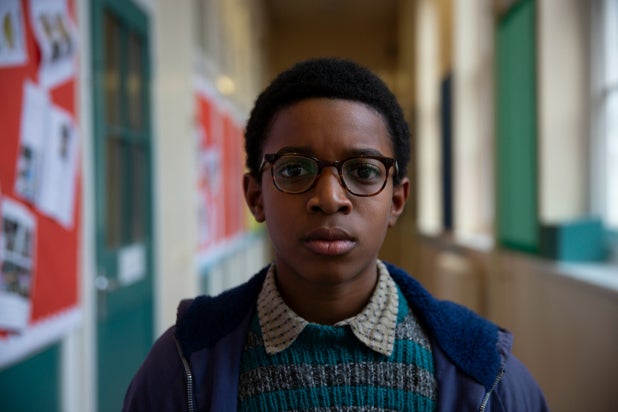 Children are the future, as Whitney Houston famously reminded us, and both have to be fought for, as Steve McQueen so powerfully expresses in “Education,” the fifth and final chapter of “Small Axe,” his anthology for Amazon Studios and the BBC.

In many ways, this is different than anything else in the director’s filmography — it’s the first time he’s had a pre-teen protagonist, for one — but its urgent sense of a community banding together to create opportunity and to dismantle institutionalized racism makes it very much of a piece with the four other films under the “Small Axe” umbrella.

It’s the story of a family, although we begin following young Kingsley Smith (Kenyah Sandy, “Jingle Jangle”), who has dreams of becoming an astronaut and possibly also playing for Tottenham F.C. When it’s clear that he’s having issues reading — his white teacher calls him a “blockhead” in front of the class — and with occasionally acting up, the school ships him off to a “special” institution. The brochure talks a good game about smaller classes and more individualized attention, but Kingsley has been shipped off to the place where all the students who were dragging down their old schools’ test scores get sent to be ignored.

(There’s a sequence in which a “teacher” subjects the class to his atonal guitar-playing and vocals on a rendition of “House of the Rising Sun” that goes on and on, achieving an Andy Kaufman-like level of hilarity and discomfort.)

When Kingsley tries to tell his parents what’s going on, they are resistant; his mother Agnes (Sharlene Whyte), exhausted from working multiple jobs, isn’t listening at first, and his father Esmond (Daniel Francis, “Once Upon a Time”) thinks education is overrated anyway, and that Kingsley should learn a trade, like carpentry. It’s only after some neighborhood activists visit with Agnes to explain the situation — and leave her a pamphlet by advocate Bernard Coard — that she begins to understand how IQ tests are used to discriminate against West Indians in the United Kingdom, and that being shunted off to a school for the “educationally subnormal” follows a person throughout their entire life, limiting their employment and financial prospects.

Agnes’ awakening mirrors many of the other “Small Axe” plots, with a community coming together to fight injustice (as in “Mangrove”) and the sharing of literature as a means of prompting understanding (as when a fellow inmate gives the protagonist of “Alex Wheatle” a copy of C.L.R. James’ “The Black Jacobins”). Kingsley and his sister Stephanie (Tamara Lawrance, “Kindred”), like Alex Wheatle, have their eyes opened to their history, only for them it’s when they begin to attend Saturday classes in the neighborhood, as McQueen himself did as a child. (The real-life Wheatle is credited here as a “Writers Room Special Consultant.”)

The Kingsley-centered moments of “Education” feel like McQueen covering new ground; whether or not it’s the autobiographical aspects of this coming-of-age tale, the empathy and innate understanding of this character feels right up there with Truffaut’s “Small Change” among the screen’s most touchingly immediate portrayals of youth. He is helped in this regard by the talented Sandy, whose open face communicates a multitude of emotions, whether or not he’s speaking. The film runs just an hour, but the whole cast finds a way to convey a sense of specificity to each character, particularly Naomi Ackie (“The End of the F***ing World”) as a psychologist who goes undercover at the “special” school to get the names of the children who have been sent there.

McQueen and co-writer Alastair Siddons capture that sense that the children of immigrants often have of living with one foot in their adopted country and one in their parents’ homeland. And while McQueen brings his trademark intensity to some moments where Kingsley’s parents lose their patience with him, those scenes are balanced by later sequences where they support him (and divert their anger to a school system that is giving them the bureaucratic run-around).

The director’s long-takes, executed here by director of photography Shabier Kirchner, make Kingsley’s efforts to read agonizingly relatable. The art directors and set-decoration team make each of the film’s locations indelibly specific, from the vast difference between Kingsley’s two schools to the genteel parlor of the Smith household, which children of the ’70s will recognize as the kind of space that was reserved for guests only.

Put together, the five films of “Small Axe” summon the past as a guidepost for the future — this is both a motif and a function of these works — reminding us that oppressed communities have, and have always had, the power to band together to fight for themselves. (How great it would be to see the “Small Axe” of feminism, or the LGBTQ+ community, or of the multitude of Latine cultures that exist worldwide.) These films are both rallying cries and celebrations, reminders of what has been overcome and a spotlight on what still needs to be vanquished.