Sorvino has played her fair share of women from the past, most famously portraying Marilyn Monroe in the 1996 TV movie, “Norma Jean and Marilyn.” Her latest series, the Starz horror-comedy “Shining Vale,” sees Sorvino play a muse (of sorts) opposite Courteney Cox portraying a writer looking for her next hit. As a 1950s ghost haunting Cox’s Pat Phelps, Sorvino appreciated Rosemary’s devilish “glee” at getting a second chance to live through Pat and her family.

For the actress, there’s certainly an awareness of how things have progressed for women since Monroe’s day — part of Rosemary’s attraction to Pat is that the latter lives in a more permissive era — and yet so much remains mired in the past. “Being a member of the female gender sets us up for such a different life than say if we were a straight cisgender white male from an affluent background,” Sorvino told IndieWire in a recent Zoom conversation.

Sorvino went on to discuss looking at classic film and TV to find inspiration and how she thinks about dated depictions in our current era of nostalgic love. This interview has been condensed and edited for clarity.

INDIEWIRE: What initially stuck out to you about “Shining Vale” and Rosemary, specifically?

Mira Sorvino: There was a kind of anachronistic glee [and] this zeal to be alive, because she’s been dead for 70 years, and to communicate and to live life to the fullest in an impossible way. Because her idea of what the good life is is spoon fed from ’50s movies, and glamorous movie stars holding parties and holding court, and going to Paris, and dancing and singing. That escapist life that we all go to the movies for. When we see her, I feel like she’s trying to be this image of womanhood that never really existed, but that she got from the movies.

There was something very fascinating about her personality and she’s just super fun to play. She’s a real mixed bag. She may have some mal intent at some point, but I don’t think that’s her driving thing. She wants to be alive, she wants to connect, she wants to have meaning even if the means those ends are destructive. Because she is from the other side of the ectoplasm eventually she’s going to cause mayhem because that’s her nature. But I never tried to judge her. I always wanted to make her think she’s a creature of these circumstances. 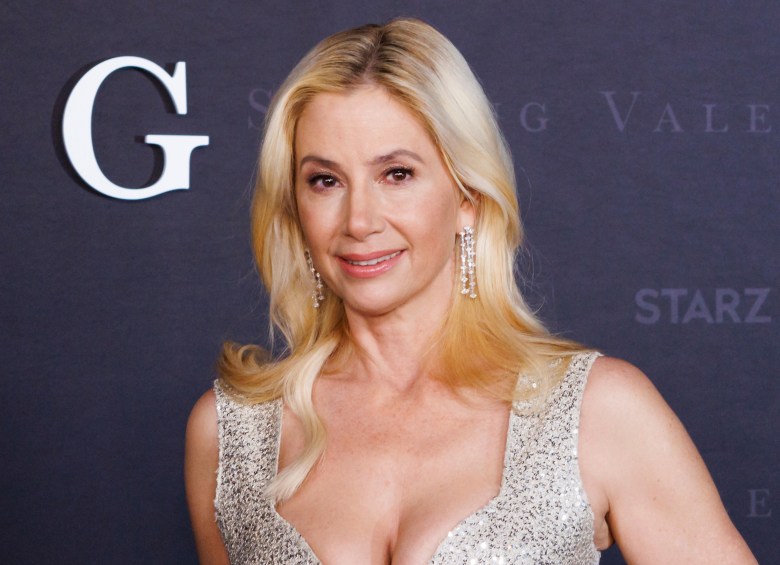 What classic films and TV shows did you draw inspiration from for the character?

When I was first working on her, I was looking at classic housewife television shows from that era, like “Ozzie and Harriet,” or “Leave It to Beaver,” or “The Donna Reed Show.” I was so struck with how shallow the life that you were supposed to be seeing was, especially in “The Donna Reed Show.” [It] is this endless round of dinner parties, and swapping recipes, and keeping up the Joneses. The energy to maintain that must have been so hard. Even just that social expectation that you had to keep up; this schedule in this country club life. It just seems so unreal.

I’m a huge fan of Hitchcock and “The Postman Always Rings Twice,” [so] that femme fatale thing is her, too. She’s fun, gay, social, fearless leader and she’s also the femme fatale. She’s also a broken, scared woman who keeps popping through. While you’re watching, happy and delighted Rosemary talk sometimes real, human Rosemary cries out for help through her. It’s like, “Wait, help me. I’m still lost. I’m still scared. I’m still depressed. I’m still full of rage.” Getting to know [co-creator] Jeff Astrof early on I was, like, “Wow. This guy is so creative and so funny, and really seems game to expand the role to fit anything I say I might be interested in doing.” I was like, “Wouldn’t it be fantastic if she [Rosemary] could do one of those Fred Astaire dances with the mop?” And he was like, “I’ll do it!”

Rosemary sees our current landscape as more permissive than her day. Having played Marilyn and looking at that time do you think there’s truth to her thought process?

We’ve progressed a lot from the ’50s… and yet we’re still struggling with the same things. Sexual violence is as rampant as ever. People are still trying to exploit those power dynamics and destroy lives in the process. Racial inequity and racism; we have enacted laws and we have tried to institute practices that make things more equal, but we have a long way to go because the ugliness of racism still exists, is still so pervasive, just like the ugliness of sexism.

I don’t think Terry’s [Greg Kinnear in the show] really done anything to make Pat cheat on him. They’re all fighting their own battles. They’re all in a midlife moment where they’re looking for meaning. They’re [asking], “Is this what I’m supposed to be doing?” There’s this Iago-like impulse in the human species to be so self-centered that it will hurt people [who] are supposedly close. Yes, we’ve come a long way, baby but certain things will never change.