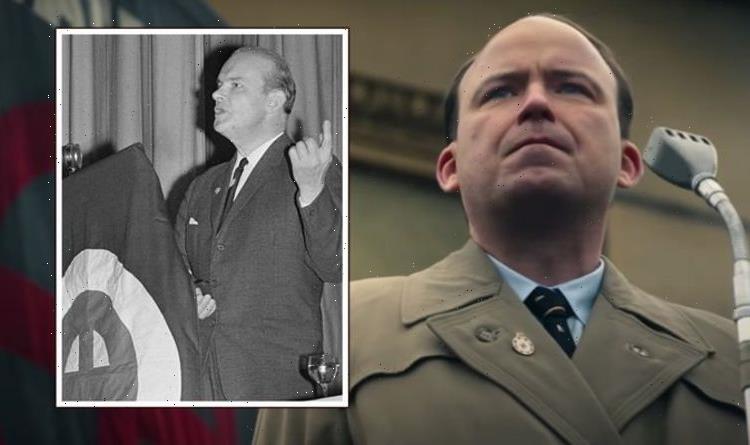 The four part drama reaches its penultimate episode tonight. An unexpected arrival complicates Vivien’s plans to exploit Colin Jordan’s — the leader of the National Socialist Movement (NSM) in the UK — growing affection for her. Soly is unsuccessful in his attempts to convince the police of the threat to the Jewish community posed by the NSM.

And so the 62 Group are forced to take matters into their own hands.

The drama has stunned, leaving many in the UK shocked at how rife the NSM was — an Adolf Hitler-supporting group out in force only 60 years ago.

But while Ridley Road portrays a London seemingly gripped by neo-Nazi fervour, real-life reports from the time reveal a different side to the story.

Some newspapers back then described Jordan’s outfit as “Britain’s tiny jackboot-and-swastika Nazi party”.

One of the show’s depictions of a great moment for his fame was a pro-Hitler demonstration in Trafalgar Square on July 1, 1962.

However, it is believed that it attracted very little support.

The Times of July 2, 1962, reported: “Throughout the meeting the speakers, Mr Dennis Pirie, deputy secretary, Mr John Tyndall, national secretary and Mr Colin Jordan, leader of the movement, were continually shouted down and pelted with pennies, tomatoes and rotten eggs, by an overwhelmingly hostile crowd of some 2,000.

“The few people who did raise their hands in an earnest Nazi salute looked distinctly nervous.”

The Daily Mail of the same date said: “Police struggled to keep the angry crowd, many of them Jews, away from the speakers.

“Hundreds of men and women chanted ‘Six millions! Six millions!'” a reference to the Jewish people who died under the Nazis.

According to Peter Hitchens, writing in the Mail, one of Jordan’s fellow Nazis was “quite badly beaten”.

The group then fled the angry crowd.

Jordan managed to escape only because of a ring of police protection who blocked the Underground while he slipped away.

The High Court eventually ruled that Jordan had broken the Public Order Act of 1936 by using insulting behaviour.

By this time, he was already in prison.

In October 1962, he had been sentenced to nine months’ imprisonment for attempting to mobilise a private army.

A year later and after his release, in a bizarre turn of events, Jordan married his friend and fellow NSM leader’s wife, Françoise Dior.

She was the former wife of a French nobleman, and also the niece of the French fashion designer Christian Dior.

In what was a short-lived marriage, the pair split in 1964 after Dior claimed Jordan had become “bourgeois”.

The 62 Group, the outfit that sought to crush the NSM, was founded in 1962 by a Jewish Nightclub Manager Harry Bidney, who based it on the earlier, post-war ‘43 group’.

It quickly grew into one of the largest Jewish militant groups of its time, protesting against Oswald Mosley’s British Union of Fascists and the then-emerging white-supremacist movement the National Front.

While the group no longer exists, a magazine founded by Gerry Gable, a former member, is still published online, called Searchlight.