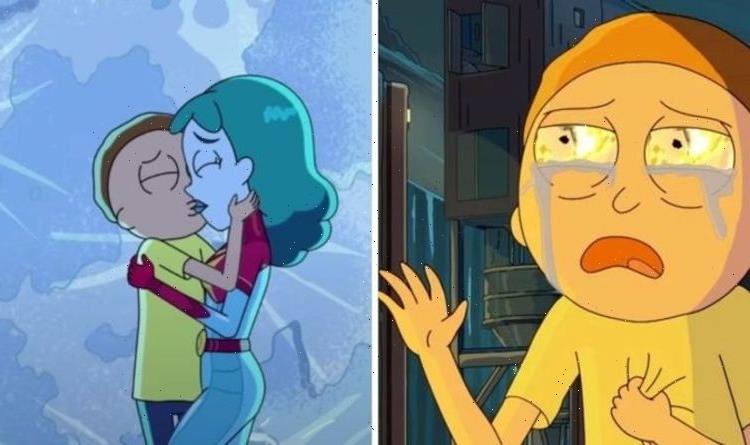 Season five of The Adult Swim sitcom finally returned to screens last month, with new episodes coming soon to Hulu, Netflix and HBO. Episode three gave fans a different insight into Morty (played by Justin Roiland) after he fell in love with Planetina. This week, however, writer Rob Schab revealed the original ending was axed.

The episode titled A Rickconvenient Mort, saw Planetina and Morty profess their love for each other.

She was a heroine who protected earth and created by the Tina-Teers using dirt, air, water and fire.

The pair had gone on a series of dates and even make it official by telling the media during a live interview they were an item.

Throughout the series, Morty committed many murders to deal with their haters.

Specifically, the Tina-Teers who wanted to get rid of him so Platina could focus on her mission.

After murdering her, Morty was shocked and saddened when his mother Beth (Sarah Chalke) was against their relationship.

Without the Tina-Teers, Planetina’s mission to save the Earth became violent and this filled Morty with horror.

Despite being a murderer, he watched in tears as she burned a mining facility with people inside.

The episode ended with Morty sobbing into his mother’s arms after he chose to end the relationship as he couldn’t be with a murderer.

The series which is usually light-hearted and hilarious ended on a sour note.

However, the show’s co-creator Dan Harmon recently revealed they had to scrap the original planned ending.

In the Youtube interview with Adult Swim, he said: “I thought it would be the biggest mistake in the world to end an episode like that with her dumping him.”

The show’s writer Rob Schrab, added: “At first it was going to be Morty getting his heartbroken for the first time, but it wasn’t until Dan said no, this is a story about Morty breaking somebody’s heart.”

Director Juan Meza Leon said: “Morty was going through a growth and a loss, we tried to capture that by treating it like an actual dramatic story.”

Speaking about Beth’s reaction, Rob said: “This is the first time we’re getting to see Beth be motherly, usually the joke is that she doesn’t care about her kids.”

“I get the most emotional when Beth comes in and comforts Morty, after that scene I was a wreck” the writer confessed.

Speaking more on the episode, Dan Harmon explained: “Yes, love ends in tragedy but it would’ve been too easy to be cynical like ‘oh love isn’t real.”

With Morty having a love interest, perhaps this means fans will see a more serious side to the show’s characters this season.

This also goes for Beth, whose attempt at parenting is far from perfect and considered humorous amongst fans.

All episodes of Rick and Morty is available to stream on Adult Swim.