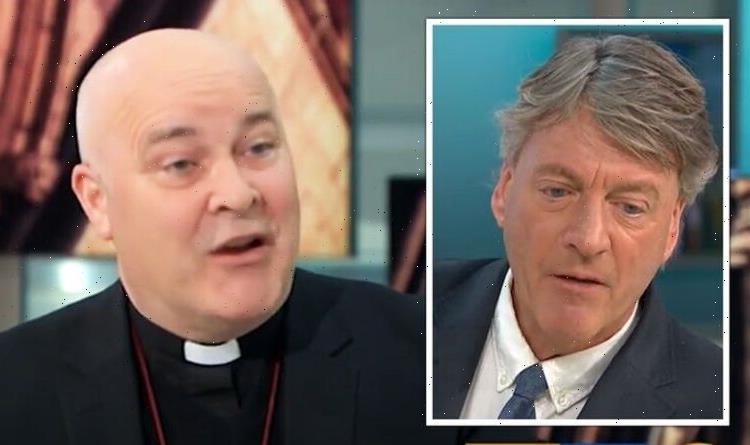 GMB: Richard Madeley hits out at Archbishop of York

The 98th Archbishop of York Stephen Cottrell deplored the ongoing Ukraine conflict when he appeared on Monday’s instalment of Good Morning Britain. He told host Richard Madeley the only way to counter the “terrible evil” witnessed is “with peace and reconciliation”. However, Richard interjected to probe the Archbishop on his views on punishment.

The Archbishop began: “To have seen terrible evil and to have witnessed terrible evil, I can’t help but wonder if there are any [malign] forces which align with those.

“We all know as human beings that we are capable of doing and saying terrible things which is why I am speaking to you in Holy Week.

“The message of Easter, which is where the Christian faith begins and ends, is that death doesn’t have the last word.

“Even in the midst of the most terrible suffering, we find a narrative of hope and it’s that which I want to concentrate on.

“All I know is there’s evil, it’s real, and we need to counter it and the only way to counter it is with peace and reconciliation and love – the things we see in Jesus Christ.”

However, Richard interjected: “But what about retribution and punishment as a man of God, presumably you’d want to see these perpetrators [punished]?

Richard’s co-host Ranvir Singh clashed over the role of religious leaders in the war between Russia and Ukraine during the same interview.

It comes in the wake of the Russian Orthodox leader Patriarch Kirill of Moscow being seen as a vocal supporter of Russian President Vladimir Putin’s brutal invasion.

Ranvir told the Archbishop: “It’s that dichotomy of having two men who were at the height of their religious power in terms of authority in the human world, talking to the congregation, talking to people, trying to broker peace.

“That two men at the top can have completely diametrically opposed views of right and wrong, and good and evil over something that’s going on in Ukraine.”

“I’m not disagreeing with you but again, I would want to come back to the heart of the Christian faith is the person of Jesus Christ.

“He is the one we follow, his followers are frail human beings with a great capacity to get things wrong, but the message is one of hope and peace and justice.”

Patriarch has made statements defending Moscow’s actions in Ukraine and views the conflict as a “bulwark against a Western liberal culture” which he considers decadent.

It has been widely reported he called on the public on Sunday to rally around the authorities as Moscow pursues its military intervention in Ukraine.

His campaign has infuriated some within the Orthodox Church.

Good Morning Britain continues weekdays between 6am and 9am on ITV.