Whitney Rose blew up her life a decade ago, so signing up for reality TV didn’t really give her much pause.

“There’s one thing that I believe by and that’s, own it,” the Real Housewives of Salt Lake City star tells ET, maybe subconsciously channeling another Housewife, Beverly Hills‘ Lisa Rinna, who’s made “own it” her catchphrase.

Whitney “owns it” from the jump on RHOSLC, revealing in the premiere episode that 10 years prior, her first marriage ended after she entered into an affair with her now-husband, Justin, who was also married at the time. When she got divorced, Whitney became “unofficially excommunicated” from the Mormon Church, a big deal for a lifelong Mormon with family ties to the earliest days of the religion.

“I wasn’t forced out, which is shocking,” she explains. “An unofficial excommunication means that you leave by your own free will. I stopped practicing, I removed my Mormon garments that I was wearing, which is the underwear you receive when you make a commitment in the Mormon Church.”

Whitney jokes she might become officially excommunicated from the Church, though, once RHOSLC starts airing, but she’s OK with that.

“Yes, I’ve already blown up my life — in a way that is unimaginable,” she says. “I’ve lost family, friends, I’ve hurt tons of people. I’ve been judged, I’ve been… everything, so it’s almost like therapy to sit here in front of the world and say, yes, this is how it started. I made that choice — a lot of people do — but a lot of people don’t own it, and owning it has helped me create a firm foundation and a stable life.”

That journey will be on full display in RHOSLC‘s debut season, which Whitney describes as “one big, giant mirror” that’s helped her see just how much she’s grown in 11 years since the now-34-year-old decided to walk away from the only life she knew. The season premiere features a vow renewal between Whitney and Justin to mark their 10-year anniversary. While that may not seem controversial, vow renewals don’t have the best track record for marriages on The Real Housewives (see the divorces of Vicki and Donn Gunvalson, Cynthia Bailey and Peter Thomas, Shannon and David Beador, and Ramona and Mario Singer, just to name a few). 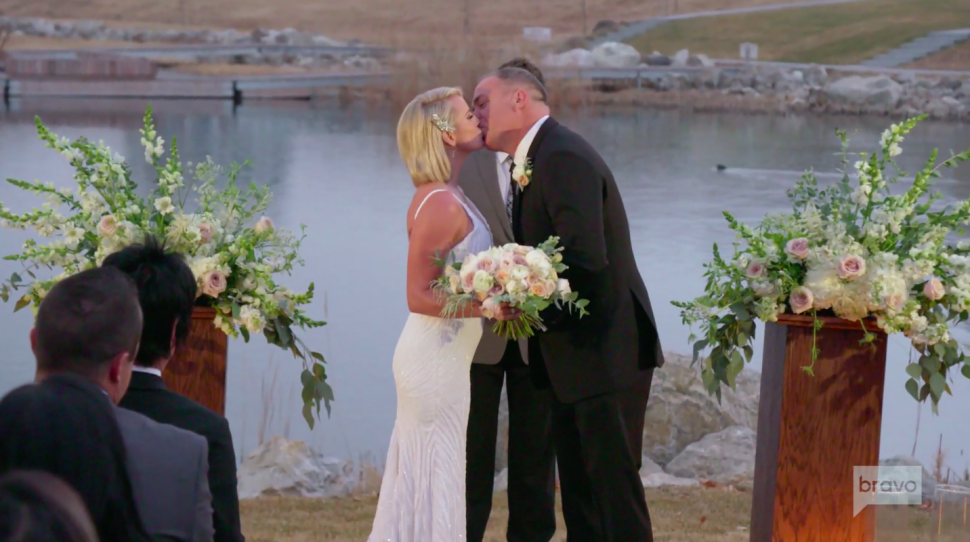 “The vow renewal was happening regardless of the show,” Whitney promises. “That was something that Justin and I said, we always joked that if we made it to the 10-year mark — which in and of itself being a second marriage and an affair, we already beat, like, every odd against us, right? So, here we are and it was important to us to celebrate that.”

“I didn’t get my dream wedding,” she adds. “I’ve been married twice and I never had the wedding I want. The first time was at the Mormon Church with, unfortunately, the wrong person for me. Second time was in front of people who didn’t want us to be married and I was wearing [my prom dress].”

“It meant so much to me to walk in front of people who love and support Justin and I, and I got to pick out whatever dress I wanted to wear and have the party I wanted to have!” she notes. It’s a party that ends with Whitney showing off tricks on one of the three stripper poles she has in her house.

“You’re going to have to watch to see if the pole’s the only thing I like to swing around,” she quips, referencing some rumors that pop up this season surrounding her marriage. Apparently, Lisa Barlow accuses Whitney of being a swinger.

“I don’t want to spoil it or anything, but it’s probably not true,” she says. “I can swing around many things, but my relationship is not one of them.”

Whitney describes Lisa, a New York transplant who owns a variety of liquor businesses, as a “behind-the-scenes pot-stirrer,” though she qualifies that with, “She’s going to deny it.”

“She loves to pull everyone off one on one and manage and be ‘the boss’ of everything, you know?” Whitney says of Lisa. “I think you should be watching out for my relationships with Lisa and Jen [Shah].” 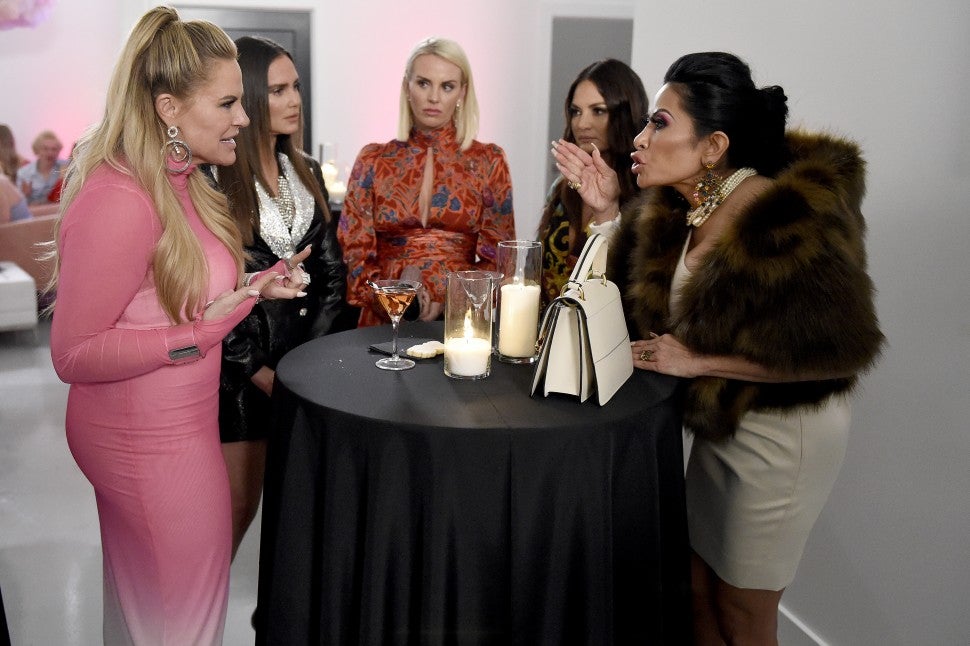 Whitney says the duo is “relentless” when it comes to her, calling Jen an “in your face” pot-stirrer, who isn’t afraid to cause a little drama for drama’s sake. The fashionable marketing executive seems to be involved in pretty much everyone’s business this season, at least judging by teasers.

“She cannot stand to not be the center of attention,” Whitney says of her flashiest co-star. “Jen is a big personality — and I love attention, obviously all six of us do. We’re on a Housewives show — but it’s difficult for Jen when the spotlight moves to other people.”

Whitney claims Jen’s spotlight-seeking behavior left her “disappointed” in Jen this season, while also teasing that Jen is tied up in the “biggest drama” of the season with Mary Cosby, a somewhat mysterious figure whose official Bravo bio shocked the Bravoholic universe when RHOSLC’s casting was announced. Mary is married to her own step-grandfather, an arrangement requested in Mary’s late grandmother’s will.

“She has, as you can imagine, many complex layers,” Whitney says of Mary. “She arrives to the situation a little bit guarded, naturally, so Mary is someone you don’t want to write off. You want to get to know her. So, give Mary a chance and I think she’ll surprise you, because she has so many layers.”

Mary is one of two RHOSLC co-stars with whom Whitney had a relationship with prior to the show; she also knew Heather Gay, who is Whitney’s second cousin, though they actually met as friends prior to learning that information, when Whitney hired Heather as a photographer for a boudoir photo shoot. 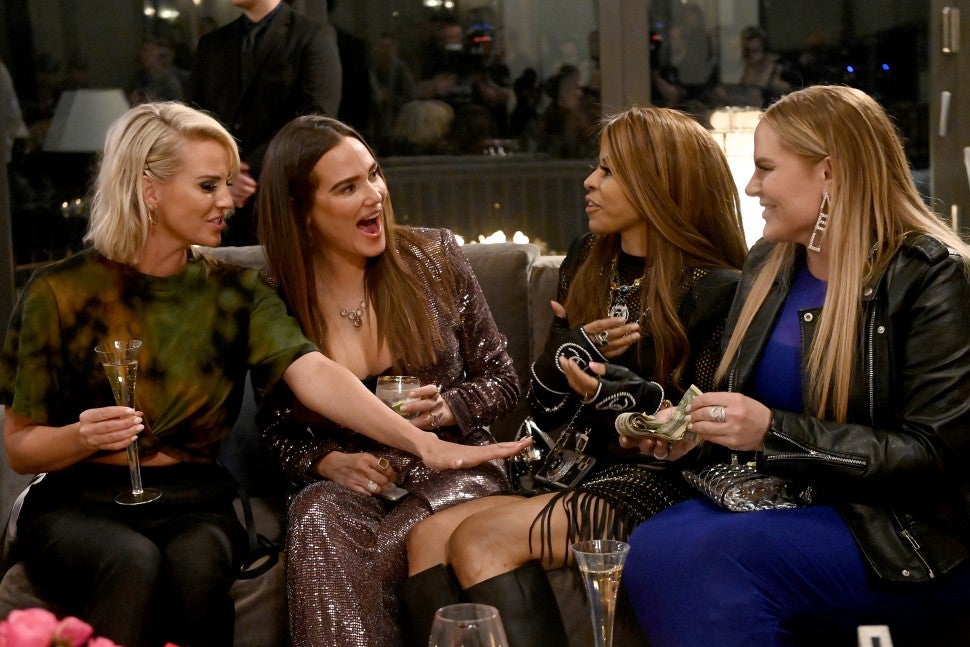 “Heather is the one I can thank for roping me into this crazy world,” she confesses. The women didn’t know they would be making a Real Housewives show when they first met with producers in 2019. At the time, the concept of the series was simply to showcase the “new Utah.” When the show evolved into RHOSLC, Whitney says she exclaimed a “Hell, yes!” because she, herself, is a big Housewives fan.

Bravo announced The Real Housewives of Salt Lake City at BravoCon in November 2019, and shortly after that, Whitney says she made some covert connections with other Bravolebrities to get insight into just how much this show was about to change her life. The Real Housewives of Orange County‘s Braunwyn Windham-Burke and The Real Housewives of Dallas‘ Kary Brittingham both offered words of encouragement, but Whitney credits Vanderpump Rules star Katie Maloney-Schwartz with really shepherding her through this experience. Katie, as well as her Pump Rules castmate, Lala Kent, is a Utah native.

“[She] has been kind of my rock through this,” Whitney admits. “She responds to me right away every time I message her, anytime. There’s as many highs as there’s as many lows, and in those low moments Katie’s given me the best feeling of safety and advice.”

Whitney says Katie’s advice has been pretty simple: look inward and brace yourself for the haters.

“You’re going to be so worried about the fact that the world knows you had an affair, or you got drunk and you threw a glass, whatever it is, but people are going to come after you for, like, the type of bread that you fed your kid,” she shares, revealing the mindset Katie has helped her form.

Whitney’s kids are who she’s most worried about as she enters the realm of public life. She and Justin have a daughter, Bobbi, 10, and a son, Books, 7, and Whitney jokes they have “two strikes against them” in Utah: One, they’re not Mormon and two, their mom’s now a Real Housewife.

On a boat in the ☀️🌊 is our favorite place to be 💙. . . . #hawaii #maui #familyvacations #myhappyplace

“I really worry for my children in the community, because what their friends’ parents maybe now view, or think of Justin and I,” she says. “As wild as I am, as much fun as I have, choices I make, I’m a damn good mother and they’re my first priority. That was my biggest hesitation going into this.”

So far, though, Whitney says she’s been pleasantly surprised by the “amount of excitement” the community has shown over the show. She’s still waiting on the Church’s official review, though.

“It’s going to be seen in both ways, I think, of disgust or dislike, but also if it’s profitable, it might be a good thing for Salt Lake City,” she notes. “As long as we stay respectful — you know, it’s predominantly Mormon here — I think you can be respectful, but be truthful.”

Whitney is bringing her fair share of truth telling to the small screen, thanks in part to her father, Steve, who agreed to share his struggle with drug addiction on camera.

“It’s very raw, very real, helping my dad through sobriety,” she says. “The time that we started filming was right when he decided — he just finished rehab, 30 days of rehab, and getting him to take the next step from rehab to sober living was really, really hard. Very emotional. I can’t even put it into words.”

“You see my dad admitting that he’s an addict and that he needs help,” she continues. “He’s functioning as, like, a 4-year-old, you know? … I’m so proud of him, and sobriety is an everyday thing. It’s not just, ‘You completed this and now you’re done!’ We’re still going through it.”

Whitney hopes sharing the highs and lows of her life will both educate and entertain.

“I hope I surprise everyone,” she says. “I have layers, I’m not just one thing. I don’t fit in a box. I’m a business owner. I’m a wife. I’m a mother. I’m open. I’m a free spirit. I’m constantly evolving and growing. I think the best way to describe Whit is, I’m an experience and I’m experiencing it with you.”