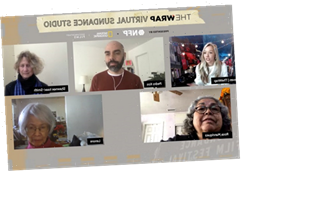 Sundance 2021: In the 60s, the Sisters of the Immaculate Heart fought Catholic orthodoxy to redefine what it means to be a nun

Nearly 60 years ago, the Sisters of the Immaculate Heart dramatically redefined what it means to be a nun in the Catholic Church. Now their story is being told in “Rebel Hearts,” a documentary premiering at Sundance that shows the part these nuns played in the second wave of feminism.

Director Pedro Kos, writer-producer Shawnee Isaac-Smith, and Immaculate Heart Sisters Lenore Navarro Dowling and Rosa Manriquez joined TheWrap’s Sundance Studio sponsored by NFP and National Geographic to discuss the new film, which recounts how Anita Caspary, Mother General of IHM back in the 1960s, fought against the conservative cardinal of the Archdiocese of Los Angeles, James McIntyre, to establish their own college and high school, even dispensing their vows and creating a new organization outside the Catholic Church to continue their mission.

The IHM nuns would continue to break the mold of cloistered life long held as the only form of religious life for women in the Church, participating in civil rights and feminist marches from the March in Selma in 1965 to the Women’s March in 2017 while wearing civilian dress instead of the traditional habits. Today, IHM continues its educational work at the all-girls Immaculate Heart High School and Middle School in Los Angeles.

“Over 20 years ago, I heard about the Immaculate Heart sisters and knew it was an amazing story,” Isaac-Smith said. “They were all very educated, working for social change in every step of their lives, and I was truly inspired by them. I feel that their relevance is just as relevant today as it was back then.”

While Caspary passed away in 2011, she appears in the film along with many of her sisters in interviews that were taken over the course of 20 years. Navarro Dowling was in the IHM leadership when Isaac-Smith first came to the sisters to the project and says that even over the decades during which the film was developed, IHM has continued to evolve in much the same way that it pushed itself and the Church to evolve back in the 60s, when the Second Vatican Council radically changed Catholicism in ways not seen in centuries.

“I think for us, every year is an awakening. We are continuing to evolve with new members and new ministries. But 1970 gave us the opportunity to dress as other people would, to choose our professions, career, vocations,” Navarro Dowling said. “Throughout our community, we were trying to reach out beyond our walls. It was a time to create with our students a community that would respond to the needs of the world.”

Rosa Manriquez, who has been a part of IHM for 30 years, was educated by the Immaculate Heart sisters throughout her childhood and feels that she has been directly impacted by the radical vision of IHM and their refusal to adhere to conservative traditions about what women could do in the Church. Through their example, she was inspired to become an ordained priest in spite of Catholic orthodoxy.

“I was able to witness how women can maintain integrity, can claim their personhood and can be obedient not to structures or institutions but to the Holy Spirit, which is the core of Catholic teaching,” she said. “When I was ordained, I had this incredible community and there were so many members that gave me so much support and love. There is support and love and encouragement to follow the Spirit and to obedient to the Spirit.”

Watch the full interview with the “Rebel Hearts” team in the clip above.

TheWrap’s Sundance Studio is sponsored by NFP and National Geographic.