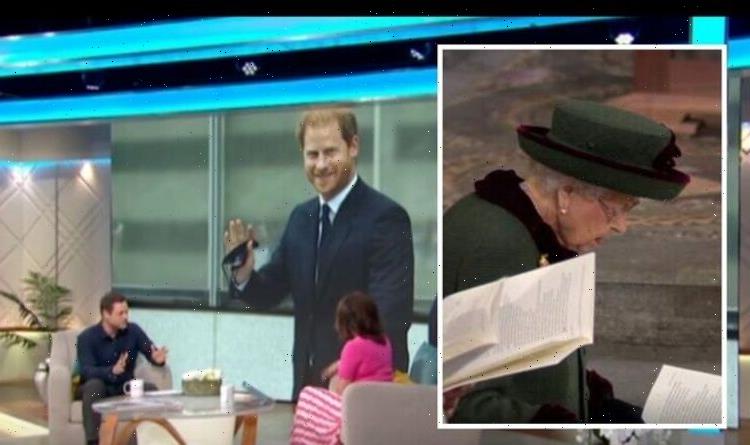 A service of Thanksgiving was held this week to celebrate the life and legacy of Prince Philip. All of the Royal Family were in attendance to support the Queen, with the exception of Prince Harry. Speaking on Lorraine, Russell said this would be a decision the Duke of Sussex would “regret”.

Lorraine Kelly began: “I must admit, up until the very very last minute, I thought ‘Do you know what, maybe Prince Harry will just come over for goodness sake,’ you know?”

“I think he’s going to really regret this, Russell, because he’s not gone because he says he doesn’t feel safe.”

The Scottish presenter didn’t think the event could have been any more secure, as she continued: “For goodness sake, they’re in Westminster Abbey.

“Can you imagine how many Beefeaters and SAS and people are in there looking after the Queen?”

Read More: ‘Not going to take his Oscar!’ Whoopi Goldberg defends Will Smith ‘people will beat you’

“It just seems a shame,” she concluded.

Russell replied: “Well, that isn’t the only thing because, in a couple of weeks, he was going to be in the Netherlands for the Invictus games, a fantastic event that he has been putting on for many years.”

“But is he safer there than Westminster Abbey?” Lorraine asked.

Russell continued: “Well again, this is the issue.

“He would have been afforded security had he come over for a big family event.

“He’s put himself into a difficult position because of this row with the Home Office about his taxpayer-funded security, which has been taken away.

“He wasn’t necessarily prepared to bring his private funded security over to the UK. So yeah, it’s a big issue for him.”

Russell continued: “I think he will live to regret that decision because a lot of the family were rallying around the Queen.

“You look at the pictures and images yesterday, she looked absolutely grief-stricken.

“You go back to the funeral, only 30 mourners, the enduring image for the coronavirus crisis for me was her sitting on her own.”

Lorraine agreed, simply commenting: “Me too.”

Prince Harry was last in the country in the summer of 2021 for the unveiling of Princess Diana’s memorial statue.

It wasn’t just Prince Harry who Lorraine wasn’t impressed with as she also questioned Prince Andrew’s role in the memorial service.

The Duke of York accompanied his mother into Westminster Abbey and Lorraine remarked: “It’s his father and nobody is saying he shouldn’t be there but she’s got two other sons and also she has a daughter.

“I think it would have been rather lovely if Princess Anne, Princess Royal came down with her.”

Lorraine airs weekdays at 9am on ITV.