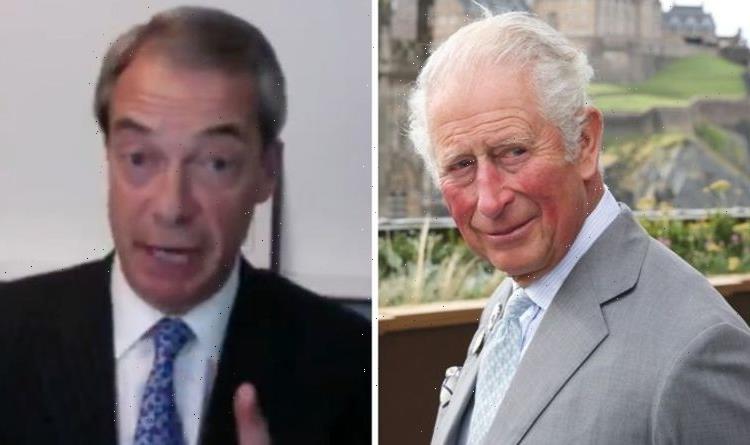 Former UKIP leader Nigel Farage joined Dan Wootton on GB News on Tuesday evening where he claimed Prince Charles has the power to destroy the Royal Family with his statements on “eco-alarmism”. Following Charles’ supportive remarks toward Insulate Britain, Farage told presenter Wootton, his support of the group could mark the end of the monarchy.

The activist group have stirred up controversy with reckless tactics, though their cause has won the support of the Prince of Wales.

Charles criticised their strategy of disrupting motorways, but Farage felt he had spoken in complete support of the group.

“I did read out the clauses in the 2000 Terrorism Act, which suggest to me these people aren’t just a nuisance, they’re operating in a terrorist-like manner.”

The ex-UKIP and Brexit leader said the group were prepared for people to die following reports their protests had prevented ambulances from getting to hospital.

He then vented frustration in Prince Charles’ comments in support of their cause.

The GBN presenter suggested his environmental campaigning could counteract what Queen Elizabeth II has contributed to the monarchy.

“The heir to the throne is once again dabbling in eco-loony politics,” he said.

Farage recalled a dispute in the European Parliament after Charles claimed the EU needed more power to prevent the North Pole from melting.

Arctic sea ice continues to decline at around 13 percent per decade, though Farage retorted: “Well, it’s still there Charlie boy.”

“Through stupid, thoughtless statements based on eco-alarmism.”

He also appealed to his co-presenter, Wootton, originally from Commonwealth country New Zealand.

As Queen Elizabeth is still Head of State in 14 countries, Farage insisted the monarchy was Britain’s “USP with the world”.

“This gets us to half the world’s population. It’s important, it matters,” Farage stated.

Wootton agreed: “Leave the environmental extremism to Greta Thunberg, Charles, because you have got to maintain the sanctity of the Royal Family.”

“Shut up, Charles. Just shut up, stop talking so much,” exclaimed Farage.

“We don’t want you dabbling in politics, be dignified like your mother. Can you do it at the age of 72, will you finally grow up?”

Wootton clearly didn’t think so as he replied “he can’t” to bring the section to a close.

GB News begins with the Great British Breakfast on weekdays at 6am.