Aided by a dynamite performance from newcomer Laura Galán, “Piggy” uses the tension of a slasher thriller to weave a painfully relatable tale of adolescent angst gone terribly awry. As body shame and self-loathing morph into a disturbing complicity with violence, “Piggy” pushes the torments of youth to their naturally wicked ends. The film’s most brilliant trick is to mire the audience in the twisted moral dilemma with which its protagonist is grappling, taunting us with the question: What would you have done differently?

Loading its resonant title with double meaning, “Piggy” opens in a butcher shop. The opening frames include a whole pig hanging from a meat hook; the thwack of a cleaver on bone; and the springy bounce of deep purple blood sausage. Sara (Galán) sucks on a strand of her curly dark hair as she studies at the counter, her homework dappled with pig’s blood. Through the window of her family’s shop, she observes a group of carefree teens flirting playfully in the summer heat, so at ease in their lithe young bodies. She stands at crisp attention when two of the girls enter the shop to pick up an order, the air heavy with unspoken familiarity.

In this brief opening scene, a few knowing glances explain a lifetime of setup. Sara’s former friend Claudia (Irene Ferreiro) only hangs with the popular girls now, who taunt Sara about her weight with cruel names like “piggy” and “Miss Bacon,” unbeknownst to Sara’s nosy but clueless parents (Carmen Machi and Julián Valcárcel). One of the mean girls posts a quick family photo in the butcher shop to Instagram with the caption “Three Little Piggies.” 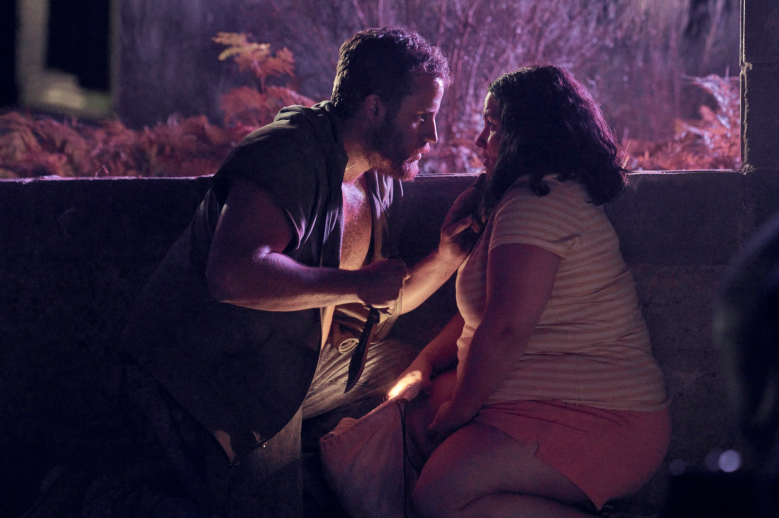 Flustered from the cruel interaction, Sara heads to the town pool to cool off, hardly noticing the eerily empty public park. She’s entirely alone except for a hulking man who bursts from the water, locking Sara into some seriously penetrating eye contact. The moment is cut short by the trio of mean girls, who nearly drown Sara by assaulting her with a pool net before taking off with her towel and belongings.

Ashamed and hurt, she cries all the way home, trying but failing to cover up her exposed body. Along the way, she stumbles upon her tormentors trapped in the back of a white van, waving bloody hands and crying for help. When the man from the pool opens the door and gently places a towel on the ground, she says nothing and lets him drive off. From that moment, it’s a race to the finish as Sara becomes embroiled in an agonizing game of what she will and won’t say. Once the lifeguard’s body is found in the pool, she becomes the target of questions from local police and frantic mothers looking for their daughters.

Pereda adorns the film with visceral clues to Sara’s physical state; her skin is crispy pink with sunburn after her long walk home, and blue residue clings to her lips as she anxiously sucks down a lollipop. She films the bullying scene at the pool with claustrophobic intimacy, casting the pool net around the camera to inhabit Sara’s direct point of view as she flails for air. Rita Noriega’s clever cinematography and David Pelegrín’s sharp editing work beautifully together to reveal Sara’s mindset without dialogue having to explain much.

Being a Spanish filmmaker, Pereda throws in a fun surrealist touch with the appearance of a young bull on the loose, escaped from a local bullfight. A police dog also barks at Sara every time she passes the precinct. The line between animal and human blurs as Sara’s search for the killer forces her to confront her demons and her basest survival instincts. When they finally come to blows, rolling around in the dry mud of an empty slaughterhouse, Sara and her mystery man exchange guttural groans from the depths of some primal place.

The whole film hangs on Galán, who delivers a forcefully transformative performance as only a fresh face can. Fully embodying her harrowing anti-heroine journey, Galán earns the bloody resolve of a prizefighter who, after summoning an inner force that shocked even her, will never be the same. And neither will you.

“Piggy” is currently playing in select theaters and VOD.