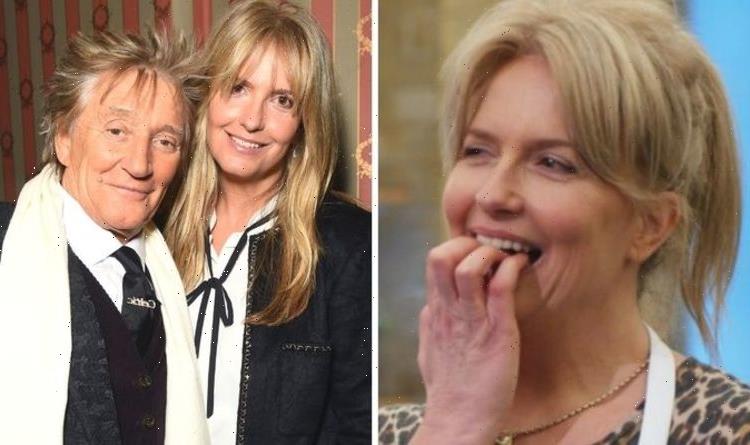 Penny Lancaster is one of the latest contestants taking part in this year’s Celebrity MasterChef. The TV presenter put her cooking skills to the test during Monday night’s BBC instalment along with Melanie Sykes, Megan McKenna, Patrick Grant and BGT star Nabil Abdulrashid. BBC hosts John Torode and Gregg Wallace put the celebs through their paces as they faced three cooking challenges. However, just moments into the programme, Penny wasted no time in poking fun at her rock star husband.

Before they began their first cooking task, Penny joked in the VT: “I am here to get out of homeschooling.

“I was looking for an escape,” the Loose Women star added.

She later took aim at her other half: “I like to take on a challenge, that’s why I married my husband.

“There’s one thing to be able to prepare a dish and thinking ‘Okay, I’ve got this’, like a rehearsal.

“But there is no rehearsal, just good luck and give it a go.”

For the first challenge, each of the celebs were given a different ingredient each and with that ingredient, they had to come up with a creative dish.

“Welcome to Masterchef,” Gregg began. “We want you to be as good as you possibly can because we have to eat it.”

John chipped in: “For your first test which we call Under the Cloche.

“Underneath your Cloche you all have a different ingredient, we would like you to make a dish showcasing your individual ingredient.”

As Penny unveiled her ingredient, she didn’t look impressed when she discovered she had to come up with a dish using only lemons as the main ingredient.

“They’re beautiful lemons,” she told the chefs. “Thank you.”

John added: “You have to showcase your ingredient using anything you like from this larder behind us.”

“I’ve made a dish with lemon, but this has to actually be predominantly lemons,” the former model commented.

“I’m at a loss really,” she admitted.

Despite the rocky start, Penny decided to make a fish dish using the lemons.

However, when it came to the taste test, Gregg didn’t seem too impressed as he told her the fish was overcooked.

During the second task, the stars were given a popular street food dish from Vietnam. They then had to taste the dish and work out how to make it themselves.

The third and final challenge the celebrities were given was to make a suitable meal for a dinner party.

When it came to making their decision, John and Gregg decided to send home Patrick.

BBC viewers were delighted to see Penny had survived the cut, with many taking to social media to share their thoughts.

One fan penned: “It’s got to be said that Penny Lancaster is absolutely delightful.”

Another joked: “I love Penny Lancaster’s honesty. ‘I don’t cook for dinner parties; I have a chef’.”

“Isn’t Penny Lancaster just the sweetest, loveliest person? She comes across so well,” a fourth tweeted.

Celebrity Masterchef returns on Tuesday at 9pm on BBC One.