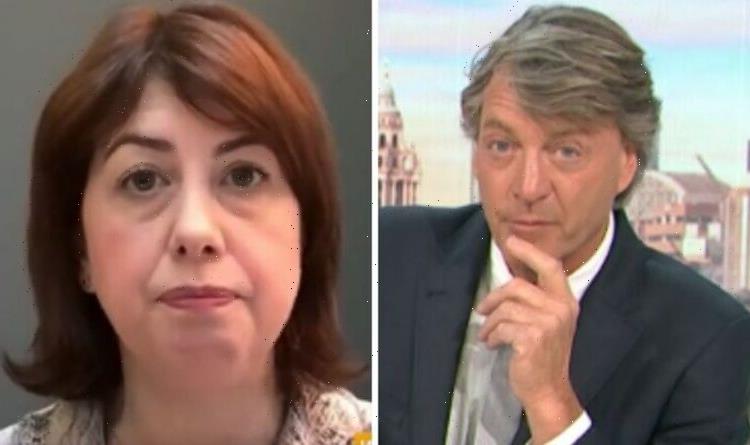 Good Morning Britain viewers were left fuming on Wednesday as Richard Madeley and Kate Garraway interviewed Shadow Culture Secretary Lucy Powell. The ITV hosts asked the MP why the UK hadn’t enforced tougher sanctions against Russia yet. However, as the interview came to a close, Madeley asked Powell whether she would be watching the UN’s security council discussion in Bucha at 5pm.

“Just very quickly, will you be sitting in front of the television at five o’clock to watch this historic moment in the UN?” Madeley asked.

The Labour MP was quick to hit back: “If I can juggle that around making my children’s tea and all my various childcare demands, as usual, I will.”

Madeley replied: “There speaks a working woman! Alright, thanks very much indeed.”

The TV host’s “working woman” comment sparked fury among viewers and many took to social media to air their frustrations.

User @selexiak fumed: “#gmb Madeley: ‘there speaks a working woman’ followed by self-congratulatory smile because he doesn’t even realise he’s been so patronising.”

While user @domain_harry added: “‘There speaks a working woman nothing patronising there Richard #gmb.” (sic)

Elsewhere in the chat, Garraway quizzed Powell on why the UK hasn’t acted sooner in helping Ukraine.

She went on to ask why there hasn’t been more military support including tanks and missiles.

The MP agreed with the host as she replied: “You’re absolutely right, Kate, it’s appalling. The atrocities we are seeing unfolding day in and day out.

“The criminal actions of the Russian army, it is truly appalling and none of us thought we would see this in this day and age.”

“We have been calling for those loopholes to be closed down long before this atrocity began to unfold and we also support much more military aid.

“The UK government, we have been pretty good on that but we think that could go further and faster as well.”

This is the second time Richard Madeley has caused a backlash from GMB viewers this week.

On Monday, Madeley faced criticism when he asked US central command, Chip Chapman, how rape was used as a weapon of war.

His remark came as they discussed the claims, that the Russian army was using rape as a weapon in Ukraine.

“It’s trying to impose some sort of will on the enemy as I mentioned in Second World War times,” Chapman explained to the host.

“It is absolutely horrific and if you’ve got compromised morality and unchecked par with those with weapons you have a lethal combination of the future.”