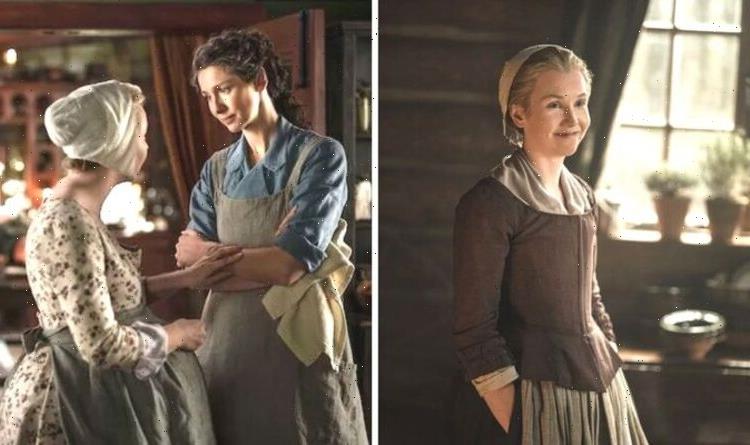 With viewers two weeks into season six, things took a dramatic turn on the recent episode titled ‘Allegiance’ when Marsali Fraser (played by Lauren Lyle) went into labour during dinner.

Although she had spent the majority of season five pregnant, by the finale she was carrying her fourth child.

Claire Fraser (Caitriona Balfe), a World War II nurse who had time-travelled and stayed in the past, assisted Marsali in what she predicted wouldn’t be an easy birth.

The labour had got so intense, at one point Claire told her husband Jamie Fraser (Sam Heughan) the young mother might not make it.

Which prompted him to drag Marsali’s absent husband Fergus Fraser (Cesar Domboy) from the distillery to be beside his wife.

Later on, Marsali birthed a son and as Fergus cradled the newborn his smile soon disappeared when he looked down.

He quickly got up, shoved the child in Claire’s arms and ran out the room in sheer panic.

Fergus revealed what the problem was before he left when he whispered the word “nain” which was French for Dwarf.

Claire explained to Marsali, her son was completely healthy and just had dwarfism.

However, trouble could be on the horizon for the parents as in those days having a child born with a condition was believed to be a curse.

Locals including adults and children would be convinced the child was punishment for his parent’s sin.

Elsewhere, Marsali and Fergus could be accused of witchcraft as a result of their son’s dwarfism, especially after Claire who was at the centre of those accusations had delivered their child.

After the tense episode, actress Lauren took to Instagram and dedicated a post on her stories to Claire Fraser star Caitriona Balfe.

Sharing a selfie of the two on set and in costume, she wrote: “Thank you to the best co-star (next to the wig) [Caitriona Balfe] for getting down and dirty with me this episode.”

Although Marsali and Fergus’ relationship appears to have hit new challenges, executive producer Maril Davis shared it wouldn’t be the end for them.

Speaking to TheWrap ahead of the premiere, Davis shared: “I think we’re going to see an amazing arc for them [Fergus and Marsali] and see they’re such a strong partnership.

“But I think this is the first time we’ve seen them at odds and not communicating, not talking to each other.

“So we’ll see this great kind of arc for them to see how they get through this and where they go.”

Viewers will have to stay tuned to see how the couple deal with their new challenges as well as backlash from locals.