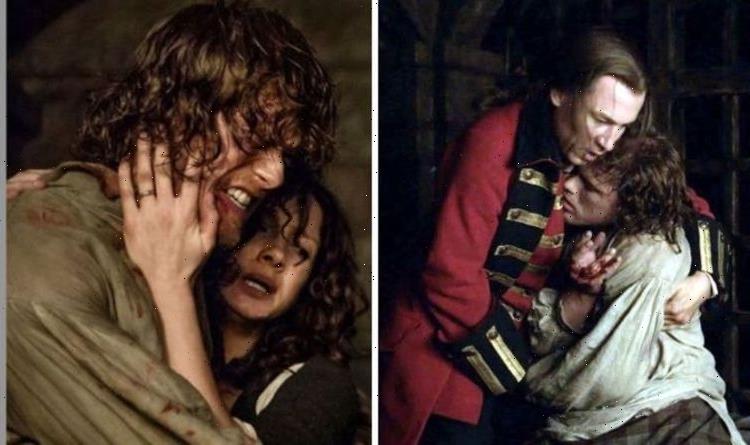 After a hit season four to the historical drama, fans can expect the upcoming season of Outlander to premiere on Starz in early 2022. However, viewers who were re-watching the series exposed a major inconsistency from season one, which highlighted a plot-hole with Jamie Fraser’s (played by Sam Heughan) tortured hand.

In season one, Claire Fraser (Caitriona Balfe) had discovered that she could time travel back to the 18th century.

There she met Jamie and the two hit it off and eventually got married.

Before they reached the altar, the two went through a ton of hardships as they were both in hiding.

Claire was wanted by the Black Jack Randall (Tobias Menzies) because she was English and had initially confused him for her husband from the future.

Whereas Jamie was hiding because he was wanted for a crime he didn’t commit after a soldier turned up dead.

Eventually, he was caught and sentenced to death after being captured by the Redcoats.

In the final two episodes of season one, Jamie was in Wentworth Prison and brutally tortured by Black Jack Randall.

This is the scene where an observant fan noticed a major inconsistency with his punishments.

After receiving a flogging at Fort Wilson, Jamie was able to escape after a soldier that was sent to beat him suffered a heart attack.

When he was found dead, this caused him to be wanted for the death, even though he didn’t do it.

However before Claire and the Highlanders hatched up a plan to rescue Jamie, he was beaten and brutalised.

As he was awaiting his death, his captor completely mangled his hand, but fans couldn’t help but notice the inconsistency.

Taking to screenrant.com, the viewer shared: “Over the course of multiple scenes, the injured hand goes from severely damaged to just covered in blood.”

This is likely to have happened as actor Sam Heughan would’ve been occasionally swapping a fake hand for his real hand.

Later on, Claire attempted to free Jamie by breaking into the prison but was later caught by the sadistic Black Jack Randall.

He had previously made sexual remarks about Jamie and the only way to save himself from hanging was if he allowed Black Jack Randall to rape him.

In the brutal scene, he nailed Jamie’s hand to a table and rather than getting it over and down with, he took his time – torturing him that way.

As Claire had been caught by him, Jamie also agreed to the assault to free her.

Throughout the ordeal, he screamed in pain and later vomited due to the trauma, while Black Jack made the sickening statement: “Jamie, I just want this to be a pleasant experience for us both.”

Outlander is the on-screen adaptation of the best-selling novel series written by Diana Gabaldon.

Outlander season six will premiere early 2022 on Starz in the USA and air on Amazon Prime Video in the UK.