Love stories on TV are hard, as has been observed many times in the past, because in the very long run, it’s hard for a romance to have a happy ending. Any first kiss implies that there is also a last kiss; whether it be separation or death, the idea of “together forever” is a hard one to pull off. Thus, the struggle for shows like “Outlander,” which just aired its Season 4 finale, a season which was grounded in the reunion of its central hero and heroine, but also felt the need to develop a new passion.

[Editor’s note: The following contains spoilers for the “Outlander” Season 4 finale, “Man of Worth.”]

The Starz time travel drama, created by Ronald D. Moore and based on the books by Diana Gabaldon, began as the story of Claire (Caitriona Balfe), a woman from the 1940s unexpectedly whisked back to the 1700s, where despite being married to a man from her own era, ended up falling in love with Jamie (Sam Heughan), a dashing Highlander. The subsequent seasons have seen them battle out the normal sort of struggles faced by any normal couple, along with a dramatic separation and an equally dramatic reunion across both space and time, with the grindstone of history serving to complicate an already pretty complicated relationship.

However, in Season 4, the relationship between Jamie and Claire is no longer a major source of conflict for the characters; the pair has, after years both together and apart, come to a state of sympatico (with the occasional flair-up of one or both’s tempers).

But because the engine of “Outlander” is in part dependent on some level of romantic tension, enter their daughter Brianna (Sophie Skelton) and Roger (Richard Rankin), the sweet-natured historian introduced in Season 3 who helps Claire and Brianna discover Jamie in the annals of history, and then gets caught up in their time travel adventures himself. In Season 3, it’s clear that Brianna and Roger are fond of each other, but it’s Season 4 which escalates their romance. 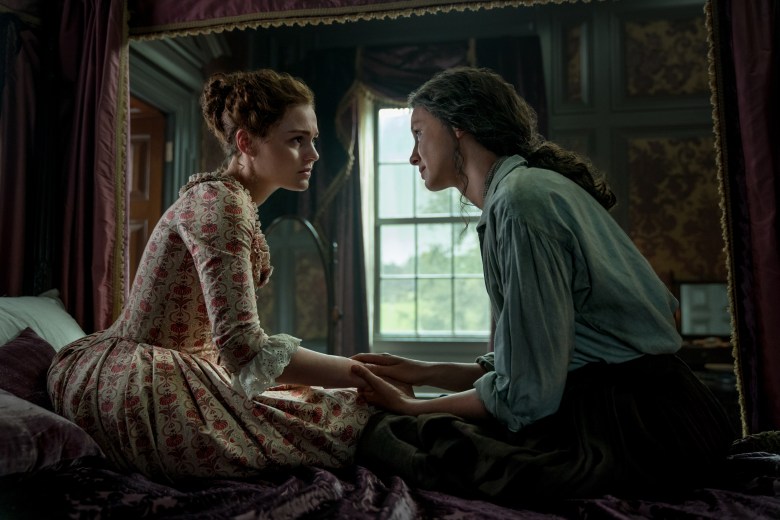 There’s a lot going on in Season 4 beyond Brianna and Roger struggling to find their way to each other, both logistically and emotionally. Jamie and Claire, having landed in America at the end of Season 3, are trying to build a new life together in a new world, and America in the late 1770s is needless to say a pretty interesting time to be around. Between settling their own land and contending with issues like slavery and the treatment of Native Americans, they keep pretty busy — even before Brianna decides to travel back to this era, and reunite with her parents.

This leads Roger to also travel back, even though the pair had separated on awkward terms in their original time period, and the pair manages to reunite for just long enough to consummate their relationship… Until Roger once again puts his foot in his mouth.

The problem that occurs across the season is most of what keeps Brianna and Roger separated can largely be chalked up to the show’s characters, frankly, being pretty dumb. The miscommunications not just between them, but between everyone in connection to them, are essentially what the last half of the season relies upon to drive their storyline.

The one plot element which isn’t related to people not being able to talk clearly to each other is also the season’s most dramatic twist: the rape of Brianna by Stephen Bonnet (Ed Speleers), leaving her uncertain as to who the biological father of her child is, may be something which originated in Gabaldon’s books but felt gratuitous in this context. While Brianna and Roger miscommunicating might not be that compelling as a source of story conflict, adding in a rape storyline (one which was pretty brutal in its execution) is not a solution to that problem. One of the reasons why Will They/Won’t They romances are so much more popular on television than thoughtful, mature takes on partnership is that the latter is harder to keep interesting. (It’s understandable that more creators avoid it, if only because trying to compete with “The Americans” for the title of TV’s Most Interesting On-Screen Marriage feels like a losing fight.) But the reasons for Won’t They have to be as compelling as Will They, and that is sadly a bar that “Outlander” failed to clear with Season 4.

The more that “Outlander” has matured into a show that’s about issues beyond romance (while never shortchanging the passion of those relationships), the more fascinating it’s become. But in the season finale, too much of the dramatic build-up had to do with Roger going back-and-forth on whether he should be with Brianna, and while Roger and Brianna aren’t bad characters, the only way this back-and-forth would have been more annoying is if it

Season 4 ends with the twist that Jamie has been called up to try to track down his beloved Murtaugh — a conflict that has nothing to do with the show’s various romances, which is honestly good news. “Outlander” has always found its footing as a drama thanks to developing the non-romantic elements of its storylines, and the success of Season 5 will depend on that continuing.