Starz drama Outlander is off-season as the cast and crew prepare to start working on the upcoming sixth series. The next instalment will be taking its cue from Diana Gabaldon’s novel A Breath of Snow and Ashes but due to the uncertainty of the coronavirus pandemic, it’s unclear when the new series will be out. Consequently, some fans have been re-visiting previous seasons of the show as they wait for the new episodes.

Why did Jamie Fraser lie to Claire about Laoghaire marriage?

Season three of Outlander is perhaps one of the most expansive runs of the historical romance series given it covers Jamie (played by Sam Heughan) and Claire Fraser’s (Caitriona Balfe) 20-year separation.

The first half of the series concentrated on Claire and Jamie’s separate lives as they tried to survive without the other, experiencing much heartache along the way.

While Claire languished in an unhappy marriage with her first husband Frank Randall (Tobias Menzies) and raised Brianna (Sophie Skelton) with him, Jamie faced his own series of trials and tribulations.

Jamie became a fugitive for seven years after the Battle of Culloden, before serving time as a Jacobite at Ardsmuir Prison, and finally was released to work in England as an indentured servant. 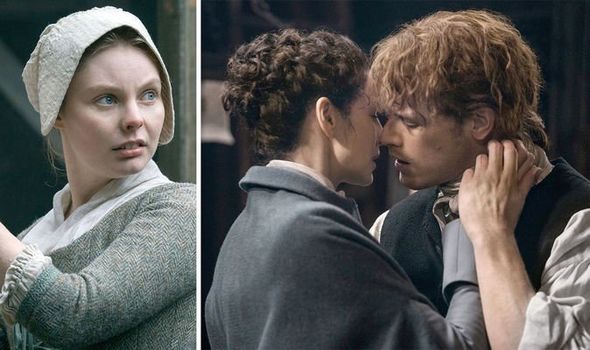 We will use your email address only for sending you newsletters. Please see our Privacy Notice for details of your data protection rights. Outlander season 6: Stars share sneak peak at the show’s wardrobe

When he returned to Scotland, he was still broken and at the behest of his sister Jenny Murray (Laura Donnelly) married Laoghaire MacKenzie (Nell Hudson).

The union didn’t last though with problems between Jamie and Laoghaire with the pair living separately.

Jamie was working as a printer in Edinburgh, publishing potentially seditious pamphlets while Laoghaire lived in Lallybroch.

This was where Claire found him when she travelled back to the past with the pair quickly rekindling their passionate romance as if a day hadn’t passed.

Although Jamie was honest about the son Willie he’d fathered during his time at Helwater, he held back when it came to his second marriage to Laoghaire.

Unfortunately, Claire only discovered the truth when Laoghaire turned up unexpectedly at Lallybroch with her daughters in tow.

Claire was left distraught by Jamie’s betrayal and withholding such a huge part of his life from her, telling him she needed some time alone to process it all.

The producers of Outlander have spoken about why Jamie held back with Toni Graphia saying: “We had the biggest debate of the year about where to play this secret about Laoghaire because some people in the room felt that Jamie’s an honourable guy.

“He would tell her right when she came back? Like, why does he hold it back from her?”

Fellow producer Matthew B. Roberts explained: “But it makes perfect sense not to say right away because this dream falls out of the sky and you’re not going to say anything in the first couple of minutes or the first 24 hours. You’re just getting your footing.”

He went on to say how the writers were planning to “parse out” the big reveal about Laoghaire but admitted it didn’t work out.

Graphia went on to say: “Well, he held this big secret from her because we really felt that he could not risk losing the woman that had come back to him, the love of his life after 20 years by hitting her in the face with this big [revelation] right when she comes back.

“She would have over-reacted to it. So he just wanted to wait. You can tell if you watch.

“You can tell something troubling him and he tries a few times to broach the subject. But now it all comes out.”

Graphia added on the Outlander season three DVD: “I think Claire always knew there was a possibility that he had married someone else or had had other relationships but the fact that it was Laoghaire.”

From the sounds of it, Jamie was simply waiting for the right moment to tell Claire all and was terrified of losing her again.

His fears were justified to a degree after Claire was left shocked by the revelation but their love ultimately won out and they were able to move past this.