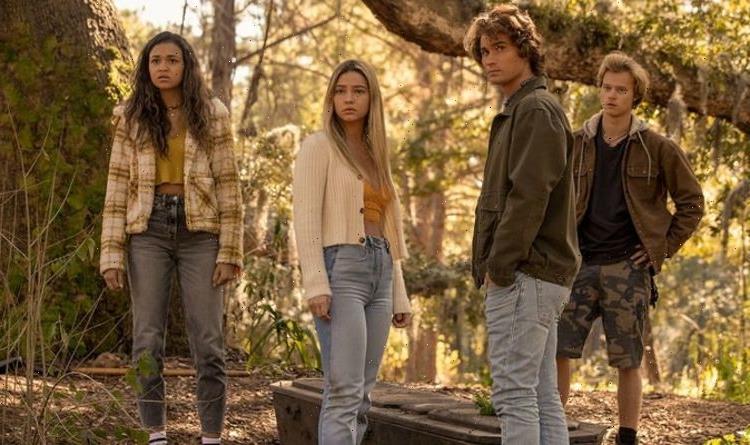 Outer Banks season two will be arriving on Netflix on July 30 and fans are keen to know what happened to the Pogues. At the end of the first season, John B (played by Chase Stokes) and Sarah Cameron (Madelyn Cline) were rescued by a boat crew after they were presumed dead. Express.co.uk has all you need to know about where and when season two takes place.

Where is Outer Banks season 2 set?

The second season of Outer Banks picks up immediately after the events of the traumatic first season.

John B and Sarah were rescued by a boat following the terrible storm and they were on their way to the Bahamas.

They are now fugitives on the run as Ward Cameron (Charles Esten) blamed John B for the death of Sheriff Peterkin (Adina Porter).

Meanwhile, back home, Kiara (Madison Bailey), Pope (Jonathan Daviss) and JJ (Rudy Pankow) are trying to prove John B innocent even though they thought he was dead.

John B and Sarah have one thing in mind – to track down the gold Ward stole and keep out of view.

For the rest of the Pogues, they have their own challenges to deal with as Kiara continues to clash with her parents.

They have always been against her Pogue way of life and wish she would forget about her troublesome friends.

Meanwhile, a shocking revelation puts Pope centre-stage for this second outing, and fans will be excited to see him in the spotlight.

The series is set in two different locations – the Bahamas and Outer Banks, as the gang remains separated.

Where is Outer Banks season 2 filmed?

Filming for the series actually takes place in Charleston, South Carolina, despite the show’s title.

The creators of the series had hoped to film in Wilmington, in the north, but decided against it due to legislative reasons.

Filming began at the end of August 2020 and wrapped in April 2021, with the cast confirming the final day of filming.

Topper actor Austin North posted on Instagram: “Wow, we have officially wrapped s2 of @obx Who’s ready to see it?!”

Stokes also shared an emotional message on Instagram, saying: “It’s hard to put into words how crazy this year has been, but I’ll do my best.

“I don’t think there is ever a level of comprehension for feeling as much love from the entire world as this show has brought.

“To be with a group of people with nothing to lose and gain so much joy from this.

“To have people fall in love with the world. To embrace characters who have flaws, and find a way to follow them is so unbelievably gratifying.

“So with that being said. Thank you.. have tears in my eyes writing this.

“I can’t wait for the world to come back to normal and meet you beautiful people face to face and thank you for all of your love.

“This is for the dreamers, the kids who didn’t fit in. For those looking for an adventure, for those who want to get lost, and just go with the flow.

“1 year of @obx P4L. Let’s keep groovin? Ok love u guys.” [sic] Once again the cast were seen in Charleston as they wrapped on the second season.

A trailer for the second season has been released and it shows John B and Sarah escaping the police.

Pope is also seen discovering a key that could be a way out for John B and Sarah and could lead them back to the treasure.