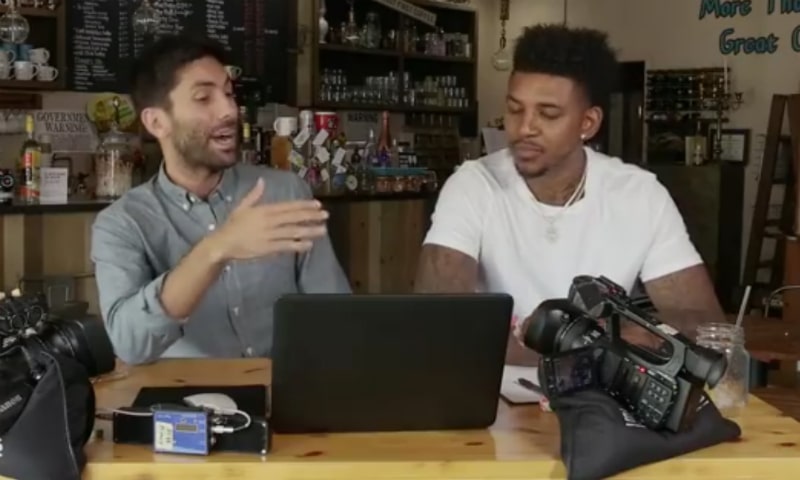 Nev Schulman is getting some help from a professional NBA player, Nick Young, for tonight’s episode of Catfish: The TV Show. Young has played in the NBA for 11 seasons and this week, he was signed to the Denver Nuggets, according to CBS Sports.

Since last season, Young has been a free agent, which explains why he was able to film an episode of Catfish: The TV Show. Plus, he hints that he has time to film more episodes with Nev, joking that he will help Nev with his wardrobe and going from co-host to simply just the host of the show. Watch the clip below.

Nick Young, who is also known as Swaggy P, was first drafted into the NBA back in 2007, starting his basketball career with the Washington Wizards.  Since leaving his first team, Young has played with the Los Angeles Clippers, Philadelphia 76ers and Los Angeles Lakers before heading to the Golden State Warriors where he won an NBA championship in 2018.

He has been with the Denver Nuggets since December 10 of this year.

His salary for this year alone is listed at $1,042,584 on ESPN. He also became the subject of a documentary movie from 2007 called Second Chance Season. The movie documents his last year of high school as he tries to impress college recruiters.

In terms of Nick Young’s personal life, he dated Iggy Azalea a few years ago. The two got engaged in mid-2015, but Azalea revealed she had ended the engagement after catching Nick bringing women into their shared home while she was away.

Iggy shared the breakup news on Twitter after browsing through her home-security footage. They dated for two years.

She was also heartbroken to learn that Nick was having a second child with his ex-lover, Keonna Green. The two already had a child together, 4-year-old Nick Jr, at the time of their relationship. Back in mid-2016, Green confirmed she was pregnant with a baby girl and she was convinced that Young was the father.

In October 2016, Nick Young became a dad again, welcoming his daughter Navi Young, into the world. While it’s not clear exactly where Young’s relationship with Keonna Green stands today, they did hit the red carpet together back in June for the first time since the cheating scandal for the 2018 NBA Awards Show.

Catfish: The TV Show airs Wednesday at 9/8c on MTV.