‘BBC Breakfast’ remains a popular start to many Britons’ morning routine as they eagerly tune-in to catch the day’s news, interviews and weather forecasts. But the flagship show suffered an embarrassing gaffe when Nicola Sturgeon was unintentionally compared to a gorilla. The TV blunder left Charlie Stayt red-faced and apologetic, meanwhile Naga Munchetty seemed a little less remorseful about the unfortunate error.

As the presenters momentarily paused before announcing the day’s top stories everything appeared normal in BBC studios – but soon an embarrassing mistake was about to unfold upon British TV screens.

Naga kickstarted the bulletin as she read the show’s leading headline, only for the wrong footage to be played on-screen on October 14, 2016.

She revealed: “We’re going to be joined by the Scottish First Minister Nicola Sturgeon.

“We’ll talk to her about plans for a second referendum on independence.” 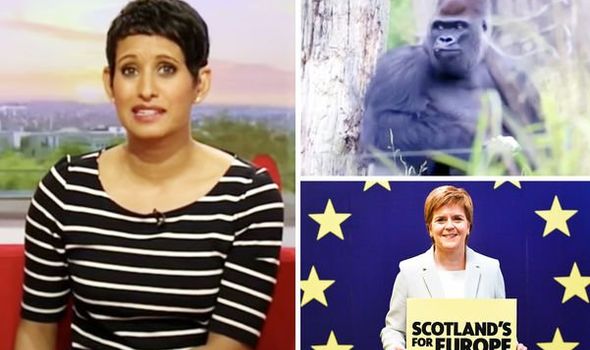 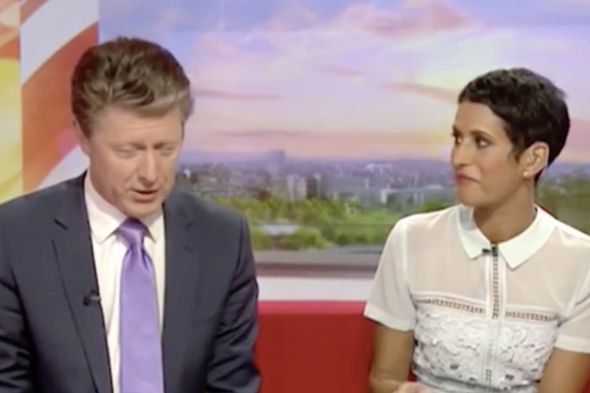 But instead of a video showing the politician or Scotland, footage of Kumbuka – the 29-stone gorilla who smashed his way out of a London Zoo enclosure – was broadcast instead.

The clip showed the large dark-furred mammal back ‘behind bars’ and slowly eating its way through a food offering after its great escape the day before.

After several seconds they cut back to the studio where a flustered Charlie apologised for the interruption and his colleague seemed not to have noticed.

He said: “I’m sorry we’ve very clearly run the wrong pictures over that particular sequence. My apologies there.” 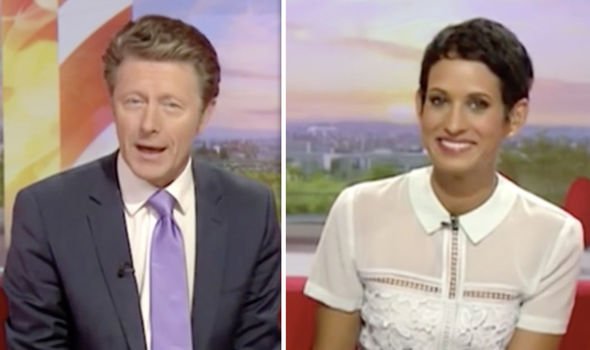 As his look of shock turned into a slight smirk, his eye caught Naga who struggled to contain her laughter and stared at the ground before she let out a few silent giggles.

Charlie continued: “The story we will be talking about later, as you’ve probably guessed from the pictures, is about the escaped gorilla at London Zoo.

“We will be speaking to one of the gorilla keepers from the zoo.”

Later they explained how the 18-year-old silverback managed to break glass from its enclosure and roam around the attraction for 90 minutes.

The “terrifying” ordeal forced park officials to lock visitors in a section of the zoo to ensure their safety while the animal was tracked and later sedated by staff.

In November 2019, PETA reported that the animal died at the age of 21 after he suffered a widespread infection that was noticed after he stopped eating and became sluggish.