And this year, the festive season has added poignancy for the Canadian singer — who returned to music after thinking he would never make another record again. 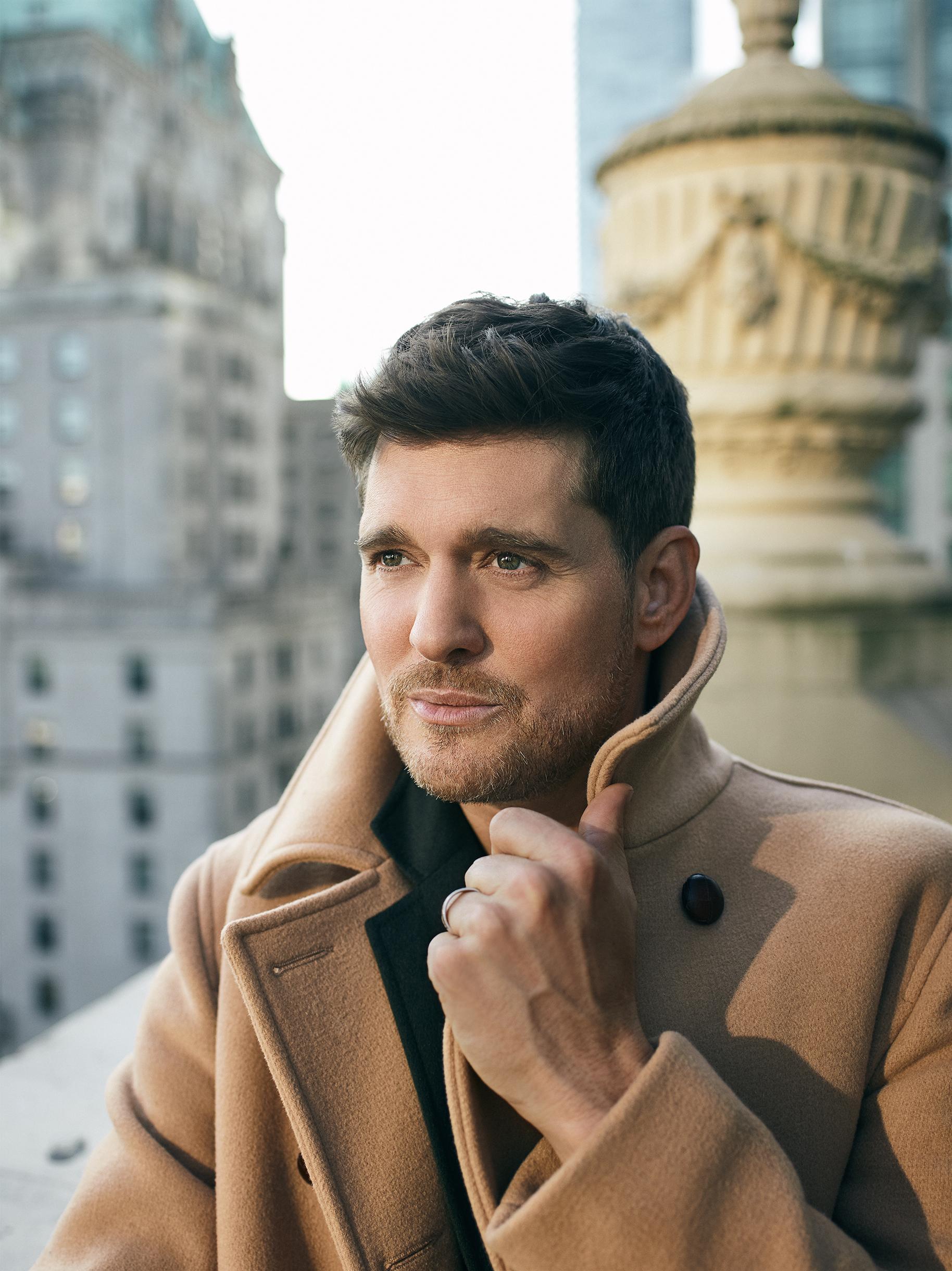 His album Love is the result of some of the 43-year-old singer’s darkest times.

He says: “I didn’t know if I was ready or not to come back. I never fell out of love with music. It’s just that with everything I went through, I had to put everything aside.”

Two years ago his world came crashing down when his eldest son Noah, then three, was diagnosed with liver cancer hepatoblastoma.

Bublé and his wife Luisana Lopilato — who also have a son Elias, two, and new daughter Vida Amber Betty, born in July — retreated from the limelight as they focused on caring for their poorly son. 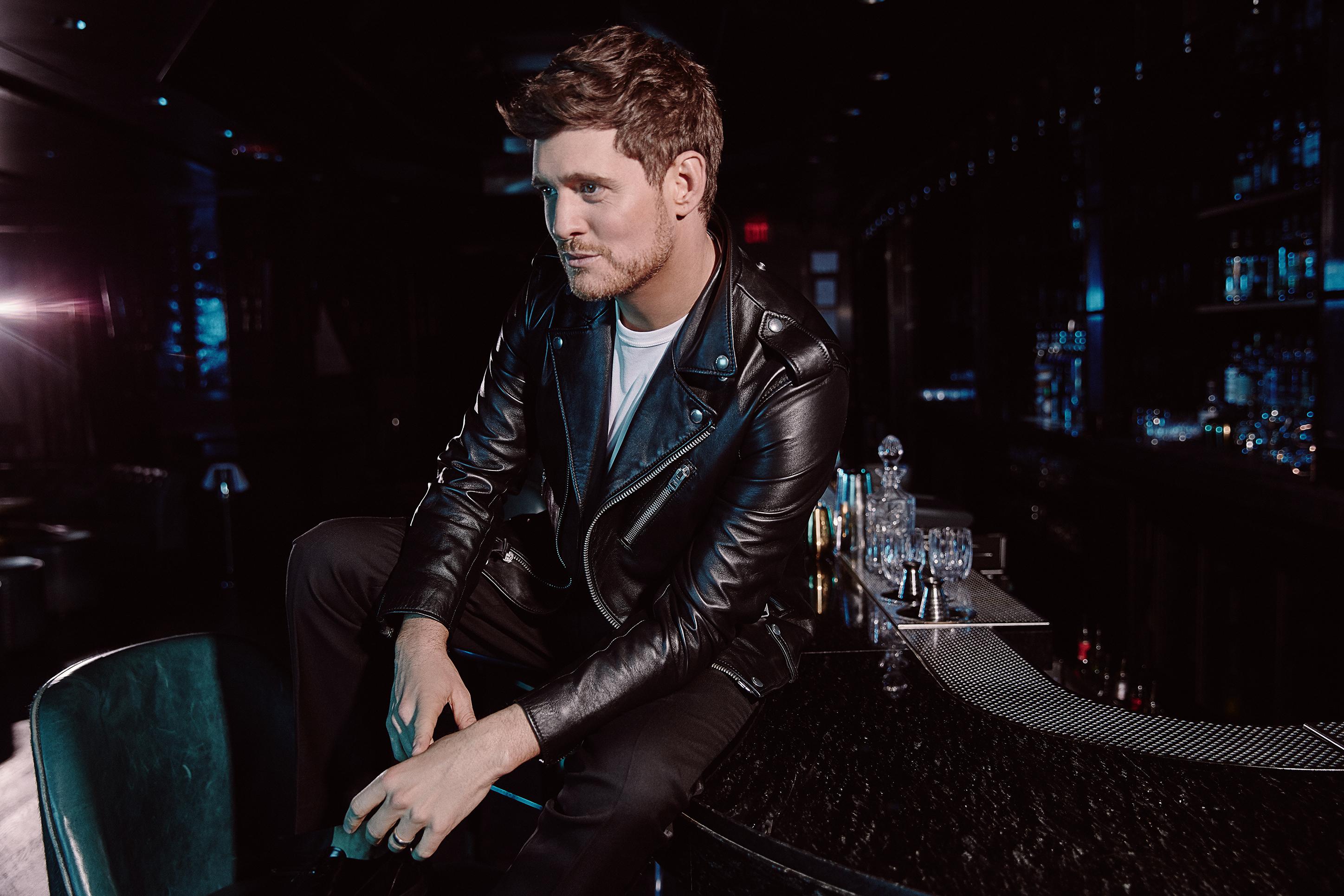 He pulled out of hosting the 2017 Brit Awards after he found out his son was ill.

And Bublé — who has won four Grammy awards and sold more than 75 million records worldwide— didn’t know if he would ever perform or sing again.

He says: “That time was hell. But with my career I’d already started losing the joy and was wondering why I was making music.

“All those things I thought were important. All of it. The results. The fame. The ego. I was questioning it all.” 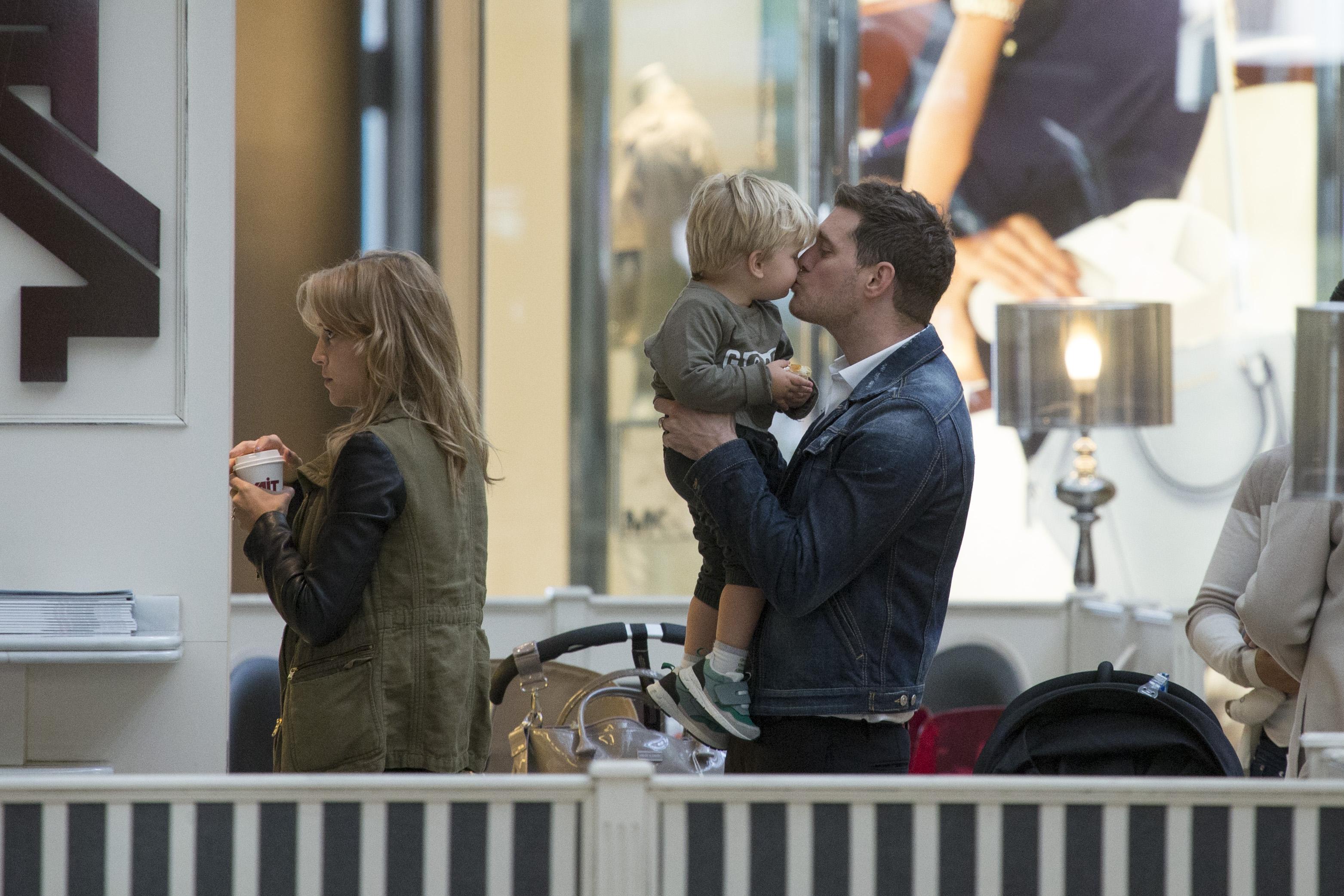 I meet the charming Bublé in a plush Santa Monica hotel at the start of his comeback promotional trail. Looking dapper and trim in a navy fitted suit, he is joking with a TV crew and looks happy.

“I’m just thankful I’ve got this second chance to do what I love and to appreciate it properly,” he says as we sit down to chat.

“After everything I’ve been through with my son, I realised that fame and everything that is associated with it simply doesn’t matter.”

The singer says that when Noah recovered from the illness and got the all-clear, he still didn’t have any plans to make another album. 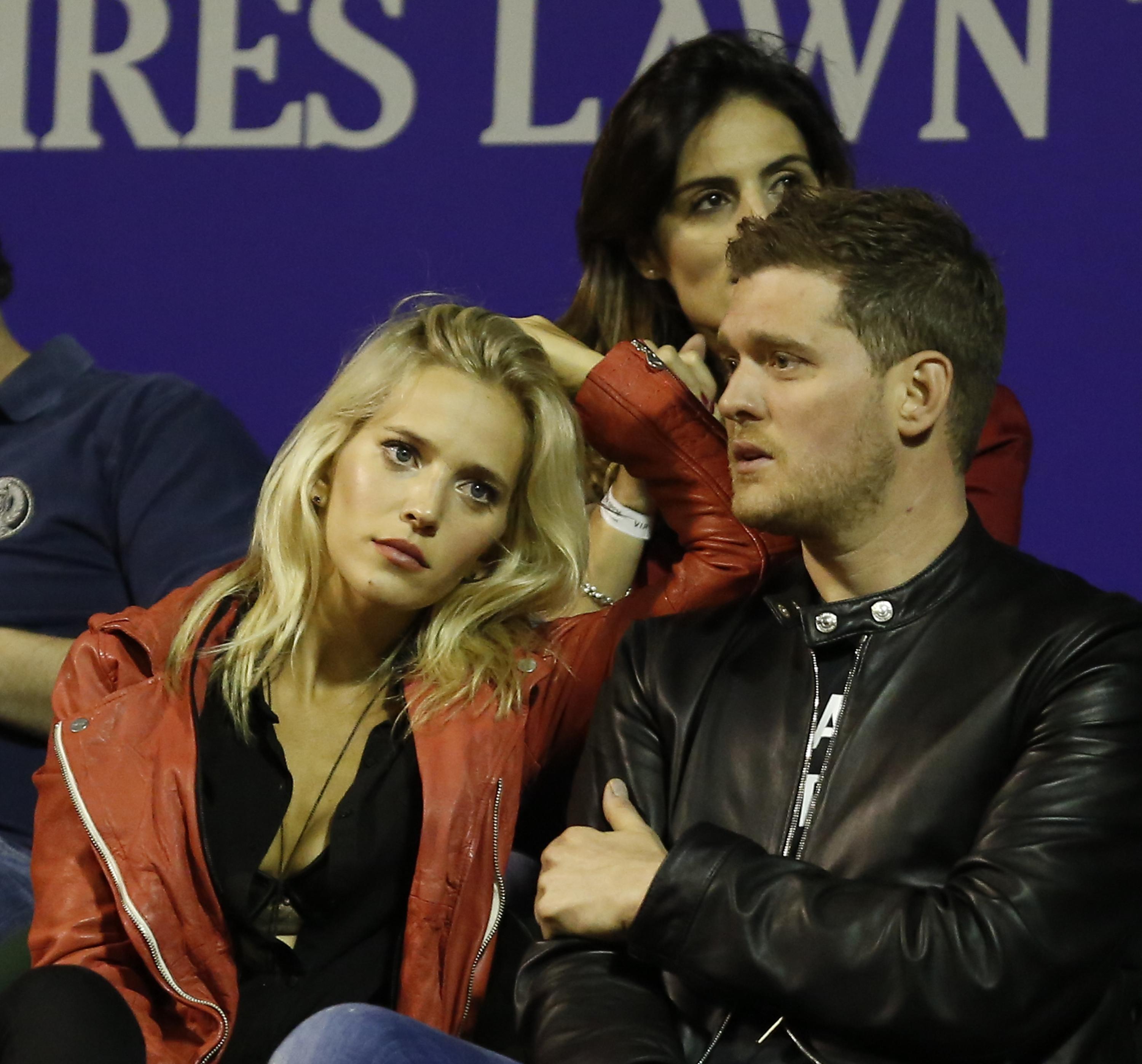 In April last year, his wife Luisana, 31, broke her silence to speak publicly about her son’s “miracle” recovery.

When the Argentinian actress returned to her home country for a brief visit, Bublé got his bandmates over to his house for the weekend.

He says: “When things started to be OK and back to as normal as normal could be, I invited my musicians to Vancouver.

“It was basically a three-day boys’ hang-out where we got drunk. 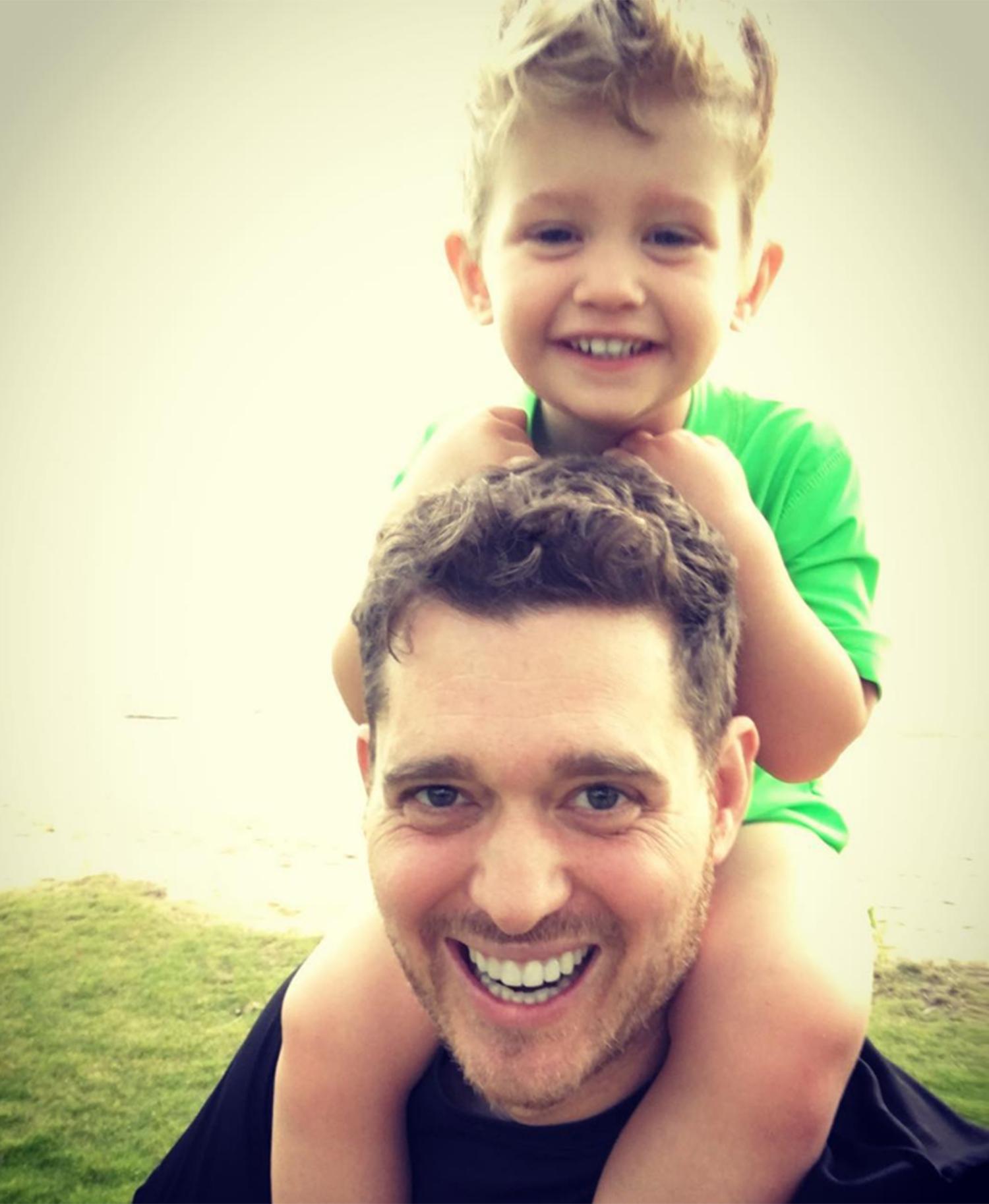 “We ordered Indian food and pizza and played video games.”

He whips out his iPhone to show me a video.

"And this was the moment, the time I knew I was going to be alright,” he says, showing me a recording of him and friends singing and laughing.

“It was just finding the joy again,” Bublé adds. 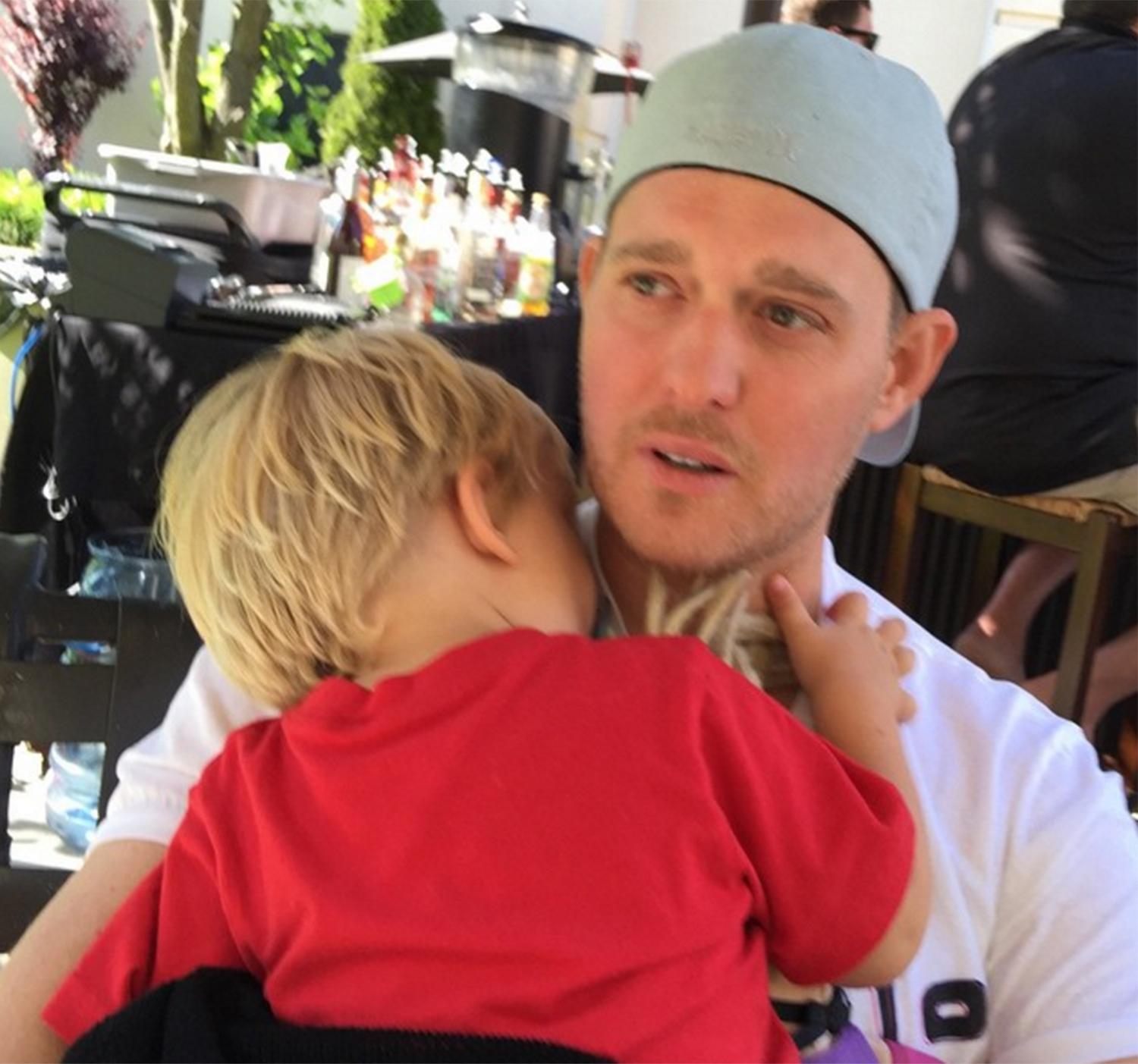 “I remembered the bliss of being a creative person. That day the album came together without me ever trying.

“There was no effort — it just organically happened. Look — this is us singing that day. I’ll admit it, we were f**king hammered.”

Love includes classy renditions of classic songs such as When You’re Smiling, When I Fall In Love, I Only Have Eyes for You and Help Me Make It Through The Night.

“All the songs were done in just one take,” he says proudly. 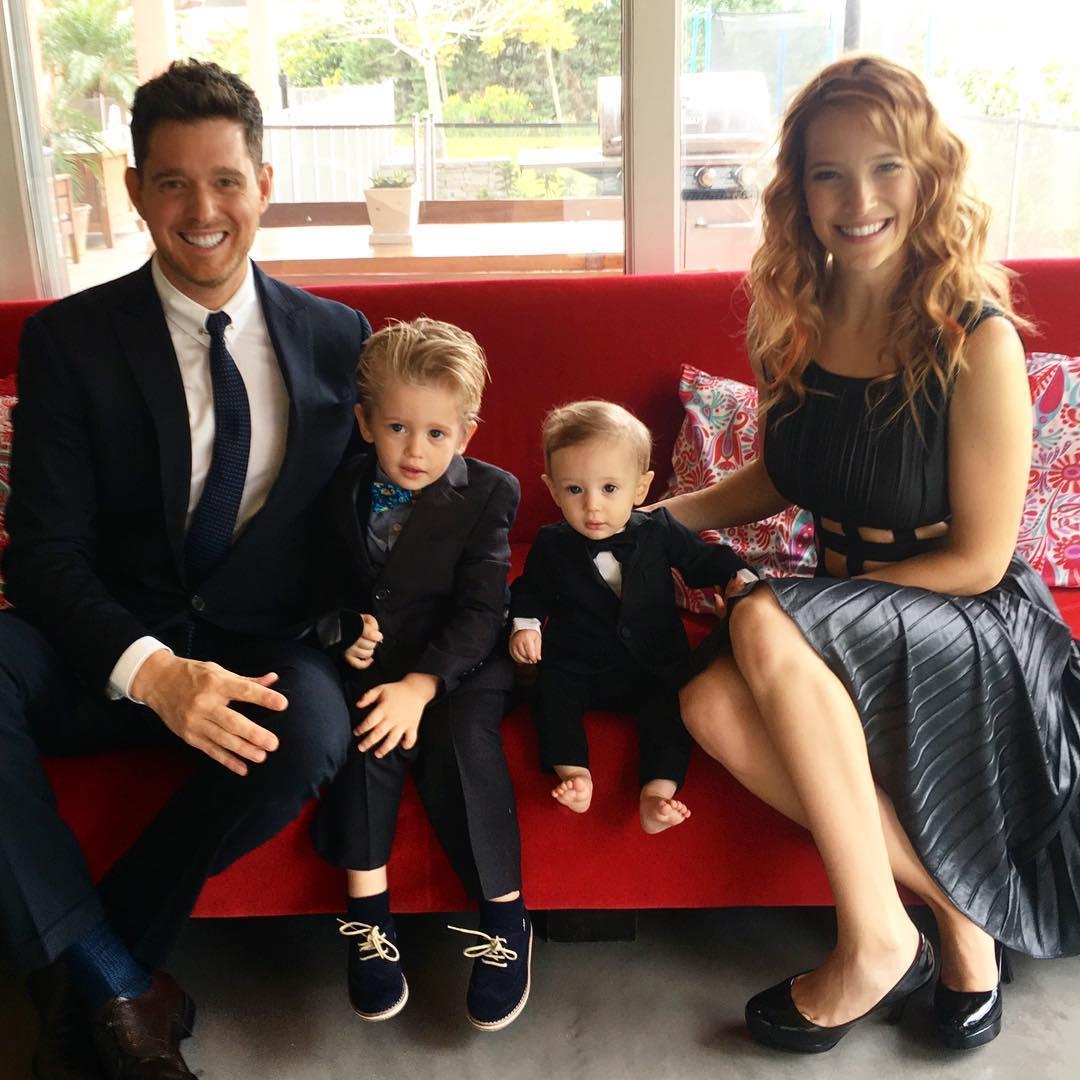 “And I believe these songs chose me, I didn’t choose them. Although there is positivity and a sense of hopefulness, happiness and joy, there is also a lot of melancholy. They are a complex range of songs. Even the opening song, When I Fall In Love, people hear it and say, ‘It’s such a lovely song’. But it is about loneliness.

“There is also sadness in Love You Anymore (written by Charlie Puth) as it is about a relationship that has ended.”

Central to the record is original song Forever Now, penned by Bublé, which he says was “inspired by being a dad”. 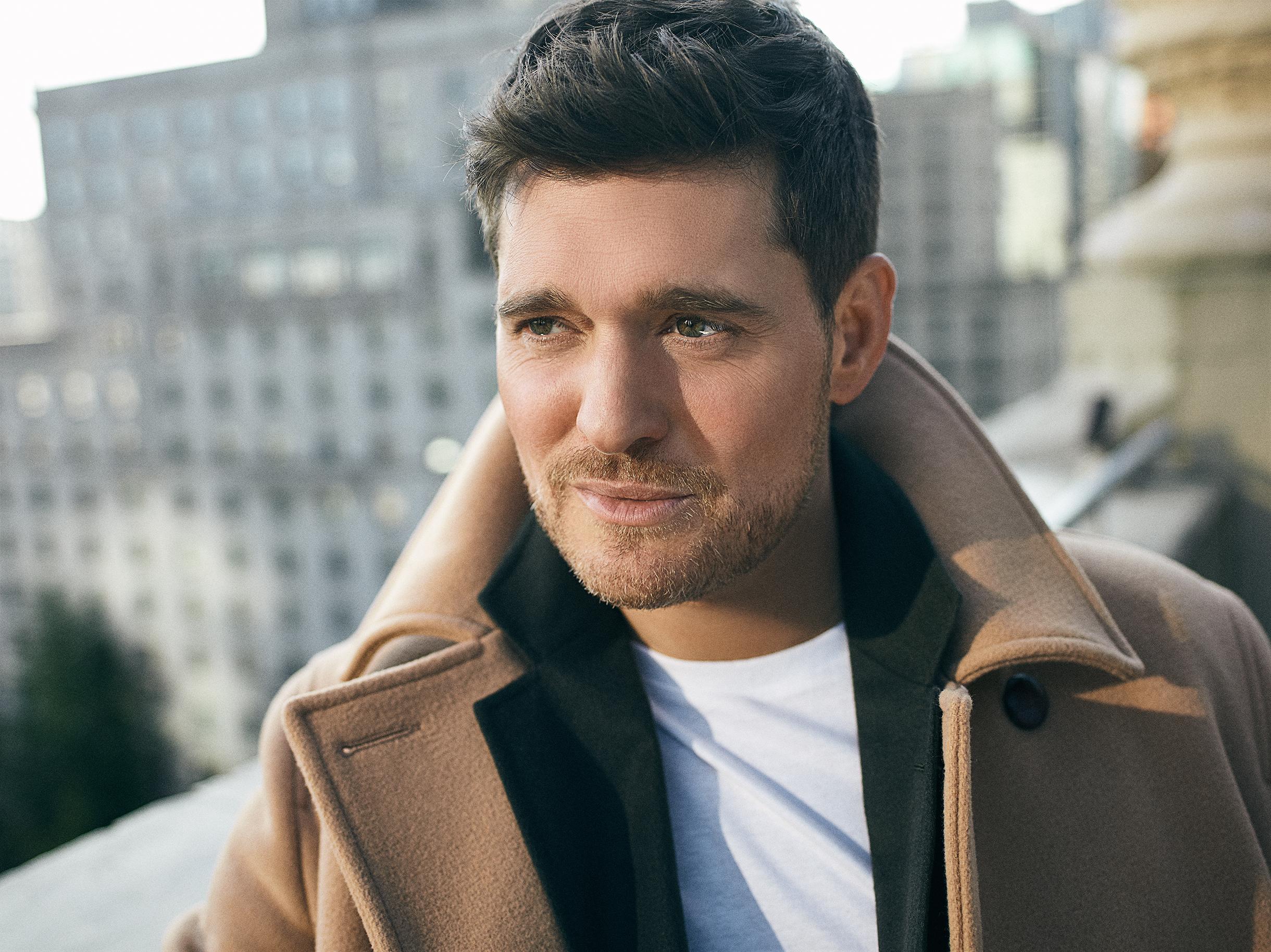 Bublé says: “I played David some songs that I’d written. When I played Forever Now he said it was the greatest thing I’d ever done and I needed to put it on the album.

“I’d not been sure about putting it on there, if I’m honest. It’s a difficult one for me but I listened and it’s on the record.

“I hope that one day I will be in a place where I am strong enough to sing this properly live.”

When it came to naming the new album, Bublé says there was only ever one name for it — and that was “love”.

“I kept speaking to people about love,” he says.

“I was telling people that I didn’t have much room for anything else but love in my heart and in my life.

“It was the most succinct way to say so much with one word. Love is what the album is about. 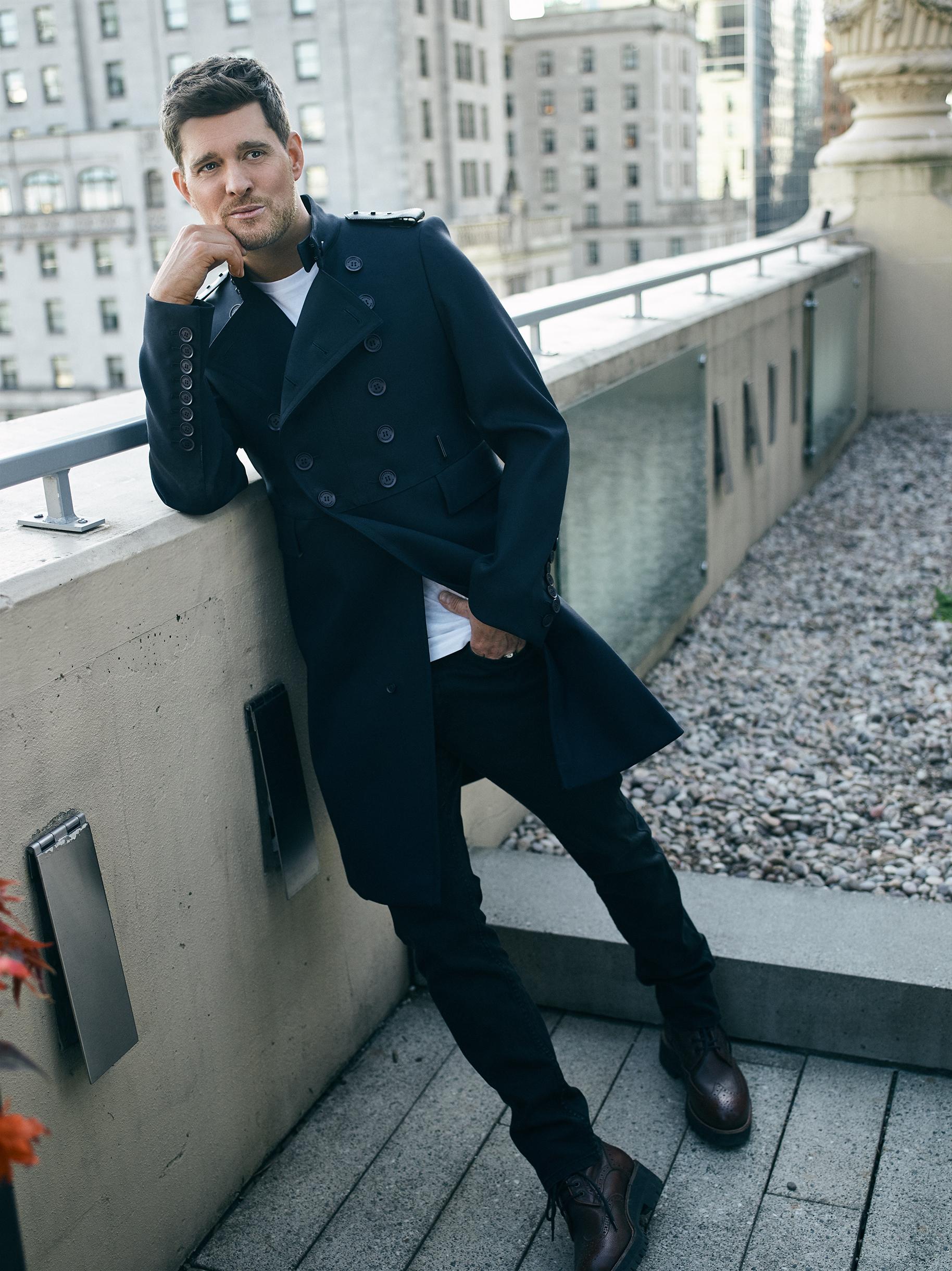 “You can have all the money in the world, but you can’t bide time.

“I’ve been able to be here today with you because of love.

“It’s the love and support of your family that keeps you going and allows you to find joy in the darkest places. 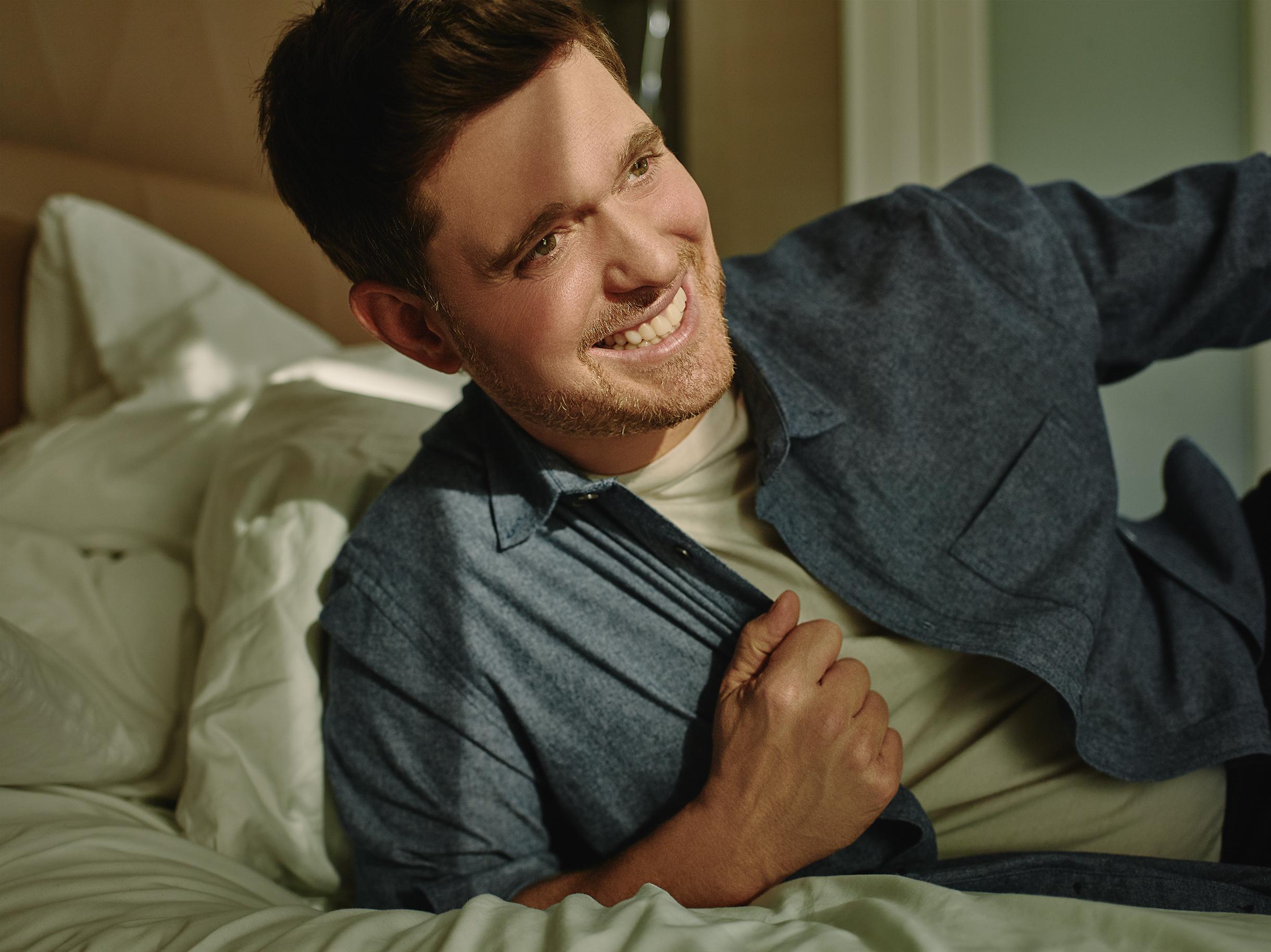 “And because of the experience I’ve had, my ability to tell the story in a deeper way, I just seem to be able to access those feelings.

“It’s funny because I realise that now, as I look back on this record now that it’s finished.”

Bublé made his long-awaited return to the stage at Dublin’s Croke Park and London’s Hyde Park in July.

Reflecting on those concerts, he tells me: “I was so grateful for those shows and I took in every second of it. 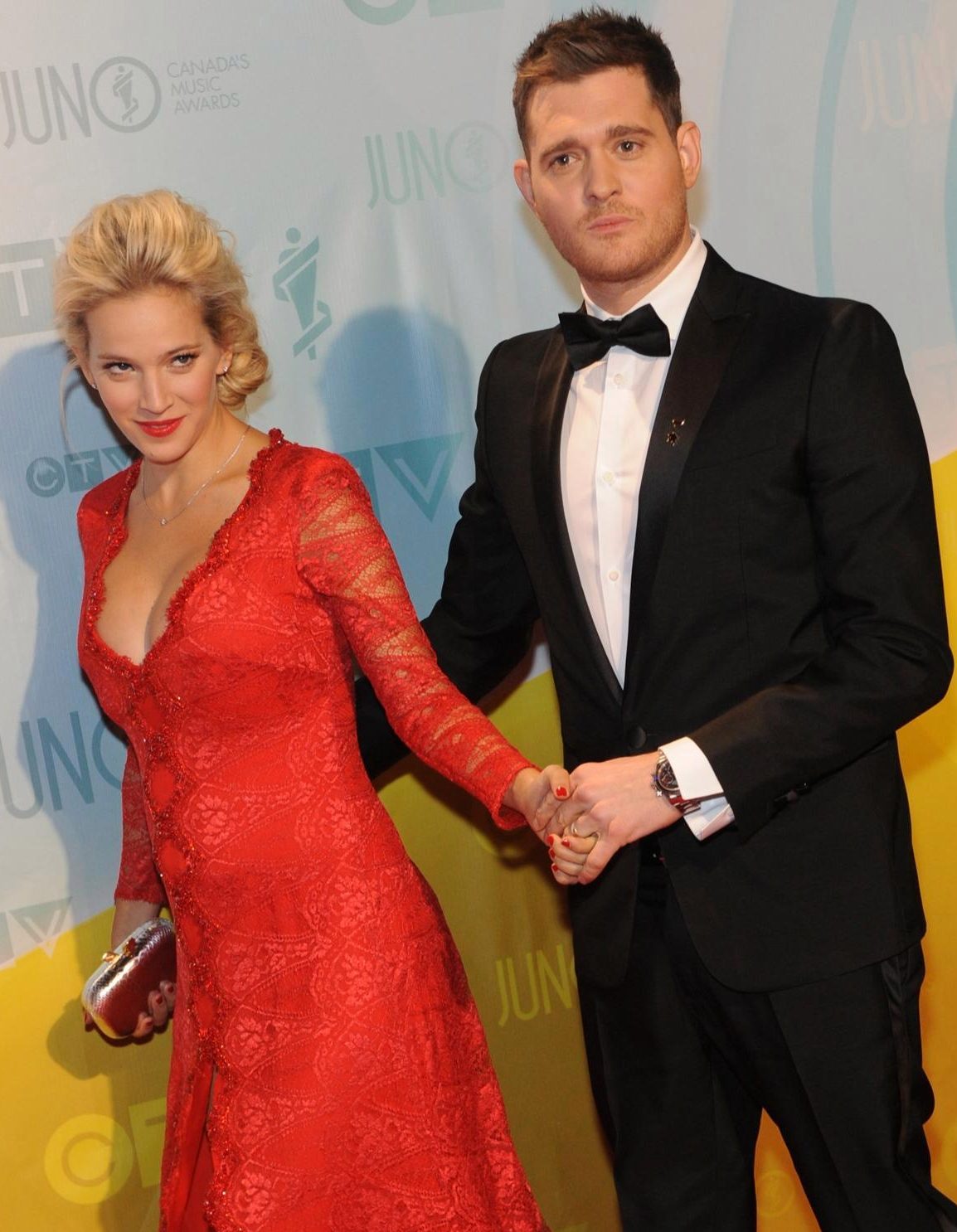 “I’ve been overtaken by the emotion and by being as present as I can be when I perform.

“Those shows were special and now I have a different perspective. I am finding joy in moments and in places that I didn’t know that I was as present as I am now.”

In October, Buble was emotional when he appeared on a special edition of Carpool Karaoke with TV host James Cordon for Stand Up To Cancer.

Is it important, I ask him, that he used his celebrity to help other parents and children going through the same experience as his family?

“I don’t think there is anything you can do or say that will help when you are in it,” he replies.

“Everyone processes things differently. That was my motive of survival to try to be positive.

“I would prefer to let my actions speak louder than my words when it comes to my dedication or sense of compassion towards family and people that are going through their own disasters in life.

“I think that it’s more important for me to make sure that when I give my time or my love or my empathy that the reason is because I have love to give and not because there is any chance of exploiting my son. 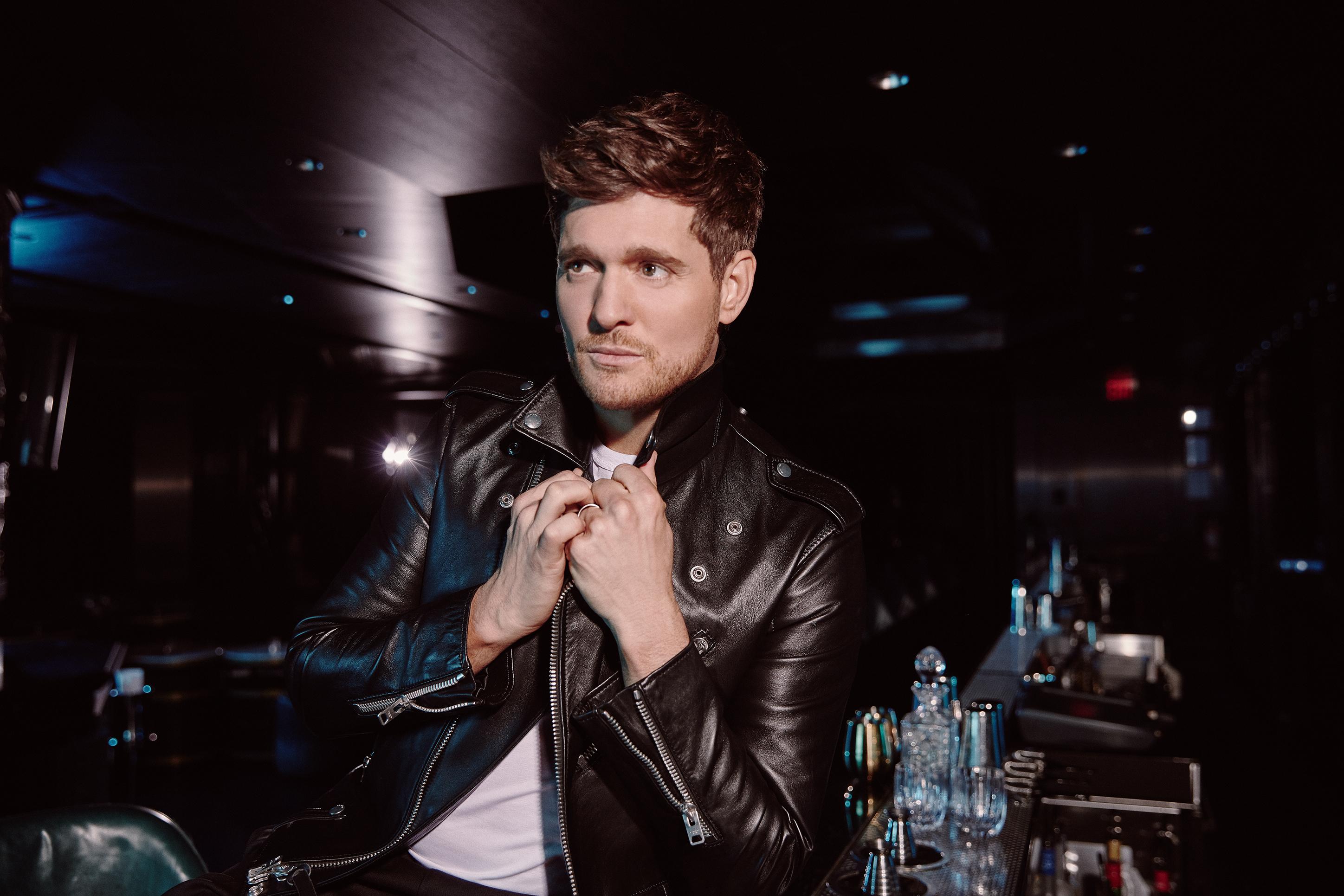 “When it comes down to it, only I know the purity of my actions.

“I hope I don’t sound like I am trying to be too mysterious about it.

“I just think when you give, you shouldn’t give so that people know that you are giving because you know, it’s the real deal.”

Next year Bublé will go back on the road and he vows to enjoy every minute of every performance.

2. I Only Have Eyes For You

8. Help Me Make It Through The Night (ft. Loren Allred)

He says: “Everything has changed for me and everything I do from now will be cherished. And that includes my music.

“It sounds like a cliché, but my wife and me are excited to look ahead.

“We are excited for the memories that we are going to create at Christmas.

“We are excited for the things that we are going to see in the next year like the first time our daughter crawls or her first words. 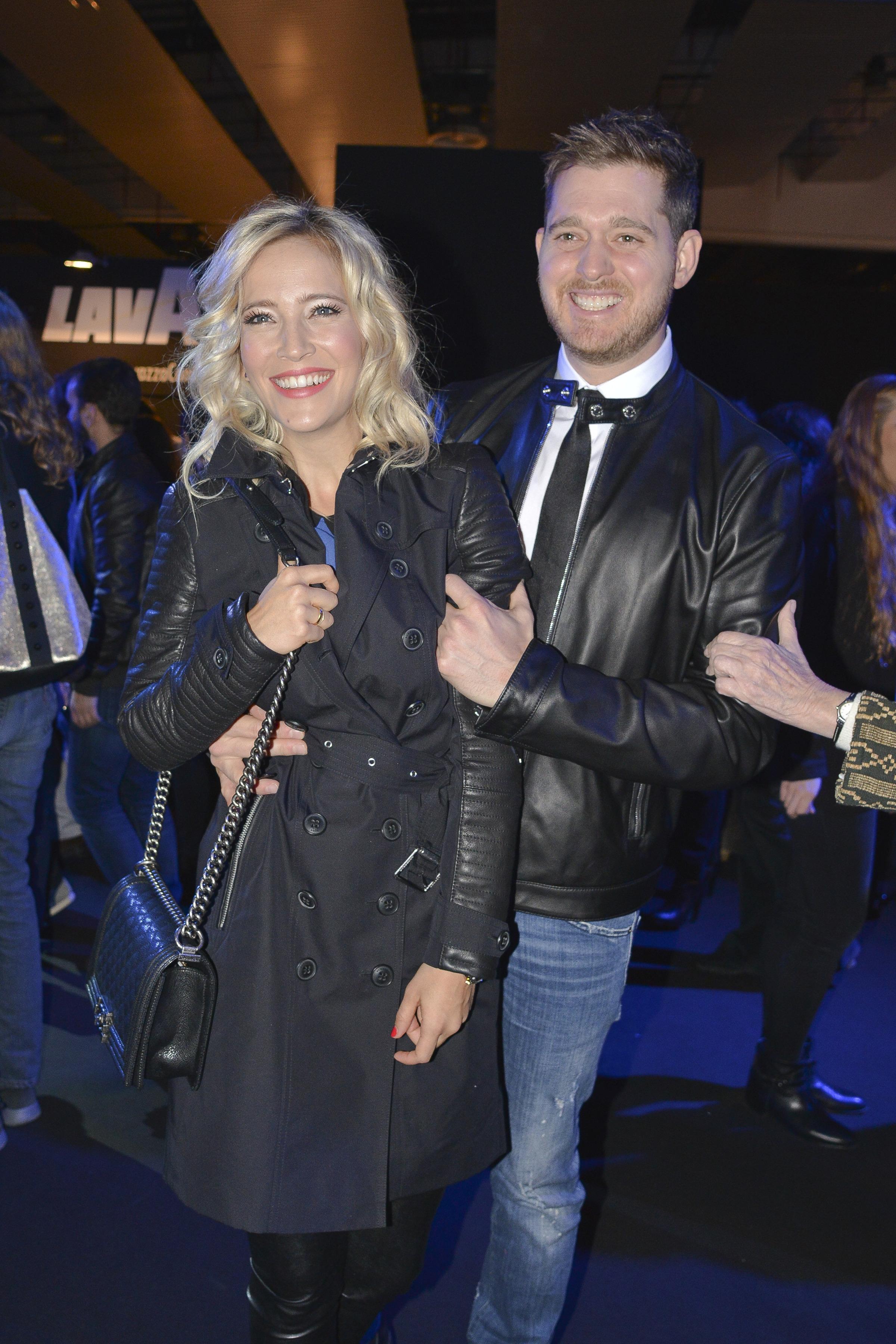 “It’s an extra-special Christmas for us this year. My sister is pregnant, so we are so excited to add another one to the family.

“My mother-in-law has been living with us and the kids love being with grandma.

“I was gone a long time but I needed to be with my family. There is nothing better than being with your kids and watching The Gruffalo or drawing or wrestling — just being a normal guy.

“But I’d be lying if I said there wasn’t a small part of my identity that I felt was missing.

“I love what I do. I really do. I cannot stifle the need to express myself. Singing is the essence of me. And now things are so clear for me. Knowing not only what I want to do, but also how I want to do it.

“Making music is not about being result-driven.

“It must be pure and organic and about love and relationships.

“I have no idea how well my album has done or how many hits I’ve had. 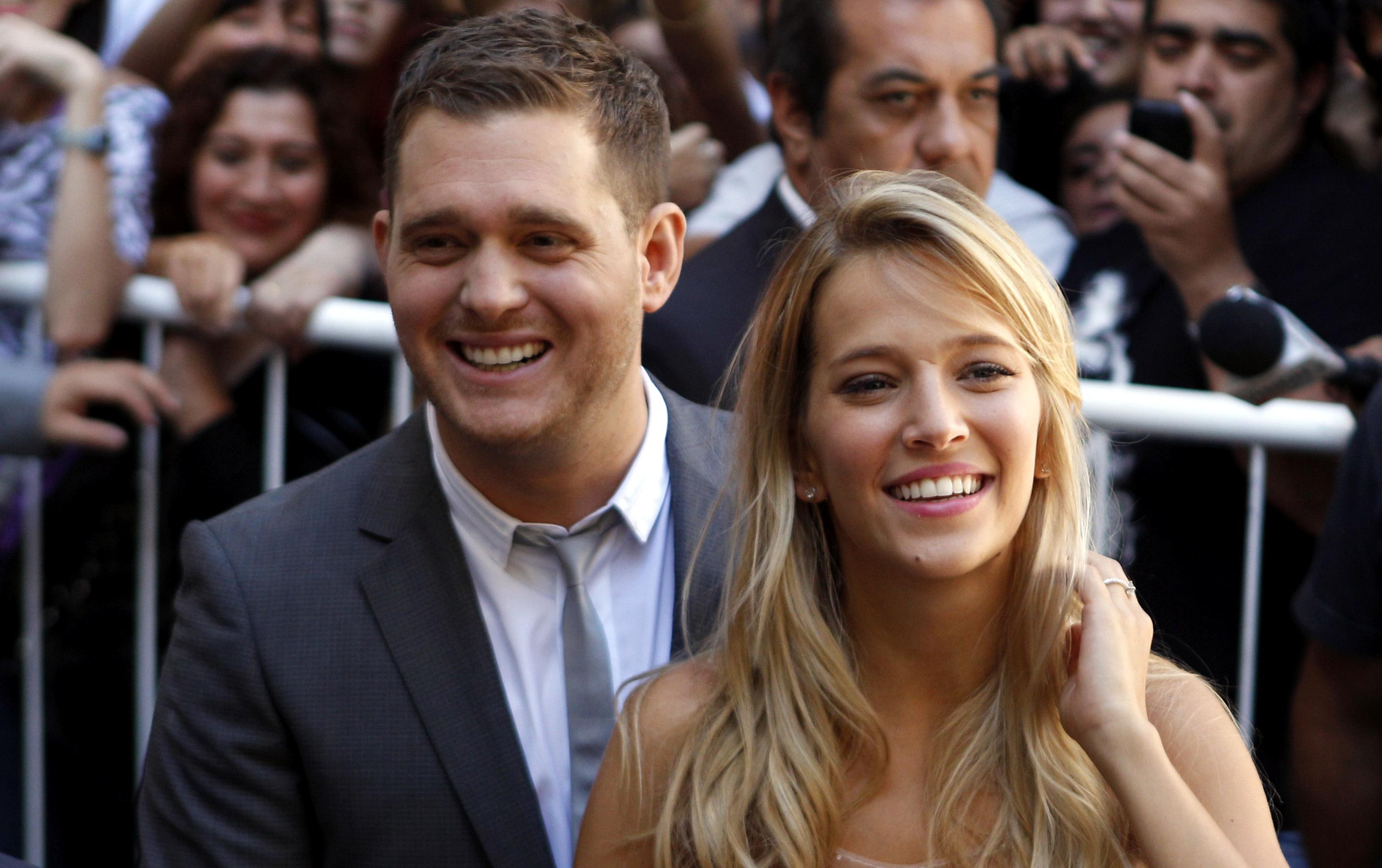 “What’s important is that I don’t want to know. I just want to make music and be happy and present.

“And when I’m on stage, that I have a genuine connection with the crowd and be genuinely happy.

“I don’t have the room to have any negativity. A lot has changed.”