Michael B. Jordan is currently being embraced as the star of “Black Panther” and the “Creed” franchise, but he’s been in the business for 20 years — the last five of which have catapulted the 31-year-old actor to a previously unknown level of stardom. And now that he has it, he intends to exploit that power to the best of his abilities.

“It’s fucking insane, bro,” he said. “All my friends and family are like, ‘Mike, you gotta let your mind catch up to where you are.’”

Where is he? Apparently, everywhere. He’s at the end of an extraordinary year that will see him Oscar campaigning for “Black Panther” — the Marvel movie with a nearly all-black cast that has a real shot at multiple nominations, including Best Picture (and may even be the frontrunner). “Creed II,” which he executive produced, further minted Jordan as an A-list lead, and has already earned $100 million worldwide.

He also starred in (and executive produced) HBO’s “Fahrenheit 451,” and took another executive producing credit on the Lionsgate sci-fi thriller “Kin.” (That one starred Myles Truitt; Jordan appeared as “Male Cleaner.”) Currently in post is “Just Mercy,” a biopic of world-renowned civil rights defense attorney Bryan Stevenson in which he stars (and executive produces) opposite Brie Larson and Tim Blake Nelson, directed by Destin Daniel Cretton (“Short Term 12”).

It’s not like he doesn’t realize his power and influence. However, as he said, experiencing it is a little like the moment immediately after a blow to the head.

“I guess I’m going through a process of finding out what I’m comfortable with,” he said. “As a naturally reserved and quiet person, it’s definitely a challenge being thrust into this atmosphere of celebrity and everything that comes along with that. Some parts I’m resisting more than others, but can’t for much longer, so I’m just trying to find a way to make sense of it all.”

Most difficult for the actor is determining how much of himself to share with his fans, especially on social media. But in an era of clickbait journalism, Jordan realizes that he has to take control of his own narrative.

The actor recalled his frustration over a recent Vanity Fair profile that implied he was ignorant of black mythology, which led to widespread public censuring. “I could say a million things in this or any other interview, but the headline will be something that has nothing to do with what the article is about,” Jordan said. “I’m like, we just had a fucking three-hour conversation about so many amazing things, but the only thing that you highlight is this one part. And then people just retweet a quote that’s taken out of context, and all of a sudden it’s fact.”

In an effort to control that narrative, the actor recently hired a videographer to capture moments of his life and create short-form content that he will share with fans via social media. He emphasized that it’s not a vanity project; it’s also meant to address a personal weakness. As a diary of sorts, it lets him relive moments that he may otherwise not enjoy, or recognize the significance of, while experiencing what he acknowledges are a series of once-in-a-lifetime opportunities. 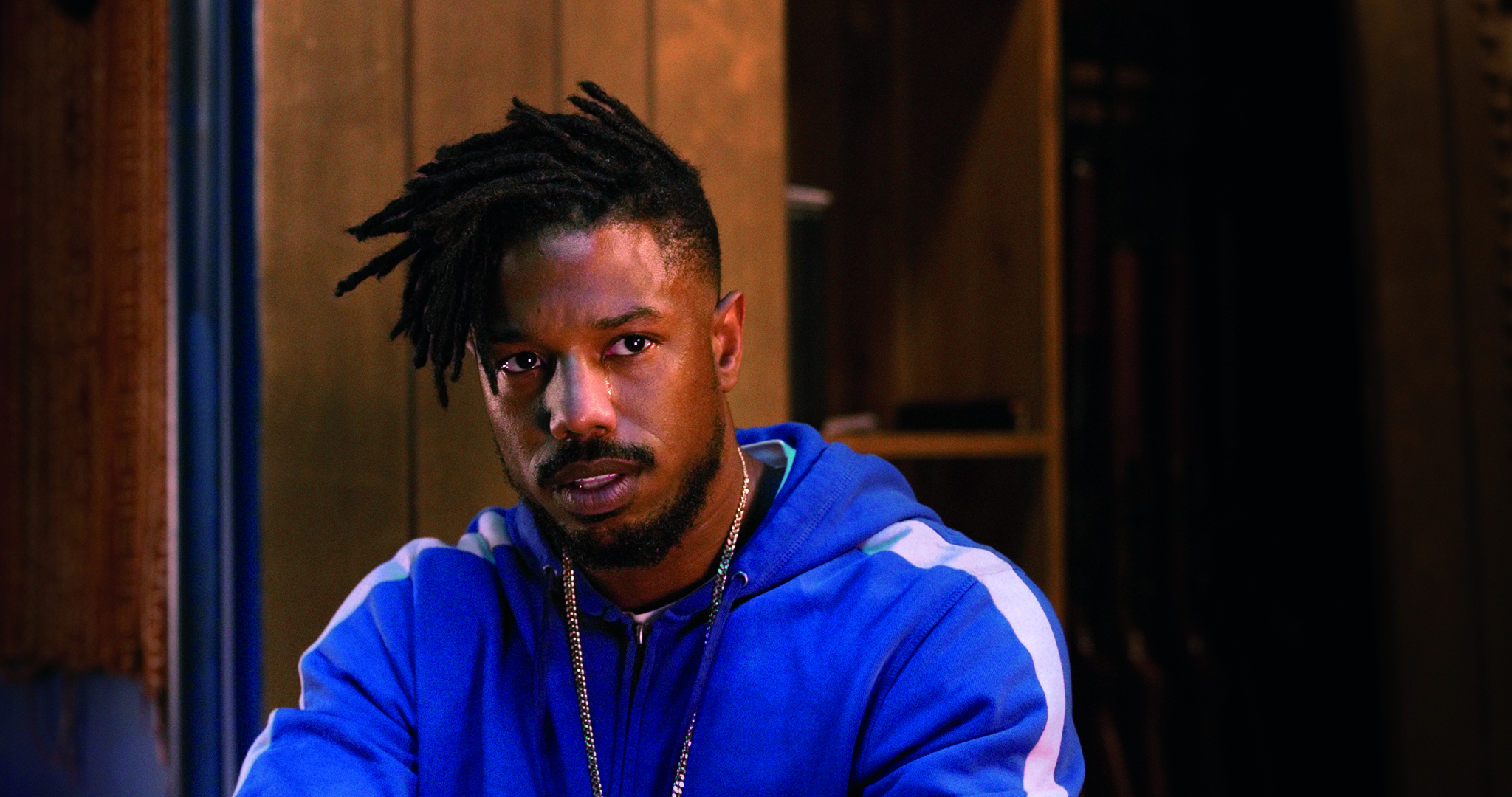 “There’s just so much happening, so fast, that I can’t even really stop to enjoy right now,” said Jordan. “Look, I don’t know what’s going to happen in 30, 40 years. So I just want to have these moments to be able to look back on. Especially those smaller moments between the big ones, you know what I mean? They might not seem significant in the moment, but then, years later, you realize that they actually were.”

Jordan is familiar with the Hollywood rollercoaster. His first role (as “Rideland Kid”) came in 1999, on HBO’s “The Sopranos;” in 2002, he returned to the network in a recurring role on the first season of “The Wire.” From there he spent four years on ABC soap opera “All My Children” (as Reggie Porter Montgomery, a gang member adopted by pool boy-turned-attorney Jackson Montgomery), three years on DirecTV’s “Friday Night Lights,” and two years on NBC’s “Parenthood.”

In a bit of self-deprecation, the actor describes his current life as “Michael B. Jordan, Phase Two.” He’s even trying to make the transformation a physical one, mocking his own attempt to grow facial hair. “I just got a beard, man,” he said, massaging his jawline. “Finally! Ryan [Coogler] has got the whole thing growing all out. I’ve never been the guy that could ever grow anything, so this is major for me.”

The real shift comes with changing his own work habits: Next year, he won’t appear in any features. He’ll voice the Rooster Teeth animated web series “Gen:Lock,” and executive produce the mother/son superhero series “Raising Dion” at Netflix (he has a recurring role). At OWN, he’ll be a full producer for the first time on the coming-of-age drama series “David Makes Man,” from Oscar-winning “Moonlight” co-writer Tarell Alvin McCraney (Jordan will not appear in the program).

“I came to the realization that I can also satisfy my creative side by giving somebody else a chance,” he said. “I don’t have to be in front of the camera for every project. I think that’s part of my evolution; realizing that I can say ‘no’ to things, even when I’m faced with that lull that comes between projects, and I get anxious because I feel like I need to be constantly working.”

For Jordan, there’s no greater touchstone than Coogler; they’ll next team on “Wrong Answer,” which was adapted from a New Yorker article about the scandal surrounding an Atlanta math teacher when he sought school funding by altering his students’ test scores. He said the director is family.

“We’re real close, and because of that, I’m real territorial with Ryan,” he said. “That dude’s like my brother, man, and I want to make movies with him for the rest of my career, if I could. I want to do all his movies. I want to be the lead in all his films. Why wouldn’t I wanna get up and go to work with one of my best friends?”

Their relationship began just six years ago with “Fruitvale Station,” in which Jordan portrayed Oscar Grant III, the young black man who was fatally shot on New Year’s Day, 2009, by a BART Police Officer in Oakland, California.

Jordan didn’t have to audition for the role; he said Coogler wrote it for him, although they’d never met. Recounting the story, Jordan said when Coogler workshopped the “Fruitvale” script as a Sundance Labs fellow, he met an assistant to Jordan’s agent at the time. Coogler passed the script to the assistant, who then got it to Jordan’s agent, before it landed in Jordan’s lap.

“I read it, was fucking blown away, and flew back to LA, and immediately met with Ryan at a Starbucks,” Jordan said. “We sat down, talked, and 10 minutes into the conversation, I said I’ll do it. I didn’t know this dude, but I felt a vibe. He just oozed leadership and confidence, so I wanted to follow him, because I felt comfortable and protected already.” 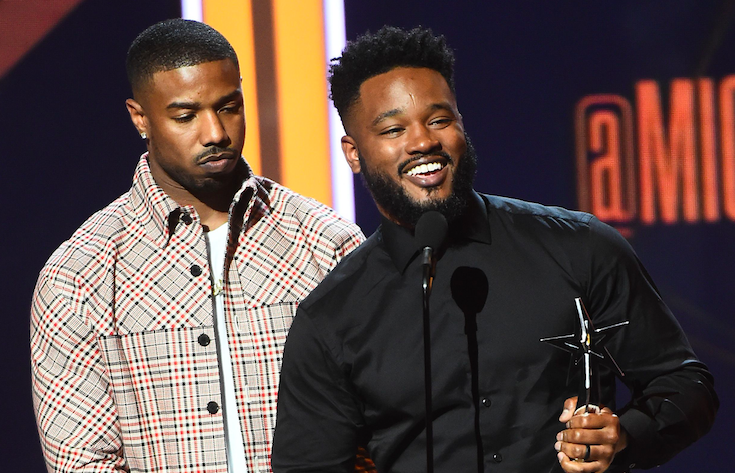 Michael B. Jordan and Ryan Coogler

They reteamed for “Creed,” which saw the $35-million picture gross over $173 million worldwide and turned the Coogler/Jordan tag-team into a force to be reckoned with. Their timing was excellent: As words like “diversity” and “inclusion” became causes célèbres, and with Marvel Studios in search of a director to shepherd its long-in-development “Black Panther,” Coogler suddenly became the obvious choice. “It’s like, everything he and I had done together until that point, was in preparation for ‘Black Panther’,” Jordan said.

As villain Eric Killmonger, Jordan acknowledged that the role had the hard edge that’s become a familiar element in the characters he’s played. “I just want to make the characters real,” Jordan said “Killmonger, with his background, that’s just who he was, man. I mean, as with every actor, every role we play has a piece of us in it. That’s what makes them personal. And, bro, as you likely know, being a black man in America right now makes you automatically have a little chip on your shoulder. You see that in Killmonger.”

Despite proclamations that he’s the “next Denzel Washington” — a suggestion strengthened after both actors sat down for a high profile April 2018 tête-à-tête, captured by the New York Times in an account titled “Passing the Torch” — Jordan eschews comparisons. “I understand why people do it,” Jordan said. “They always try to compare somebody who’s a staple, to somebody up and coming. Like in basketball. Where’s the next LeBron James? Where’s the next Michael Jordan? Who’s the next Kobe Bryant? That’s just part of the game.”

He does consider Washington an idol, as well as Leonardo DiCaprio (who’s at the top of the list of actors he’d like to work with) and Tom Cruise, all A-list actors-cum-producers who’ve enjoyed career longevity.

“You borrow from the greats and you make your own path, without losing the core of who you are,” he said. “You look at Tom Cruise for example, he’s been in this thing for almost 40 years man, since he was a kid, almost kind of like me, doing a mixture of small films that really hit home and have messages, and bigger, action-packed, fun studio movies. I love that shit!”

Topping his filmmaker wishlist are David O. Russell, Alejandro González Iñárritu, Barry Jenkins, Ava DuVernay, Paul Thomas Anderson, Ben Affleck, Patty Jenkins, and Jennifer Yuh Nelson. “There’s so many,” Jordan said. “I want to have the type of career where I’m able to come in and collaborate with any of them, in any genre, and kill it!”

He also plans to direct a feature in the next few years, with two projects already in development. (He wouldn’t discuss either.) However, he recently went behind the camera with mentor, acclaimed music video and commercial director Paul Hunter, to direct the official campaign for Bacardi’s new Premium Collection, “The Angel’s Share.”

With varied interests that include gaming, comic books, animation, visual effects, marketing, and even education and cookery, long term Jordan plans to build a multi-faceted, self-sustaining media ecosystem. Citing NBA star and blossoming media mogul LeBron James as a model, Jordan envisions a one-stop shop that caters to a myriad of trades, which he sees as necessary for brand longevity.

“I think about this every day because it constantly evolves, since I’ve checked off so many boxes I’ve dreamed about,” Jordan said. “I feel like I’ve hardly scratched the surface of the things that I want to do, the opportunities and new paths that I now see, that weren’t evident before. I want to have my hands in a whole bunch of different things, where I can write, create, incubate, put on other people, help different brands and everything else, since I’m now in a position to do all of that.”

Amidst all this frenetic empire building, is he genuinely happy? After a brief contemplation, Jordan conceded that he is, but has yet to fully appreciate the experience.

“I’m happy, man, but I can’t wait to start living for me, though, like really living,” he said. “Right now, I’m in grind mode, non-stop. But I can’t wait to really start feeding my soul, and just really start working on who I am on the inside. Because, to be honest, I have not done the best job at that so far. I think that’s why I’m working so hard, so I can hurry up and get to that part.”