Mr Hancock appeared on BBC Breakfast to announce an all-new coronavirus testing plan being unrolled and trialled in specific areas of the country today. However, BBC’s Jon Kay didn’t seem to shar ethe enthusiasm about the new tests as the Health Secretary as he probed for answers on when this “rapid” testing would be implemented nationwide. When Mr Hancock failed to give a specific date, the two found themselves embroiled in a heated back and forth.

“I’m sure a lot of people will welcome the news that there’s this rapid testing and being trialled to be rolled out,” Jon began.

However, he added that several BBC Breakfast viewers found it “shameful” that they were still being sent hundreds of miles to find their nearest testing facility in the meantime.

After Jon labelled the situation a “nightmare”, Mr Hancock hit back: “Well, of course the home testing route is also available – and it’s true we’ve put a huge amount of testing into areas where there was an outbreak.

“I’d say if people need a test, the vast majority get it quickly and close to home, but when those testing centres are full then obviously people are offered a test at the nearest one where one is available.” 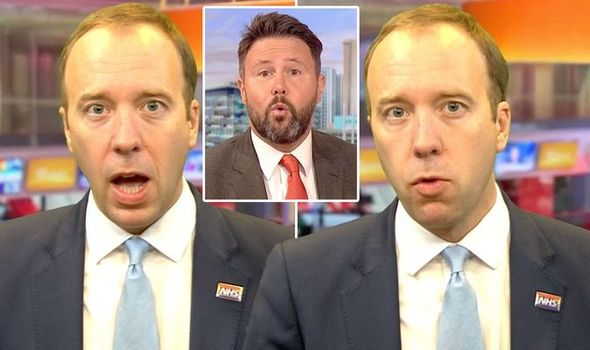 Mr Hancock added that in “any huge system like this”, there are always going to be operational difficulties.

However, he reiterated how his intention was cut out the time and the lab and have the lab “effectively be in the back of a van” which goes to those who want a test as part of the new trials.

Jon was still keen to know how long it was going to be until that testing was available to everybody, calling it “little consolation” to those who have to travel for testing.

Mr Hancock repeated that those exhibiting symptoms should get a test at their nearest facility but Jon was quick to pull him up once more. 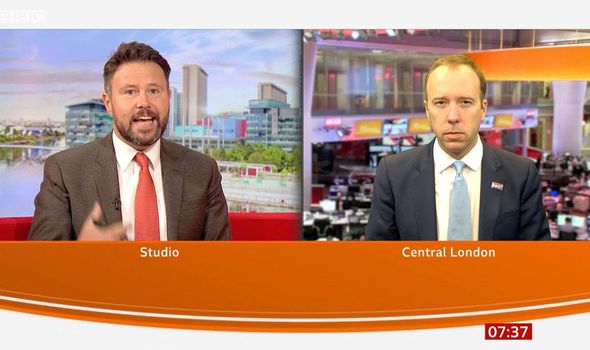 “But my question is, when is that rapid testing going to be widely, universally available?” the BBC Breakfast host interjected.

Mr Hancock revealed it would be in the “weeks and months” but again, Jon was less than satisifed.

Cutting Mr Hancock off once more, Jon said: “That’s not very specific, is it?”

Jon added: “Weeks and months sounds a bit vague, can we be a bit more specific?”

“We’ve been working with companies so they can manufacture these kits as fast as possible (and) we’re supporting them with the funding that I’ve announced today.

“All the way through this virus, I’ve been expanding that programme and I’m absolutely driving this as fast as is humanly possible.”

BBC Breakfast continues daily at 6am on BBC One.