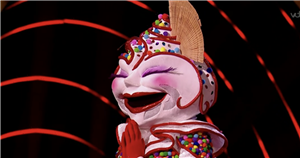 The Masked Dancer fans had an 'aha' moment after a "golden buzzer" clue was dropped on Saturday's opening show.

Viewers are now certain they've rumbled the celebrity hiding behind the mask of Knickerbocker Glory.

Twitter was ablaze with commentary after the ice cream inspired desert took to the stage to show off their moves.

Fans of the ITV programme are now convinced that Britain's Got Talent judge Amanda Holden will be revealed.

Another asked: Is Knockerblocker @AmandaHolden she mentioned golden buzzer?? #TheMaskedDancer."

Knickerbocker Glory went head-to-head with Zip but didn't manage to win over the audience.

Zip wowed viewers with their moves and stormed straight into the next round, leaving Knickerbocker Glory to face the final three.

Knickerbocker Glory will now have to fight to keep her identity a secret.

They join Beetroot who also didn't make the cut on this evenings show.

Beetroot was up against Llama who dazzled with a show-stopping rendition.

Judges including; Jonathan Rose, Oti Mabuse, Davina MaCall and Mo Gilligan were all left baffled as to who Beetroot could be.

The Masked Dancer airing every night from Saturday May 29 to June 5.