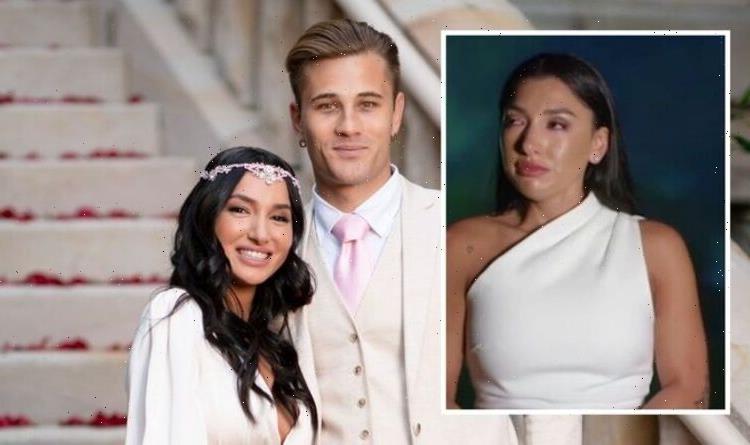 Married at First Sight Australia season nine is the latest instalment of the marriage show, wishing to bring together hopeful romantics with their true love. The show leaves no stone unturned as the couples bare all as they get to know each other at an accelerated rate. However, fans of the show were less than impressed by part-time model Mitch Eynaud when he broke Ella Ding’s heart this week.

Beautician Ella has faced her challenges with her husband Mitch and his on and off attitude toward her.

The pair hit it off when they first met on their wedding day, but things got a bit too much for the couple on the most recent episode of the Down Under matchmaking show.

Mitch reduced Ella to tears on Tuesday’s outing as he could not commit to her and their marriage at the final vows.

Starting strong, their chemistry dwindled with the final nail in the marriage coffin when Mitch said he found it “difficult to see a bright future” with his bride.

Read More: ‘You just cut your cloth’ Pensioner Sue details how she stays warm on £12K a year

Taking to social media, onlookers bashed the heartbreaker for mistreating her.

@SuchSquirrel called for her to join another reality show, and they said: “Make Ella the next Bachelorette, she is an absolute queen and deserves to find love #MAFSAU.”

Darmendran Kumar echoed what was said and added: “Can we just make Ella the next Bachelorette, please?

“This queen deserves a happy ending.”

The outpour of virtual love and admiration continued to flow.

“Okay hear me out, but Ella would make such a good Bachelorette #MAFS #MAFSAU,” @WSpark98NZ2 chimed in.

Jayne O’Connor said: “The worst thing about Mitch and Ella is she’s going to be heartbroken, and he’s not going to care at all #MAFSAU.”

@VisnjaCreates had some advice for the unlucky in love star and described: “I don’t understand why an incredible woman like Ella, w/physical beauty, emotional depth, intellect, style, class, can’t see Mitch is a waste of her time?

“Single ladies, better to be single than miserable &/or unfulfilled in a relationship Being single isn’t failure #mafs #mafsau.” (sic)

It may not have come as a surprise for some after the final dinner party ended up with Ella walking out when Mitch confessed that he would “never show affection in public” and had conflicting views with the beautician about what a marriage is.

At the final vow ceremony, the model and financial planner started with: “I came into this experiment in the hope to find a real relationship, a real connection and someone that I could build a future with being such a traditional way to find love.

“We have shared so many amazing moments together during this experiment, our honeymoon, our little dates are tanning days, movie nights, water fights.”

The tone soon changed, and he continued: “Although you and I started off strong, we definitely hit a few bumps along the way. And all these bumps all seem to have a common theme.

“It’s difficult to see a bright future with you when it seems the longer that we spend with each other, the more difficult the relationship gets.

He ended his speech with: “To stand here and be forced to make a decision that I’m not yet ready to make. I’m sorry, Ella, but right now I just can’t give you the commitment I know that you want.”

An emotional and teary-eyed Ella replied: “Wow. Throwing your own little spanner in the works. I’m not surprised. Making no decision.”

Married at First Sight Australia season nine is available to watch on Channel Nine in Australia and E4 in the UK.