Jamie Otis and Doug Hehner have been married for over six years after tying the knot in New York on the first season of Lifetime’s Married at First Sight.

While Doug and Jamie are now proud parents to their youngdaughter, Henley, and a newborn son, Hendrix, things haven’t always been soeasy for them. In addition to financial troubles over the years, they’ve gonethrough two miscarriages on their way to parenthood.

And their wedded bliss wasn’t always so, well, blissful. In fact, Jamie famously broke down on her wedding day with Doug, admitting that she wasn’t attracted to him at all. The Married at First Sight star recently took to Instagram to joke about her lack of chemistry with Doug at first—and reflect on how far they’d come since then. 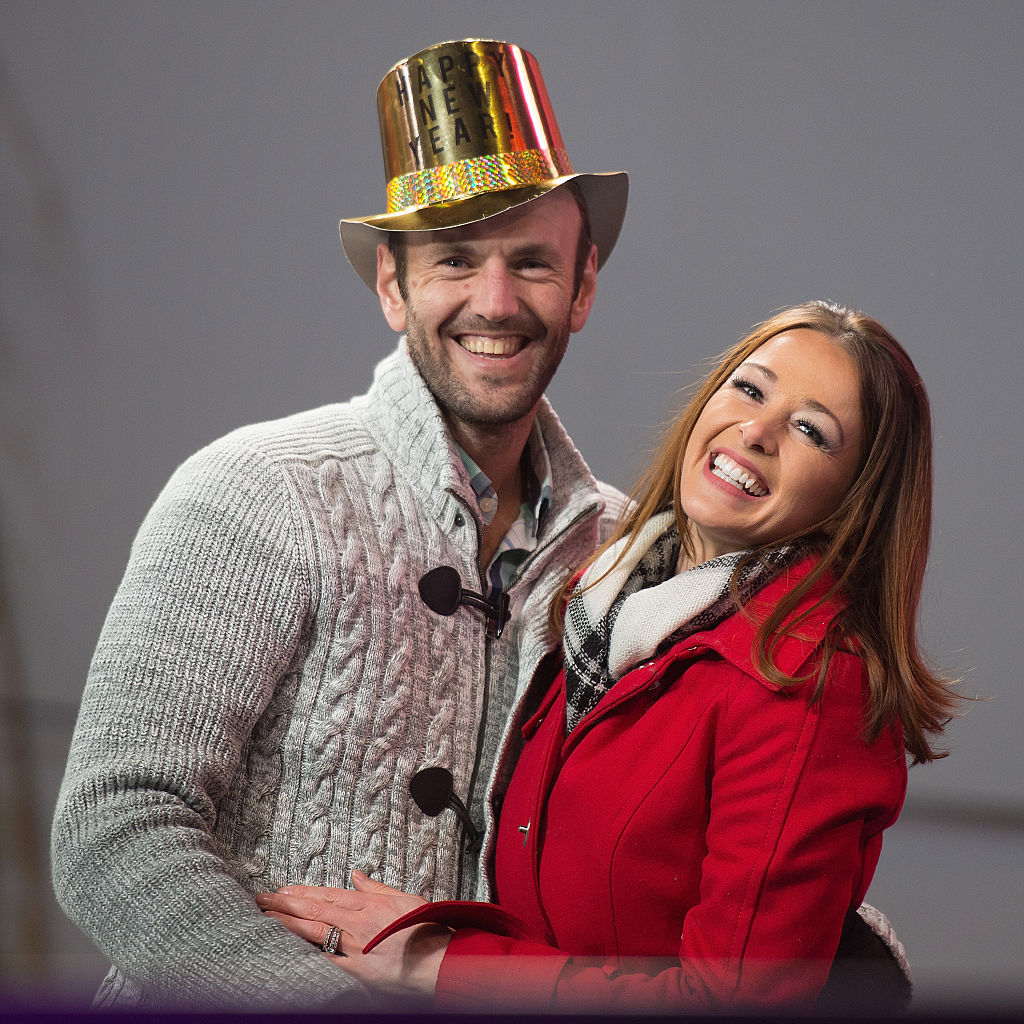 When Doug and Jamie first walked down the aisle, Doug was blown away by his bride’s beauty. But his wife didn’t feel the same way.

“This is the worst feeling,” a shaken-looking Jamie toldLifetime producers on her wedding day. “Obviously, I wasn’t like, what aknockout! I just happen to be not attracted to the guy.”

After the ceremony, Jamie seemed to fall apart before herbridesmaids convinced her to keep going and keep her head held high. “Icouldn’t even try to be elegant and graceful anymore,” the Married at First Sightstar admitted as she crumpled in the hallway in her wedding dress. “I just founda corner and started crying.”

Since then, Doug has admitted the footage hurt him. But he never took it too much to heart, and he slowly won Jamie over across time.

WE HAVE A BIG ANNOUNCEMENT!👶🏼🌈💙 We changed our sons name. We filled out his birth certificate & have officially changed it from Hayes Douglas to Hendrix Douglas.🥰⁣ ⁣ We couldn’t decide between Hayes and Hendrix our whole pregnancy.😬 We ended up going with Hayes, but the moment I pushed him out & brought him to my chest I almost blurted out, “Hendrix!”☺️⁣ ⁣ My whole pregnancy we struggled finding the “right” name for our precious baby boy. We had @sj_strum who’s a baby name expert from Europe come on our podcast and share some names and meanings … she revealed to us that Hendrix is loosely tied to Johnathan.👼🏼⁣ ⁣ As many of you know, our first born son’s name is Johnathan. I delivered him at 17 weeks & he went straight to heaven to be our little angel watching over us from above.🙏🏻⁣ ⁣ I never used to believe in spirits really, but I know in my heart that Johnathan is with us …I mean, I can *feel* him and he sends so many signs.👼🏼💙⁣ ⁣ This first photo was one of the last ones I had with Hendrix in my belly…it wasnt a “professional” shoot – it was just taken in our backyard. You can see the light shining down from above directly over my belly.🤰🏼⁣ ⁣ Then the second photo was on our baby moon. The day we woke up for our maternity shoot there was a double rainbow!🌈🌈 we couldn’t even believe it! Since I lost two pregnancies prior to conceiving Hendrix, he is considered a double rainbow…and rainbows always remind me of Johnathan.⁣ ⁣ The last sign was the day I was due with Hendrix. I had to go to the midwife for a check up and on the way home there was a random rain storm that had a rainbow! I was driving and couldn’t snap a photo but I wish I had just pulled over to grab one!🤦🏼‍♀️ It was so incredible!🥰 I mean, what are the chances?!⁣ ⁣ I could chalk it up as coincidence, but I really don’t think so! Call me crazy, but I know our angel baby sent us this sweet rainbow baby. He’s telling his parents he’s been watching over Hendrix (and Gracie) and will continue to do so.😭🙏🏻👼🏼⁣ ⁣ We are so happy to honor our angel baby & name our newborn son a name that is affiliated with his….even if it is in a very uncommon way.👶🏼💙🌈⁣

RELATED: ‘Married at First Sight’: Which Couples and Former Cast Members Appeared On the ‘Where Are They Now?’ Special? What Did They Reveal?

RELATED: ‘Married at First Sight’: Which 9 Couples Will Appear On ‘Couples Cam?’

Despite their initialtroubles, it seems like Doug and Jamie have a healthy sense of humor about howthey got their start.

Jamie and Doug are currently starring on the Married at First Sight spinoff, Married at First Sight: Couples Cam, a self-shot limited series that follows nine previous couples as they navigate quarantine and the coronavirus pandemic together. Lifetime’s Instagram account recently celebrated the nine couples’ wedding days with photos of their first kisses at the altar.

“Everyone’s first 💋 was as cute as we remembered,” the caption read. Fan favorite, memorable couples—like season 10’s Jessica Studer and Austin Hurd, season 6’s Shawniece Jackson and Jephte Pierre, and season 9’s Elizabeth Bice and Jamie Thompson—all shared passionate kisses during their nuptials. But Jamie looked visibly uncomfortable in her first-kiss photo with Doug, in which she turned her cheek (possibly to avoid closer contact).

Jamie commented on the difference, joking: “@doughehner Our first kiss was not quite like theothers.”

But Married at FirstSight fans quickly pointed out that their marriage and family werebeautiful, no matter how things started out. “But look at you and Doug now,”one viewer replied. “It’s the last first kiss though,” another agreed.

One Instagram user argued, “It doesn’t matter where it started. You have a beautiful family now. I’m really happy that everything worked out so well for you both.”

32 weeks pregnant but I look 42 weeks!🤷🏼‍♀️ And boy was I WRONG!😬 We fly home tomorrow and I’d be lying if I said I’m not scared.😷 I wish we went home a couple weeks ago, but we didn’t realize how serious this corona virus is. • I’m not one who can’t admit when I’m wrong. I believe that those who can recognize their faults, apologize, and take action to change are good people. I try not to live in fear.🙏🏻 I really believed if I just kept a safe distance & sanitized myself, my family, and everything we touched we’d be fine going out & living as normal as possible.🤦🏼‍♀️ • During the last few weeks we obvs went to the beach. We went to the pool (but found a spot 6ft away from the few others who were there). We took Gracie to the playground but made sure to wash our hands really well after. All along I was risking our family and others without even realizing it.😕 • I assumed this whole covid 19 thing would kinda just blow over like the seasonal flu, but it’s A LOT more serious than I ever could have imagined.😔 • ***I want to send out a sincere apology to YOU bc by me going out to “live as normal as possible” I was risking YOU and YOUR FAMILY.🙏🏻 I’m a registered nurse and I should know better. I’m ashamed of myself for this and I’m genuinely sorry.🙏🏻 We will not be living so frivolously any longer. • I have gloves & masks for our trip home tomorrow & of course sanitizer…to protect ourselves and to protect *others*from us and our silly choices.💯 It’ll be our last trip out for a long, long time. No matter what we “need” we will not be going to the grocery store or any other place for two full weeks once we get home. Our plan is to STAY HOME & STAY SAFE!☺️ • I hope you’re staying safe, too! We will all get through this together. Sending you SO MUCH LOVE & thinking of YOU!💗

On Doug and Jamie’s sixthwedding anniversary earlier in 2020, Jamie once again reflected on her initial lackof attraction to and chemistry with her husband. Although they had a rockystart, the mom of two appreciated how much they’d gone through together.

“It was NOT love at first sight,” the Married at First Sight star wrote on Instagram. “I wasn’t even attracted to my groom. There were no butterflies in my tummy AT ALL.”

Jamie confessed that her lack of attraction led her to panic and made her wedding day miserable. “I legit had a full blown panic attack,” she admitted. “The minute I could get away I hunched over in tears & tried hiding from everyone…I just lost it. I genuinely thought I made the WORST mistake of my life.”

Still, the bride added, she wanted to keep an “open mind” and “give love a chance.” And over time, Doug proved himself to be the man of his wife’s dreams.

“We didn’t fall in loveimmediately. That happened s.l.o.w.l.y,” Jamie explained. “He was SO patient,loving, and respectful though. Over the next few months we built a foundationof friendship, respect, & loyalty.”

Jamie advised others in the same boat totry to allow love to grow and not focus so much on initial physical attraction.“If you’ve been searching but haven’t found ‘theone’ yet—my best advice is to keep your heart/mind open & try not to ‘judgea book by its cover,’” she recommended.

The Married at FirstSight star gushed about her “soulmate,” calling him the love of her life—onethat she could have missed out on, if she’d focused too much on that initial lackof overwhelming attraction. “If I had walked away bc I wasn’t ‘attracted’ Iwould’ve missed out on the love of my life,” Jamie wrote poignantly. “Physicalattraction can grow & true love will come over time if it’s with the rightperson. Trust me on this one!”