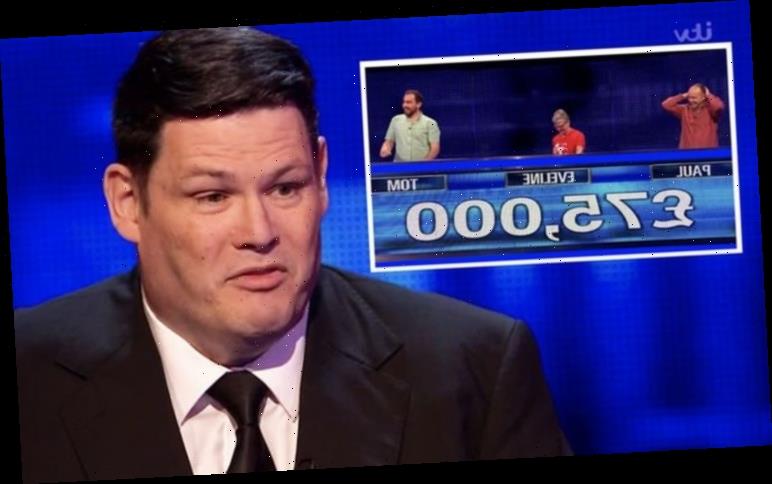 The Chase was back with a brand new series and today, Mark Labbett was in the hot seat. The Beast was not only joined by Bradley Walsh but four hopeful contestants in the socially-distanced studio. After one player took a gamble with a high offer, it seemed the quizmaster had a win in the bad with how little steps the team had. But, everything changed when Mark answered several questions incorrectly.

Tom, Anna, Eveline, Paul were taking on “the bad boy of quizzing” tonight and they had a whopping jackpot to play for.

The game kicked off with Tom accumulating £4,000 in his cashbuilder and despite a tempting high offer of £24,000, he stuck with his winnings and made it back to the team.

Anna was up next, but she was booted out after one too many wrong answers. 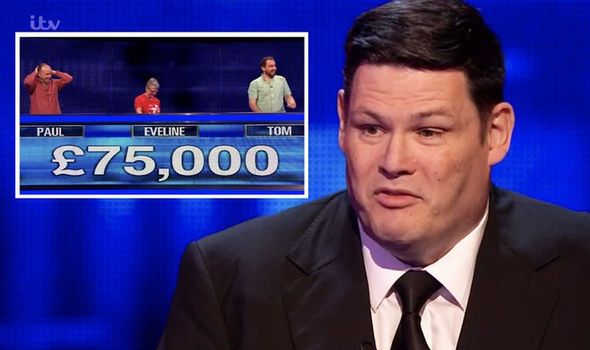 We will use your email address only for sending you newsletters. Please see our Privacy Notice for details of your data protection rights. Beat The Chasers’ Mark Labbett points out ‘distraction’ of quiz show

Those watching at home saw her seriously consider Mark’s high offer; £46,000, but she refused to take a step closer to him.

Her winnings were then added to Tom’s and their jackpot sat at £10,000.

As for how Paul faired in his cashbuilder, he only managed £5,000.

The Chase fans saw him battle it out against The Beast, but he returned and the jackpot sat at £75,000.

As for how they faired in the final round, Bradley rattled off the questions and they answered 15 which added to their 3 step head start.

“I’d say we’re two light at the moment and then we need three pushbacks, but it can be done,” Bradley remarked.

After returning from the tunnel, Mark added: “I reckon that’s a pass score. This is going to be fun.”

Those watching at home saw a tense final round to Mark, as he continually got questions wrong.

The team were given many opportunities to pushback, and they managed to secure some of them.

With one second remaining and a four step difference Mark threw up his hands and the players walked away with £25,000 each.

When Bradley turned to him for a comment, The Beast said: “On my set, I didn’t know nearly enough. Well done you guys, you absolutely deserve it.”

Fans of The Chase took to Twitter to comment on the episode and some accused the quiz master of throwing in the towel too early.

“The Beast had a shocker there #thechase,” one said.

Another wrote: “Some chase that was, Mark the beast bottled it #TheChase.”

“Beasty boy bottled it there imo #TheChase,” a tweet read.

Someone else chimed: “Mark is rarely this bad. Thrown on purpose me thinks. #thechase.”

The Chase airs weekdays at 5pm on ITV.